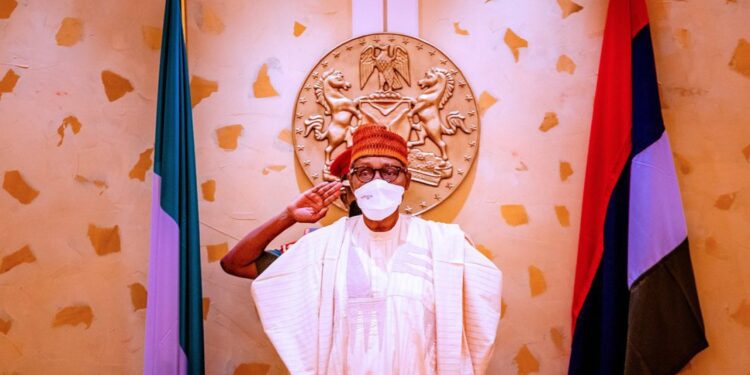 President Muhammadu Buhari has asserted that his administration has made significant improvements in three major areas, namely security, economy and corruption.

He stated that the three priorities of the administration, security, economy and corruption, have received significant attention, with measurable results, following his vision of making Nigeria more peaceful, prosperous and reliable, among nations.

In a statement by the Senior Special Assistant to the President on Media and Publicity, Garba Shehu, Buhari said this on Thursday during the Passing Out Parade of the Regular Course 4/2016 Cadets of the Nigeria Police Academy, Wudil, in Kano.

He stressed that policies and actions of his administration made an impact on the tripod vision, in spite of challenges, assuring that more will still be done to safeguard lives and property, enhance livelihood and ensure probity.

As you are all aware, this administration came to office determined to make an impact in three main areas: security, building a sustainable economy and fight against corruption. We can say that recent positive developments in these areas have shown that despite the challenges on the ground, we can see a general improvement in all three areas.

In the area of corruption, as you are all aware, I am determined to ensure that we do not have a repeat of what has gone on in previous administrations and we have taken a strong stand against pervasive corruption.

This administration has also focused on security by repositioning our national security to perform their duties effectively. We have equally embarked on some crucial changes in their funding, structure, and modes of operation. With the launching/empowerment of the Police Trust Fund, this administration swung into action after taking the assessment of needs for possible interventions in the provision of logistics and infrastructural needs of the Force.

Buhari urged the Nigeria Police Force to continually evolve on its structure and operations to make a greater impact in checking crime, particularly in the virtual space.

In a world where insecurity is constantly evolving; law enforcement responses have to equally evolve not just to keep up but to stay ahead. Also, as part of efforts to modernize the Nigeria Police Force, this Administration has intensified both international and local training and retraining of our officers and men in addition to providing new platforms and other resources.

These approaches have yielded positive results as it is glaring that Nigeria’s ranking has improved on the world Counter-Terrorism global index from 4th to 6th position on the list of the most terrorized nations.

The President said the Boko Haram insurgency, the Indigenous People of Biafra, Eastern Security Network, and banditry in some parts of the country over time, which posed a great threat to the country, had been significantly degraded and relative normalcy had returned to most towns and villages.

Buhari added that more efforts would go into ensuring that normalcy returns to all the areas suffering banditry.

Across the North Central and North West of the country, we have made progress with regards to stemming the tide of communal violence, farmer-herdsmen clashes, cattle rustling, and kidnapping.

We will continue to demonstrate zero tolerance for crime and criminality. Those who take laws into their hands, who bear arms illegally and who seek to profit from a climate of fear and insecurity will be decisively dealt with.

That remains our promise to the people of Nigeria, who elected us to keep them safe and secured. The peace and stability of our dear country will continue to be of utmost importance. You, the Police are our points men and you must rise to the occasion, ” the President told the graduating cadets.

President Buhari also commended the Commandant and the entire Academy community, for the excellent work, raising new generations of Police officers who will tirelessly secure the nation 24/7.

In his remarks, the Commandant of Nigeria Police Academy, Assistant Inspector General (AIG), Ahmad AbdurRahama, appreciated President Buhari for honouring the invitation, stating that the institution was upgraded from professional training to degree-awarding in 2012.

He said the institution had graduated 1,748 cadets, Assistant Superintendent of Police, over the years, including the 205 who just graduated.