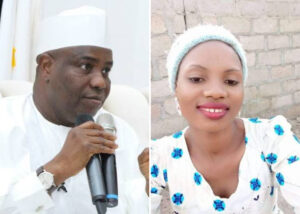 Gov. Aminu Tambuwal of Sokoto State on Monday, May 16, relaxed the 24-hour curfew imposed on Sokoto metropolis on Saturday.

The curfew will now be from dusk to dawn.

Tambuwal imposed the curfew to contain the tension that followed the murder of a 200-Level Home Economics student of Shehu Shagari College of Education in Sokoto over alleged blasphemy.

The lifting of the curfew is contained in a statement issued by the Commissioner for Information, Alhaji Isa Bajini-Galadanchi.

He stated that the relaxation of the curfew followed briefing by security agencies in the state.

The review is to enable people to go about their legitimate businesses and other means of livelihood.

The commissioner also quoted Gov. Tambuwal as advising residents to maintain peace. He also warned that government would not condone any breach of the law.

Demonstrators had damaged the Holy Family Catholic Cathedral on Bello Road and St. Kevin’s Catholic Church in Gidan Dere. Thankfully, no one was hurt or killed.

Governor Tambuwal, on the other hand, acted quickly to impose a 24-hour curfew in the city and also called off his consultations.

The governor was scheduled to go to six states as part of his ongoing presidential campaign consultations. He, however, canceled the visits to guarantee that the state’s normalcy is restored.

In a statement signed by the Catholic Diocese of Sokoto’s Director of Social Communications, Reverend Father Christopher A. Omotosho, Most Reverend Kukah praised Gov. Tambuwal for taking preemptive measures.

He also commended the security agencies for their prompt intervention in preventing the further spread of the protest.