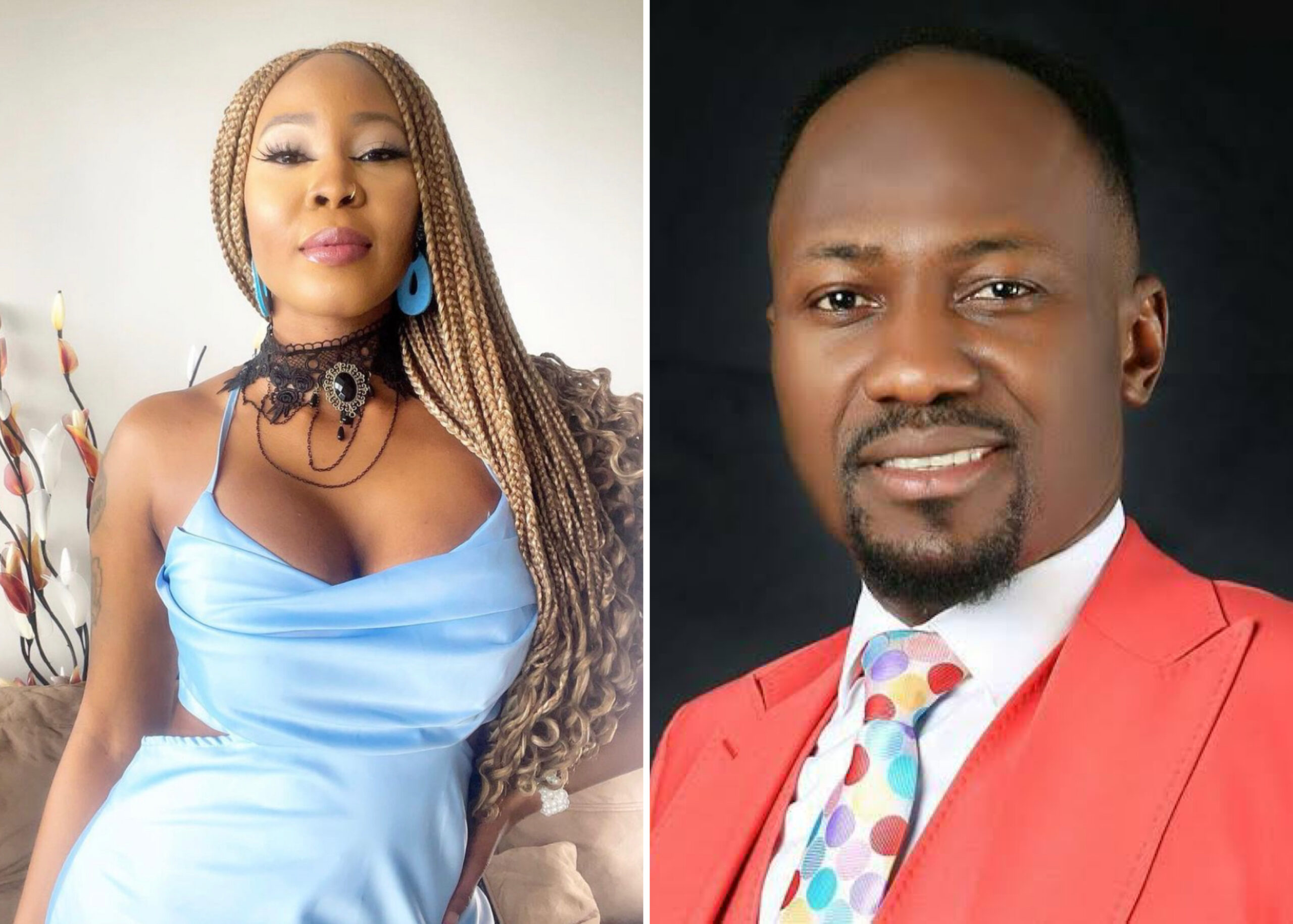 Canadian-based singer, Stephanie Otobo is back in the news, years after she called out Apostle Johnson Suleman over their alleged sexual affair.

Recall that Otobo claimed to have had a sexual relationship with Apostle Suleman back in 2017 and shared details of their alleged relationship in a video interview as well as screenshots of alleged steamy chats between the two.

The Canada-based lady later apologised for falsely accusing the man of God, saying she was paid to lie against him.

Read More: Stephanie Otobo Confesses: I Was Used And Paid Against Apostle Suleman

In front of the church congregation in Edo state, Otobo said was paid heavily by some politicians to tarnish the image of the pastor.

In a twist of event, Otobo alleged that she was forced by the Omega Fire Ministries founder to claim that politicians forced her to accuse him of sleeping with her.

Read Also: New Twist In The Stephanie And Apostle Suleman Saga As She Claims Her Earlier Confession Was Due To The Threats She Got From Him

However, the singer has now resurfaced and taken to her Twitter page on Monday, May 9, 2022, to call him out over their alleged relationship.

Stephanie accused the cleric of trying to kill her, while sharing screenshots of video calls between then and alleged photo of the popular pastor’s penis.

If these screenshots were fake, how did i get his pics that aren’t public pics at the first place and how come I’m the first to release this kind of pics of him? He has changed his hairstyle twice since i came out to speak up with receipts. He has done alot to appear different🤣 pic.twitter.com/wsDOFKQDAX

If the dick pic isn’t his, what is he gonna say about the scar oh his left thigh? His wife can’t deny that scar. How did i know he has a scar on his left thigh if we we didn’t have intimacy?Lol. If he’s denying, he should open up his thigh let’s see. His nails too says it all💅 pic.twitter.com/ghzQNuhoH2

Some people kept on wondering why i came out esposing apostle Johnson suleman, and why i haven’t let go ever since.
The truth is that, i never planned to. He pushed me to the wall and the only way i could fight back was to cry out and made everything known.
The devil smile👿 pic.twitter.com/1doprZCtkJ

Apostle Johnson Suleman tried using police to shut me up because I visited Nigeria to do feature Timaya in a song. I already paid Clarence Peters for the visuals of the song before oga arrested me, cos i refused to obey him to go back to Canada. He wanted me to amount to nothing pic.twitter.com/QzbXbTNrCT

Read Also: Pastor Mike Davids Apologises To Apostle Johnson Suleman For Accusing Him Of Committing Adultery With His Wife (Video)

He did everything to stop my music music career. He was scared that I’ll be influencial. He even poisoned me, paid my friends to set me up and bribed some members of my fam to assassinate me. Lured me to come make false confession at his church in auchi that i lied against him. pic.twitter.com/SGc12U8Tgn

That it was other pastors and politicians that wanted to bring him down. How come no name was mentioned.? I only did that cos the pressure was toomuch and everyone had left ne to suffer alone. No support. I had to give up at that moment to have the opportunity for reinforcement.

This man has done everything to end my life but God is not dead, this video is the complete story of how everything happened and how it’s going lately. I’ll release a comprehensive video of everything that happened and the answers to questions. pic.twitter.com/VTmGiFZ6Ok

Otobo and Suleman’s sex scandal first made the headlines in 2017.

The singer released a set of damaging Snapchat shots on the internet allegedly of herself and the pastor, whom, she claimed, impregnated and dumped her.

Fromm kinky sex, sexting, abortion and even an alleged planned wedding, Nigerians were left in shock as the singer share the ugly details of their relationship.

Halima Abubakar Continues To Disgrace Apostle Suleman As She…