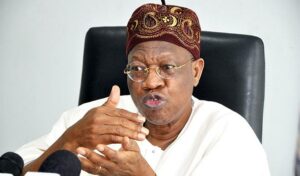 Information Minister, Lai Mohammed, has asked Facebook to do more to prevent the Indigenous People of Biafra (IPOB) from inciting violence on its site.

Lai Mohammed mentioned this at a meeting with a Facebook team in Abuja on Tuesday, May 17.

According to the Minister, IPOB’s operations have resulted in the deaths of multiple people.

I have called this meeting to enable us to discuss the increasing use of Facebook by separatists and anarchists; especially those of them based outside the country, to instigate violence and ethnic hatred in Nigeria.

For whatever reason, they seem to have now chosen Facebook as their platform of choice. And their tools include disinformation, incendiary statements and hate speech.

Lai Mohammed went on to say that the IPOB uses Facebook broadcasts to reach out to their thousands of followers, labelling those who reject their violent methods as “saboteurs” who must be attacked, maimed, and killed.

Our social media people have been monitoring these separatists, anarchists and purveyors of hate, and have been reporting their atrocious actions to Facebook, but all they get are default responses that their complaints have been received and are being looked into.

Most often than not, nothing is done about such complaints. The truth is that whatever Facebook is doing to check these people is mere tokenism and is totally ineffective.

Indigenous People of Biafra (IPOB) is a separatist organization in Nigeria. Its main aim is to restore an independent state of Biafra in the Old Eastern Region of Nigeria. It comprises mainly today’s South-East and South-South Regions of Nigeria; and also parts of the Middle Belt states of Nigeria such as Benue State and Kogi State, through an independence referendum.

The group was founded in 2012 by Nnamdi Kanu, a British Nigerian political activist known for his prominent advocacy of the contemporary Biafran independence movement.

It was deemed a terrorist organization in 2017 under Nigerian Terrorism Act.

IPOB Challenges DSS To Produce Supporters In Court If They…