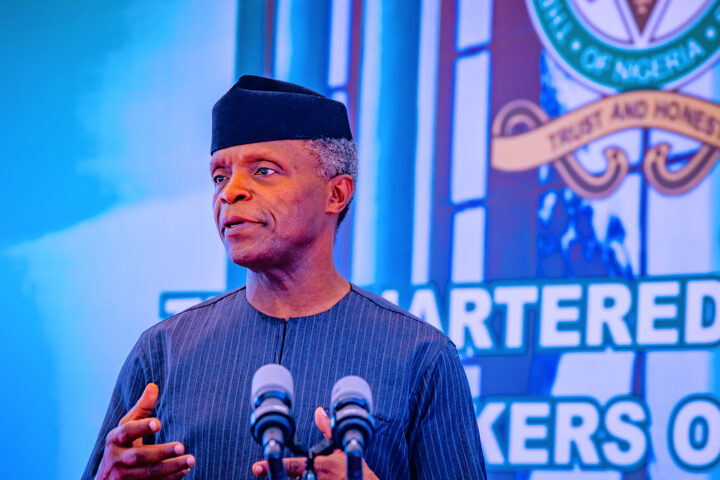 Head of Politics and Governance of RCCG, Pastor Timothy Olaniyan has said Vice President, Yemi Osinbajo is a child of God and he is capable of changing the narrative of governance in Nigeria.

According to Vanguard, Olaniyan stated this at the weekend while fielding questions from newsmen at the inaugural conference of New Era Nigeria (NEN), a political movement set to change the narrative of governance in 2023.

Olaniyan, who had previously denied mobilising support for the vice president’s ambition, said Osinbajo, being a “child of God,” remained the only aspirant capable of changing the governance narrative in Nigeria.

People will promise heaven and earth, and at the end of the day, you see them giving N1000, N2000 to eligible voters. After the election, you won’t see any of their promises being fulfilled, and the people they gave money will not have access to these notable politicians. It is high time our eyes were opened. What we want is not those baits, we want somebody that would make a promise to our children and fulfill it.

If you tell me education is going to be free, I want you to get there and make it free so that we
would not continue to build up youths who have no future.

As of today, Pastor Yemi Osinbajo is not just a pastor, he is still a child of God. There are many pastors who can decide to do rituals with a human skull and still claim to be a pastor. I am talking of a
child of God.

Recall that in March, RCCG created the department to mobilise support for members of the mission seeking elective office, a move that further blurred the thin line between religious prejudices and the state in Nigeria.

The church also directed its branches to appoint a provincial officer across its levels for this new department.

Weeks after the department’s creation, general overseer of the church, Enoch Adeboye, said he was politically neutral and would not mobilise support for any political party because they are all his “sons.”

Juliet Ibrahim Recounts How Ex-Boyfriend Locked Her Up, Raped Her Daily (Video)

E.A. Adeboye Discloses Why No One Died Of Covid-19 In His…

No Memo Was Signed Over My Resignation From APC — VP…