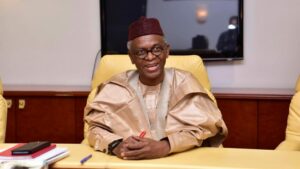 Kaduna State Governor Nasir El-Rufai has expressed gratitude to religious, traditional, and community leaders, as well as security services, for their earnest and zealous pursuit of peace initiatives.

El-Rufai stated this in a statement on Tuesday, May 17, issued by Mr Samuel Aruwan, the State Commissioner for Internal Security and Home Affairs.

Following a review of the security situation in light of recent concerns over events in other Northern states, Aruwan praised key stakeholders for maintaining peace in the state.

Governor El-Rufai noted with satisfaction the dedication of these critical stakeholders to the cause of peace and security in the state.

The government appeals to parents to admonish their children and wards on the need for proper conduct, and to avoid actions that could be seized upon by mischief makers to create tension.

The government appeals to the citizenry, in the interest of security and peace, to uphold respect for the religious and cultural affiliations of all, and eschew denigration in all its forms.

Aruwan said that the Kaduna State government had reiterated that recourse to the law remained the only acceptable means of redress, and never self-help.

The government of Kaduna State and security agencies will continue to monitor the situation closely and work towards curbing the activities of recalcitrant forces attempting to cause breakdown of law and order in the state.

He said the security agencies would not hesitate to take action on anyone, regardless of status, playing a role in an attempt to cause unrest.

Google Searches Reveal How Anxiety Increases Due To Global…