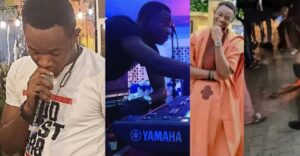 Lagos State Government has condemned the May 12 mob attack by commercial motorcycle riders on a sound engineer, Mr David Imoh, who was killed in Lekki, assuring that justice will be done.

The state’s task force on environmental offences arrested 10 commercial motorcyclists and impounded 123 motorcycles operating at Lekki area on Monday, May 16, as a consequence of the murder.

The police had earlier arrested four persons over their alleged participation in the murder of David Imoh, 38, and promised to continue the manhunt.

Commissioner for Information and Strategy, Mr Gbenga Omotoso, stated this on Monday. He noted that he had spoken with Imoh’s family members and that two survivors of the condemnable act were in still hospital.

He extended the condolences of Gov. Babajide Sanwo-Olu; and assured that government would address the root cause of the mob attack and similar incidents, which had caused public anxiety.

Government implores residents to remain calm as police continue to investigate the matter.

Lagos has no room for savagery. Anybody found to have been involved in the barbarism will surely face the law.

We condemn and will not condone any kind of jungle justice no matter who the perpetrators are.

#JusticeForDave was one of the most popular hashtags on Twitter on Sunday; as many demanded an investigation into the homicide and justice.

A crowd lynched David Imoh, according to multiple stories and footage on social media. The incident occurred in the state’s Oniru region.

According to reports, David Imoh got into a heated argument with Okada, a commercial motorcycle rider. This sparked a brawl, which escalated when other Okada riders jumped on David and his companions.

They thrashed them until they were unconscious, then burned David. His friends, on the other hand, are receiving treatment in a hospital.

Lagos Government To Crush 250 Power And Dispatch Bikes By…