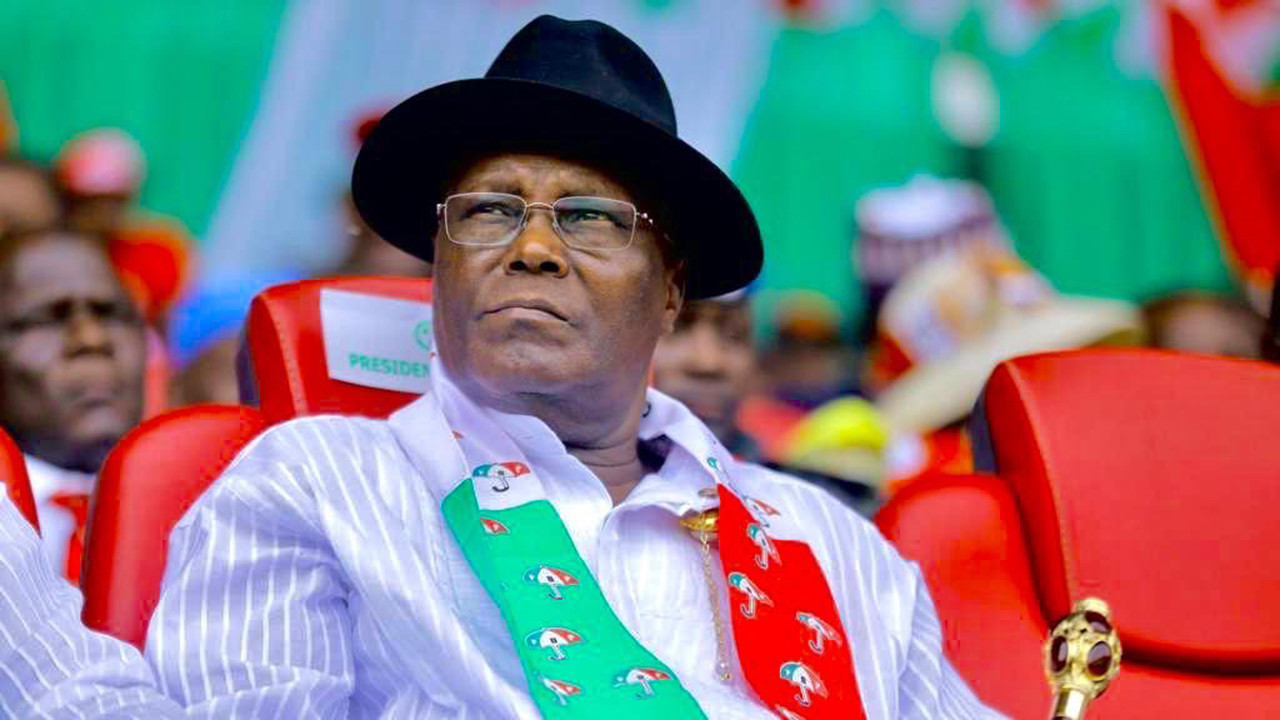 Presidential hopeful, Atiku Abubakar, has deleted posts he shared on his Facebook and Twitter pages condemning the brutal killing of Christian student, Deboral Samuel, by a mob in Sokoto state over alleged blasphemy.

Samuel, who was a 200-level student of Shehu Shagari College of Education in Sokoto, was stoned to death and set ablaze in the school premises for allegedly making unflattering comments about Prophet Muhammad.

A gory image and video clips of the incident on Thursday, May 12, caused stirs on social media as Nigerians took sides based on religious beliefs and personal convictions.

Amid the outrage against the killing, Atiku, who is a Muslim running for President on the platform of the Peoples Democratic Party, also took to his social media pages to condemn the action.

There cannot be a justification for such gruesome murder. Deborah Yakubu was murdered and all those behind her death must be brought to justice. My condolences to her family and friends. 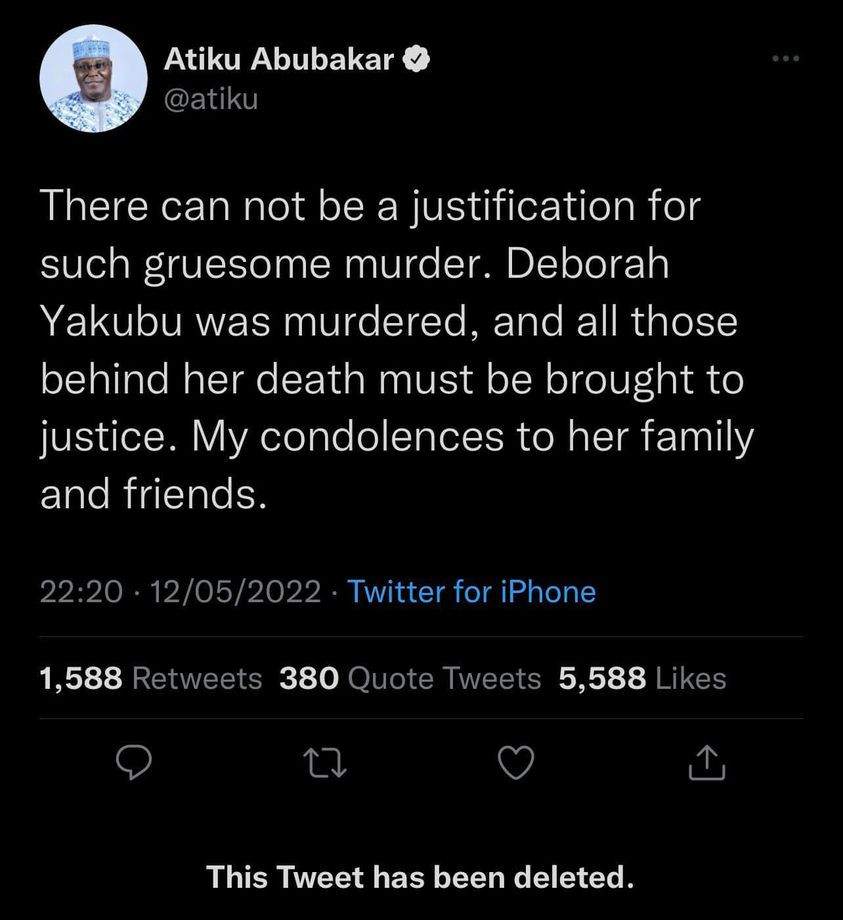 However, the former Vice-President came under threats from some Muslim northerners on both platforms, who threatened not to vote for him if he emerges as the Presidential candidate of the PDP.

The politician who shared the posts around 10:20 p.m. on Thursday May 12, deleted them less than an hour later after.

Some of the critics of the former VP’s position on the matter called him unprintable names for not supporting the punishment for blasphemy as preached by Islam; a religion he identifies with. 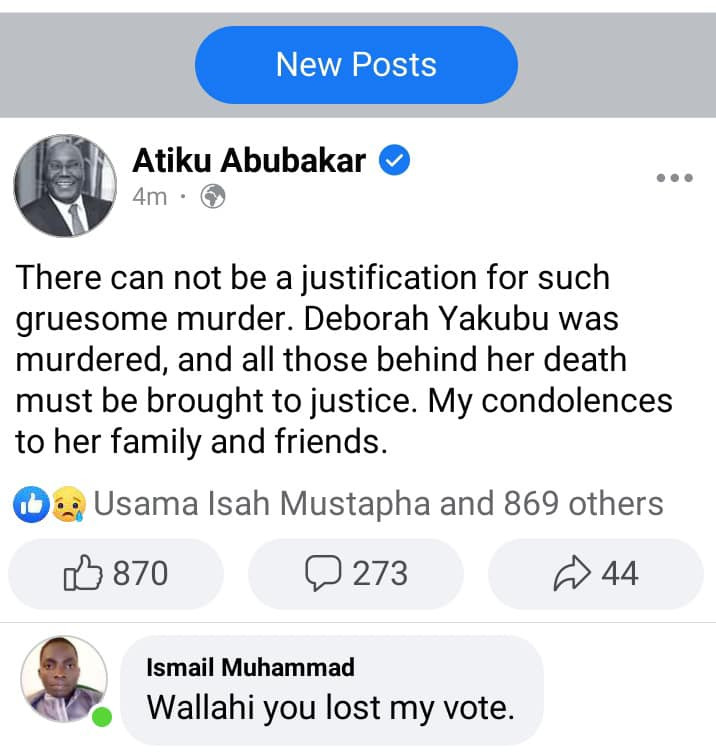 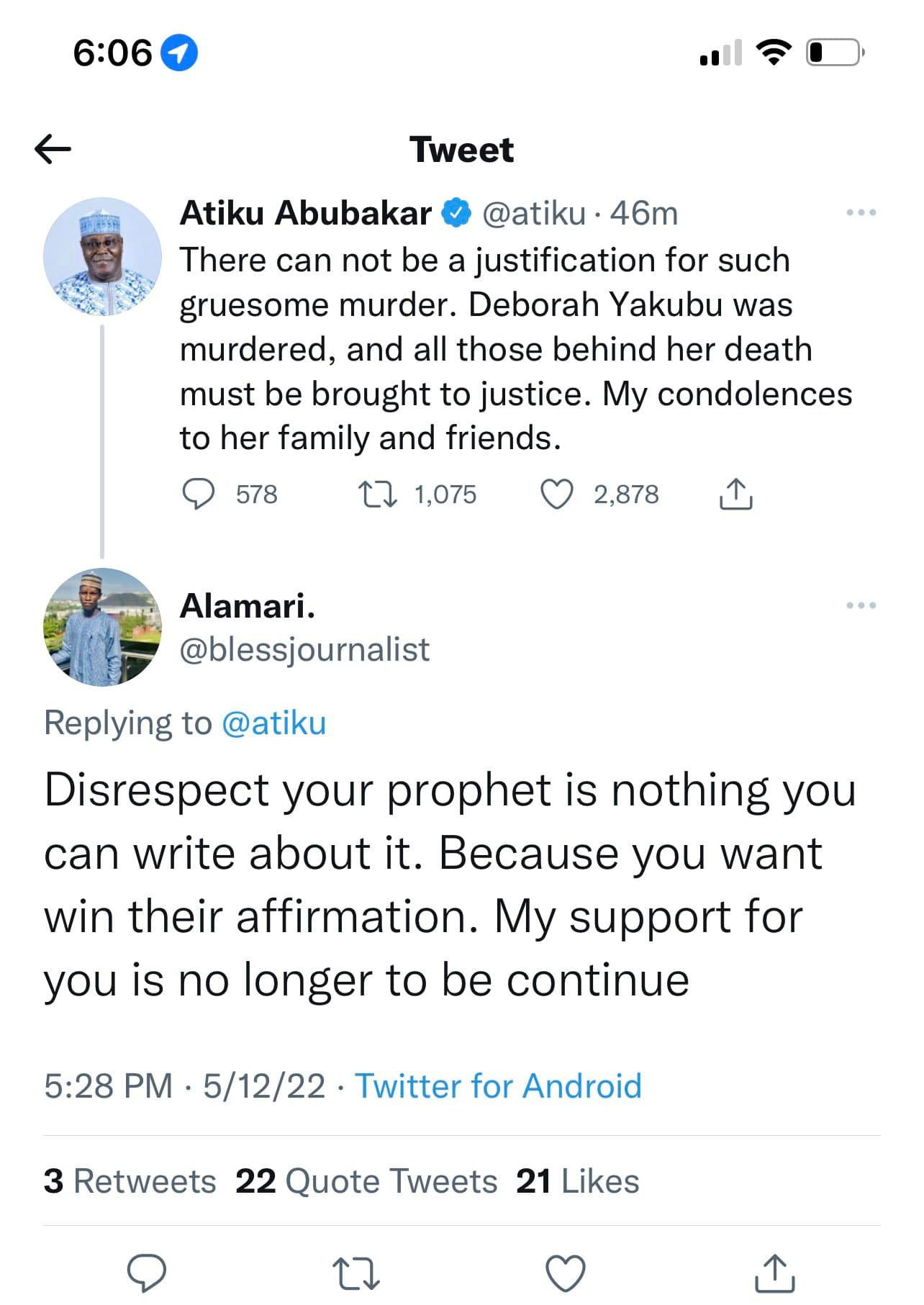 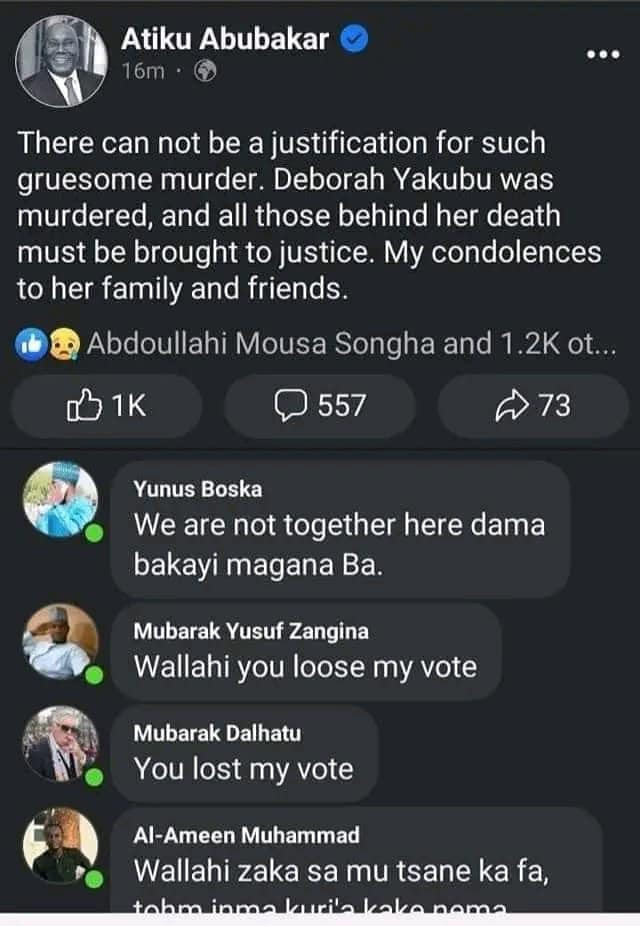 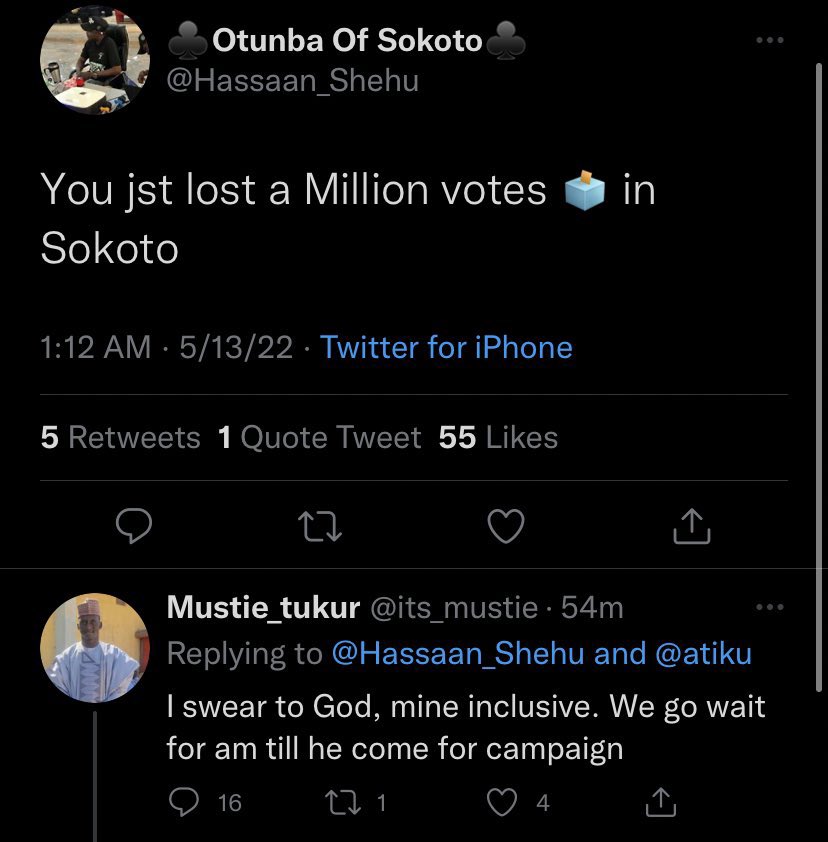 In his reaction, Atiku later deleted the tweet amid the threats.

Also on Facebook, the former Vice President in a message on his verified Hausa page distanced himself from the message.

He stated that any message on social media that did not come with the initials “A. A.” were not his.

This evening I received information that a post was made that doesn’t agree with my orders. I use this to announce that any post without A. A. is not from me. May God protect us.

The former vice president’s actions have since earned him the derision of most Nigerians, who accused him of always chickening out when the going gets tough, an action they termed ‘unpresidential’.

Atiku deleting the tweet condemning the gruesome murder of Deborah shows what we have been preaching this whole election season.
Politicians don’t care for the people. They only play to the gallery when seeking for our votes. The people must see beyond these gimmicks…

Atiku was not really sympathetic

Tried to appease the South, saw reaction from the North, deleted

Our Politicians are the wickedest people on earth

Atiku deleting the post he made to condemn the sokoto killing is a big red flag.

Incumbent President GEJ said his ambition is not worth the blood of any Nigerian and submitted to the will of the people without bloodshed.

Aspirant Atiku deleted his own tweet condemning religious mob who killed an innocent lady because they threatened him with votes in Sokoto.

Atiku made the first post in English, condemning the barbarism. Then he went to deny it in Hausa, on his Hausa Facebook Page. For him to have denied making that post, he threw the South under the bus. It means the South is of less electoral value to him. We get that loud & clear

The handler of that Atiku’s account posted that first tweet condemning the murder. I am guessing Atiku himself got wind of it and asked that it be deleted. Most likely not the end of the saga. Waiting for further reaction from him. But this is already a huge embarrassment.

Such a good tweet from Atiku Abubakar condemning the brutal murder of Deborah Yakubu. It’s really embarrassing it was deleted, especially after his silence about the Pantami saga.

You only wield power on politicians if you can make them lose their seats.

Atiku as a case study.

Atiku deleting that post condemning Deborah’s murder is yet another proof politicians rarely mean what they say; they only say what they think the people want to hear.

They’ve mastered the art of gallery play & will back down at the slightest threat to their political ambitions.

There you have it. It’s glaring, Atiku will only be a President of the North. The action of deleting that his tweet shows he supports killing for blasphemy too. He’s one of them. Never fit to rule Nigeria. All the best to whoever is going to vote for him.