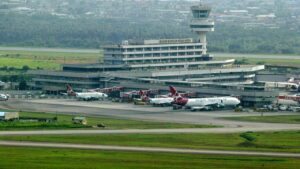 Airline Operators of Nigeria (AON) on Monday, May 16, in Ikeja expressed worries over scarcity of aviation fuel.

This, they said would worsen flight cancelations and delays in domestic operations.

The Airline Operators of Nigeria (AON) wish to alert the public of impending disruptions to scheduled flight operations by members of the association.

This development is being forced on members by the growing scarcity of aviation fuel.

The scarcity is impacting negatively on the conduct of air transport operations and would lead to flight rescheduling or cancellations.

He assured, however, that the airline operators were working very hard with fuel marketers, government, and relevant stakeholders to ensure the availability and proper pricing of aviation fuel.

Okonkwo pleaded with the flying public for understanding and promised that the association would take all necessary steps to restore normal flight schedules as soon as possible.

Weeks ago, Airline Operators of Nigeria announced the suspension of plans to shut down flight operations across the country.

In a statement, the association said the decision was taken after “numerous calls from the highest echelons in government”.

AON said the federal government promised urgent intervention, adding that the suspension of the operation shutdown would be followed by a “fresh round of dialogue”.

The body clarified that their decision followed intervention by the government with promises to dialogue with operators in seeking lasting solutions to the astronomic rise in the price of aviation fuel.

The operators’ position was contained in a statement on Sunday jointly signed by its President, Abdulmunaf Yunusa Sarina, and other members.