The cleric was initially suspended by the steering committee for criticizing the federal government’s handling of security issues in the country during the Jummat service on Friday.

He criticised the government for its inadequacy in dealing with rising insecurity in the country, referring to the Abuja-Kaduna train bomb attack.

In his sermon, the cleric asked citizens not to vote for any politician who cannot guarantee the safety of lives and properties of Nigerians.

The condition of the Nigerian masses is one. Stop killing us. We will not go to the polls, since you have nothing to do but vote.

Consequently, Khalid was suspended from his position.

Reacting to his suspension, the Sheikh said he was unperturbed, vowing to continue speaking the truth as only God can give or take power from anyone.

God is the most powerful. He gives (enthrones) and takes away power (dethrones) from whomever He wishes.

In a letter dated Monday, April 4, 2022, and titled: ‘Disengagement from the services of National Assembly Mosque‘, chairman of the committee, Senator Sa’idu Dansadau said that the decision to sack Khalid was occassioned by the “non-remorseful attitude he exhibited following his suspension on 2nd of April“.

Unfortunately, your media reaction to the suspension creates the impression that you are not remorseful, NOT to tlak of humbly reflecting on the consequences of your utterances. Leadership demands a great sense of responsibility. If our words do more harm than goos to larger interest of the country or the public. We have a responsibility to maximum restraint for the good of the public. It is obvious however, that you don’t seem keen to modify your Friday sermon to be reflective of the votality of security situation in the country.

You are an influencer; your words carry a lot of weight, your words can make or mar our situation. Your words can be taken advantage of by mischief makers, those responsible for these security challenges or enemies of the country for their devilish agendas. As leaders of the mosque we have a sacred responsibility to avoid utterances that are capable of making a bad situation worse. This is our fear and concern.

We regret to inform you that from today the 4th day of April 2023 you have been disengaged from the services of the above-mentioned mosque. This action is occasioned by the non-remorseful attitude you exhibited following your suspension on 2nd April this year. 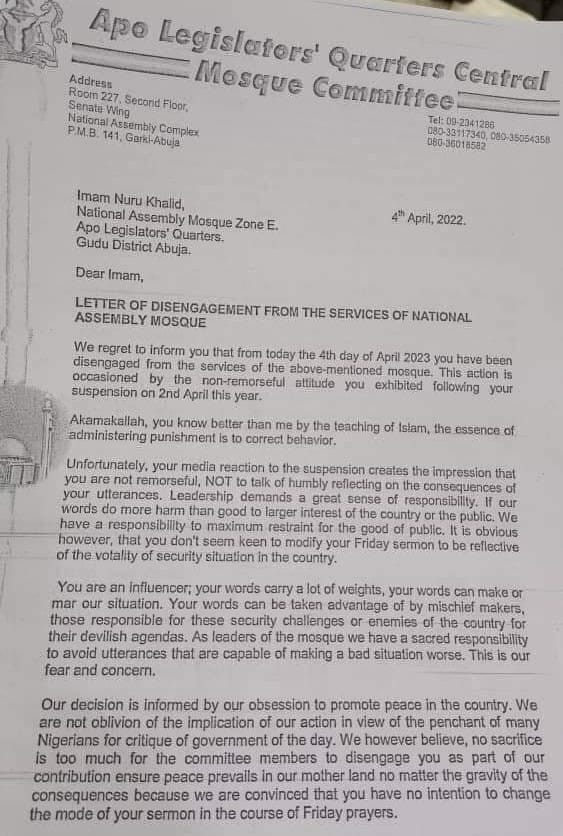