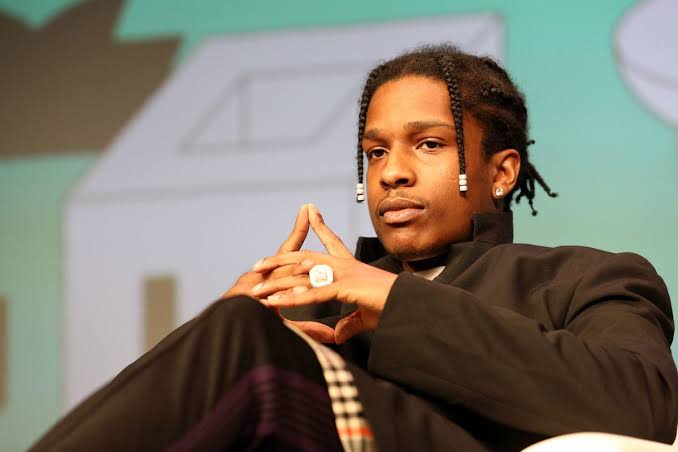 American rapper, Rakim Mayers, better known as A$AP Rocky has been released from jail after being arrested at Los Angeles International Airport, according to Los Angeles Police Department.

He was booked and released on a felony charge of assault with a deadly weapon (firearm), stemming from an alleged incident that took place in November 2021.

The 33-year-old rapper had just returned from a vacation in Barbados with his pregnant girlfriend, Rihanna, when he was arrested at Los Angeles International Airport at 8:20 a.m. Wednesday morning.

In a statement on Twitter, police on Wednesday gave details of the November incident and said;

Early this morning (Wednesday), LAPD officers arrested Mayers for assault with a deadly weapon (firearm) at the Los Angeles International Airport. The case will be presented to the Los Angeles County District Attorney’s Office for filing consideration.

Afterwards, he was interviewed at LAPD Robbery Homicide Division before being booked at the Metropolitan Detention Center. Rocky was released at 3:27p.m. after posting $550,000 bail.

A court date for Rocky has been set for August 17 at the LAX Superior Courthouse, with the L.A. District Attorney’s Office telling ET that, “A case has been presented and is under review.”

Police say that on November 6, 2021, “an argument between two acquaintances occurred” in the Hollywood area.

The argument escalated and resulted in the suspect firing a handgun at the victim. The victim sustained a minor injury from the incident and later sought medical treatment. Following the shooting, the suspect and two additional males fled the area on foot.

Shortly after Rocky’s arrest, the LAPD executed a search warrant on the rapper’s Los Angeles-area home, where a source tells ET that about “6-7 LAPD vehicles were seen blocking traffic from entering or exiting” Rocky’s residential street.

There were about 6-7 LAPD vehicles throughout A$AP Rocky’s residential street, including two parked on either end, blocking traffic from entering or exiting. No one other than police and a few paparazzi were on the street during the aftermath of the police search warrant.

A black Cadillac Escalade was parked in front of the home, blocking the gated driveway. At one point, a blue convertible arrived at the residence and was quickly ushered into the driveway, with another vehicle following behind to block the gate. During this time, a male who seemed to be a friend of A$AP’s, was replaced by a bodyguard to guard the front door. Once the police left, it was quiet outside of the residence, short of a few remaining paparazzi.

After his release, HollywoodLife spoke EXCLUSIVELY to LA-based criminal attorney Lara Yeretsian, who said that, if convicted, he could face up to 14 years in jail for this felony charge.

Attorney Yeretsian, who has not worked with A$AP, said in the interview that he will have to head back to LA in just a few short weeks to face the charges and that he could be locked away for some time, missing the beginning of his unborn baby’s life.

While the arrest comes as a surprise for the pair, this is not Rocky’s first run-in with the law.

In the summer of 2019, Rocky, along with two members of his entourage, were arrested in Sweden, after being involved in an altercation with two unknown men the previous month.

Rocky was eventually released after spending time in a Swedish jail in August 2019 and traveled back to the United States. The same month, the rapper was found guilty, but did not face any jail time.

Tems To Work With Rihanna On Black Panther Soundtrack