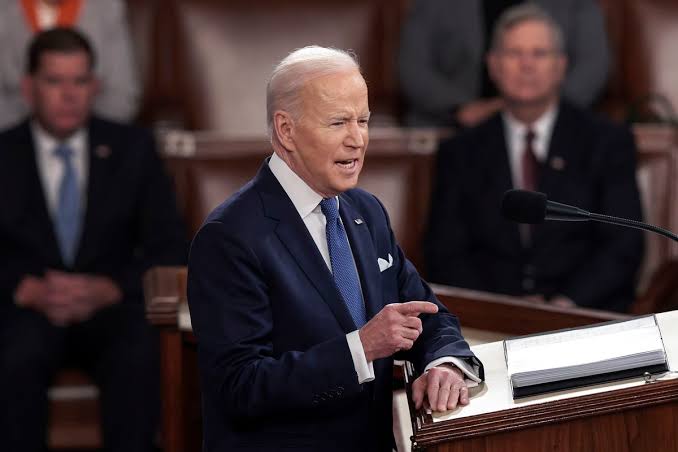 US President, Joe Biden has on Tuesday banned imports of Russian oil to punish Moscow for its invasion of Ukraine as desperate civilians fled besieged cities and fresh fighting raged.

Britain said it would also phase out Russian oil by the end of the year and the EU planned to slash gas imports by two-thirds, as Western sanctions finally began to target the economic lifeline for Russia’s war.

Russian President Vladimir Putin has pressed on despite unprecedented sanctions, although Moscow agreed set up “humanitarian corridors” from four Ukrainian cities on the 13th day of the conflict.

Buses streamed out through an evacuation corridor from the northeastern city of Sumy — where 21 people were killed in air strikes overnight — while civilians on foot took an unofficial escape route out of the bombarded Kyiv suburb of Irpin.

However, Ukraine accused Russia of attacking a corridor from the beleaguered southern port city of Mariupol, where aid workers said tens of thousands were living in “apocalyptic” conditions.

Kyiv has branded the corridors a publicity stunt as many of the exit routes lead into Russia or its ally Belarus. Both sides accuse each other of ceasefire violations.

Biden said Ukraine would “never be a victory” for Putin, as he announced the measures targeting the energy sector that props up the Russian economy and its war effort.

Russian troops are slowly encroaching on Kyiv despite intense efforts by outgunned Ukrainian forces, and moving faster through the east and north of the country.

Despite the sound of nearby shelling in Irpin, seen as a critical point for the advance on the capital, civilians fled in icy wind and thick snowfall, AFP reporters saw.

People waited in a long line to cross over the Irpin river on makeshift walkways of planks and mangled metal, after the Ukrainians blew up the bridge leading into the capital to hamper any Russian advance.

Russia had refused calls for a humanitarian corridor in Irpin and the nearby suburbs of Bucha and Gostomel “although we had everything ready for this”, Ukrainian interior ministry official, Anton Gerashchenko said.

Evacuations had however begun in Sumy, near the Russian border and 350 kilometres (218 miles) east of Kyiv, where Russia had formally declared a humanitarian corridor, officials said.

Dozens of buses had already left in the direction of Lokhvytsia, to the southwest, with the corridor designed to evacuate civilians, including Chinese, Indians and other foreigners, officials said.

The evacuation came after 21 people, including two children, were killed in Sumy overnight. Three people were killed and three children wounded by a landmine in Chernigiv, north of Kyiv, officials said.

Ukraine’s defence ministry also accused Russia on Tuesday of violating a ceasefire to ease a days-long blockade of Mariupol, describing it as “genocide”.

A six-year-old girl identified only as Tanya died from dehydration under the rubble of her destroyed home in Mariupol, the city council said.

“In the last minutes of her life she was alone, exhausted, frightened and terribly thirsty,” Mayor Vadym Boychenko said.

Meanwhile, Ukrainian President Volodymyr Zelensky denounced what he called unkept promises by the West to protect his country, and renewed calls for a no-fly zone that leaders have so far dismissed.

Global outrage mounted over the invasion and the plight of civilians caught up in the bloodshed.

International Committee of the Red Cross said Mariupol residents faced “atrocious” conditions and were running out of food, water and medical supplies.

“The bottom line today is that this situation is really apocalyptic for people,” ICRC head of media Ewan Watson said in Geneva.

At least 474 civilians have been killed since the start of Russia’s assault on its ex-Soviet neighbour, according to the UN, although it believes the real figures to be “considerably higher”.

The onslaught has created a huge refugee crisis for European countries that have taken in Ukrainians fleeing the conflict, particularly Poland.

Russia has warned that oil sanctions would have “catastrophic consequences”.

However, the United States has led the push for energy sanctions — partly because Russia accounts for less than 10 percent of US imports of oil and petroleum products, which means the impact on the world’s largest economy would be easier to bear.

Biden said the ban had been decided “in close consultation” with allies, especially those in Europe, who depend on Russia for 40 percent of their gas needs.

European Commission expressed that it wanted to cut Russian gas imports by two-thirds, while Britain said it would phase out oil imports in line with the United States.

The pressure has grown on businesses and sports to also sever ties with Moscow.

The Premier League announced it would suspend its deal with its Russian broadcast partner, while oil giant Shell said it would withdraw from Russian oil and gas immediately.

However, the West has so far steered clear of the no-fly zone demanded by Zelensky, with Putin warning it would be considered as “participation in the conflict” with nuclear-armed Russia.

Putin has equated sanctions with a declaration of war and put nuclear forces on alert. He has pledged the “denazification” of Ukraine and demands its “neutralisation” and demilitarisation.

At home, Russia has cracked down on dissent, arresting more than 10,000 people for anti-war protests and clamping down on independent media.