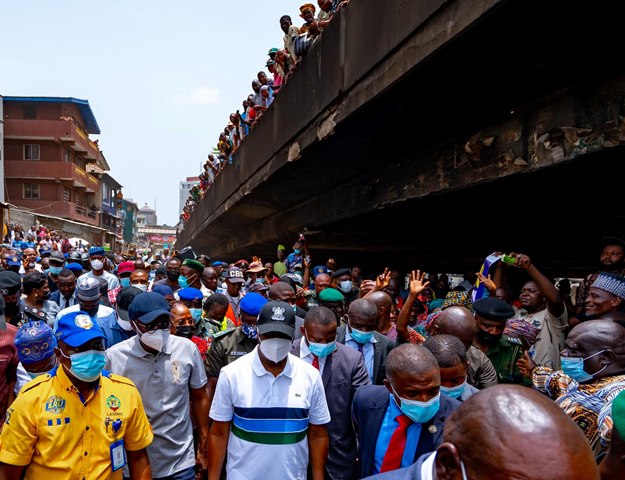 Lagos State Governor, Mr Babajide Sanwo-Olu, has on Monday insisted that no going back on the seven-day ultimatum issued by the state government to traders under bridges across the state to vacate those places.

Sanwo-Olu reiterated the state government’s decision to the traders under bridges during an on-the-spot assessment of the Apongbon Section of Eko Bridge in Lagos Island, which was gutted by fire last week Wednesday.

Following the fire incident, the government indefinitely suspended vehicular movement on the affected part of the bridge to allow for safety test and integrity examination on the facility.

Five market groups used the open space under the bridge at the Oke Arin section of the Eko bridge for commercial activities.

On sighting Sanwo-Olu at the site, a crowd of traders affected by the fire incident gathered and made passionate appeal to the Governor not to shut the market.

However, their plea met a stiff resistance from Sanwo-Olu, who insisted that the traders’ unsafe practices led to the situation that caused the fire outbreak, which wreaked havoc on the busy bridge.

The governor bemoaned persistent destruction on vital public infrastructure within the State, disclosing that Lagos had recorded major damage on eight bridges across the State in the last two years.

The development, Sanwo-Olu said, usually takes a toll on socio-economic activities and slows down productivity.

We have issued a seven-day notice to all illegal occupiers under the bridge. We have gone to see the extent of the destruction in the bridge; it is an unfortunate incident and the situation that caused the fire was a clear indication of how public assets should not be used. I want to reiterate that our ultimatum is still on and Wednesday is the deadline. Anybody that has anything valuable to him must remove it now, because we are starting extensive clearing of the site.

Between last two years and now, we have had eight fire incidents on our bridges. Each time something like this happens, it affects everyone of us and the economy. The implication is far reaching and this will not be accepted as a norm.

Sanwo-Olu said the State and the Federal Government would be conducting a joint investigation on the affected parts of the bridge to ascertain the level of rehabilitation work required to put it back in shape.

He expressed that the reopening of the closed section of the bridge may not happen until after structural engineers completed their investigation and certified it for use.

The Governor said the Government’s main focus in the interim was to bring normalcy back to vehicular movement along the routes and ease the pain commuters are going through in the axis.

Sanwo-Olu directed removal of vehicles parked on the elevating ramp at Ebute Ero towards Constain and ordered the presence of police and traffic officers to manage movement around alternative routes in and out of Marina.

Addressing the traders, the Governor told them that commercial activities would be restricted under the bridge, pointing out that plans were being made to relocate the traders to places where they would safely conduct their businesses.

Aside from slowing down traffic, Sanwo-Olu said activities under the bridge raised security concerns for the traders and commuters.

The Governor and members of the State’s cabinet also visited Obalende Bridge for evaluation of the safety of the infrastructure.