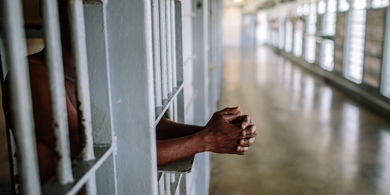 An Ekiti State High Court, sitting in Ado Ekiti has sentenced one Ayokunle Eric Henry to life imprisonment for the offence of rape.

The convict was arraigned on one count charge of rape which reads;

Ayokunle Eric Henry (25), on 25th day of December 2019 at the bush between Ilawe and Igbara-odo Ekiti within the jurisdiction of this honourable court did rape a seventeen (17) year old girl.

In her statement to the Police, the victim said, she was going to Ilawe Ekiti from Igbara-Odo Ekiti to deliver food to her mother and her brother’s wife, who just put to bed, being a Christmas day, she chattered an Okada man with an agreement of paying a sum of N500 to and fro, before they left for Ilawe, the Okadaman ate pepper soup and drank beer in a joint, he also bought fish and soft drink for her.

Thereafter, they left for Ilawe Ekiti, on their way back, he entered a bush path between Ilawe and Igbara-odo, when I asked him why? He said, he was avoiding a Police checkpoint on the road, I became uncomfortable and started shouting but nobody came to my rescue, I jumped down from the motorcycle, he held my hand and forcefully removed my skirt and pant and raped me despite being on my monthly menstruation, I have never had sex with anybody prior to that time. He was arrested by a Pastor after the act and handed over to the Police Patrol Team on the road.

To prove his case, the prosecutor, Kunle Adeyemo Esq called three witnesses including a Medical Doctor and the Investigating Police Officer and tendered a medical report, photographs among others as exhibits while the convict spoke through his counsel Kolade Kolapo Esq and called no witnesses.

In his Judgment, Justice Adekunle Adeleye said, the convict did not raise any defence, save for the fact that he made an endeavour to establish a relationship of boyfriend and girlfriend with the victim.

In the final analysis, the prosecution has established the essential ingredients of the offence of rape against the defendant beyond a reasonable doubt.

The defendant is found guilty as charged and he is sentenced to life imprisonment as provided for under provisions of the Child’s Right Law, Cap C7, Laws of Ekiti State.