White House has on Friday said a Russian invasion into Ukraine could come within the week, possibly within the next two days, and urged Americans to leave the country in 24-48 hours.

National security adviser, Jake Sullivan said the U.S. still did not know if Russian President, Vladimir Putin had made a decision to invade, but that all the elements are now in place for a rapid incursion.

Sullivan also noted that an invasion could be launched before the conclusion of the 2020 Beijing Winter Olympics, which are set to end on February 20.

Read Also: US Believes Putin Could Invade Ukraine Within Days

If US civilians don’t leave and Russia invades Ukraine, the White House declared that the country won’t be able to rescue any remaining American civilians.

Biden issued the stark warning to his citizens on Friday, urging them to leave Ukraine as soon as possible.

“American citizens should leave, should leave now,” Biden told NBC News. “We’re dealing with one of the largest armies in the world.”

He added that “things could go crazy quickly.”

US State Department issued a similar warning on Thursday, saying that the U.S. “will not be able to evacuate U.S. citizens in the event of Russian military action anywhere in Ukraine.”

The order comes amid buzz that tensions at Russia-Ukraine border could soon reach their breaking point after concerns of a Russian invasion have been mounting for months.

Britain’s defense secretary, Ben Wallace visited Moscow on Friday in another effort to ease tensions over a possible invasion of Ukraine by Russia, which held massive war games near its neighbor and insisted that the standoff with the West wasn’t “our fault.”

Ben Wallace’s trip came a day after British Foreign Secretary Liz Truss held negotiations in Moscow to urge Russia to pull back over 100,000 troops near Ukraine.

However, the meeting has been described as a “conversation between deaf and dumb.”

Russia says it has no plans to invade but wants the West to keep Ukraine and other former Soviet countries out of North Atlantic Treaty Organization (NATO).

It also wants NATO to refrain from deploying weapons there and to roll back alliance forces from Eastern Europe – demands flatly rejected by the West.

Speaking at the start of his talks with Wallace, Russian Defense Minister, Sergei Shoigu noted that “the military-political situation in Europe is growing increasingly tense, and it’s not our fault.”

He noted that shipments of weapons to Ukraine by the U.S., Britain and other allies have contributed to the tensions and pointed to the recent deployment of British soldiers to Ukraine, asking why they were sent and how long they will stay.

Speaking to reporters after the talks, Wallace noted that the anti-tank missiles that Britain sent to Ukraine were defensive tactical weapons that do not pose a threat to any neighbor unless it invades.

He said British troops deployed to Ukraine to help train its military to use the British weapons and will leave “pretty soon” after they accomplish that mission.

Wallace described the talks as “constructive and frank” and noted his Russian counterpart’s assurances that Moscow has no intention to attack Ukraine.

However, he also emphasized that the concentration of Russian troops near Ukrainian territory is clearly “beyond normal exercising,” explaining that about half of Russia’s land forces are concentrated around the border with Ukraine.

Wallace reaffirmed that a Russian invasion would have “tragic consequences” and emphasized the need to maintain contacts between military forces to prevent incidents.

Continuing its military buildup near Ukraine, Russia has moved six amphibious assault vessels into the Black Sea, augmenting its capability to land marines on the coast. 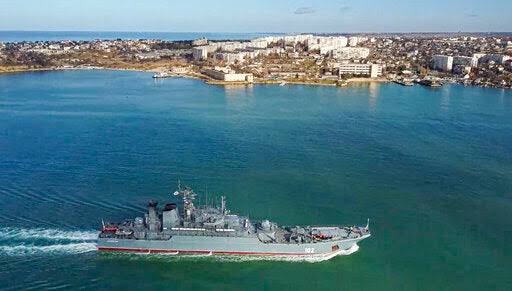 Moscow has announced sweeping drills in the Black and Azov seas in the coming days and closed large areas for commercial shipping, drawing a strong protest from Ukraine on Thursday.

Russia has more than 150,000 combat troops massed at the Ukraine border, along with the country’s “most advanced weapons” and all the necessary logistics.

Meanwhile, Ukraine’s military chief, Valerii Zaluzhnyi, reported to President Volodymyr Zelenskyy on Friday that the authorities plan to quickly engage 1.5 million to 2 million people in training for the army reserve.

Russia and Ukraine have been locked in a bitter conflict since 2014, when Ukraine’s Russia-friendly leader was driven from office by a popular uprising.

Russia responded by annexing Ukraine’s Crimean Peninsula and throwing its weight behind a separatist rebellion that broke out in Ukraine’s east.

Ukraine and the West accused Russia of sending its troops and weapons to back the rebels. Moscow denied that, saying the Russians who joined the separatists were volunteers.

According to Kyiv, more than 14,000 people have died in the fighting that devastated Donbas, Ukraine’s eastern industrial heartland.

On its part, Moscow has strongly criticised the US and its NATO allies for providing Ukraine with weapons and holding joint drills, saying that such moves encourage Ukrainian to try to regain the rebel-held areas by force.

Furthermore, Russian President Vladimir Putin has repeatedly said Ukraine’s aspirations to join NATO are a red line, and expressed concern about plans by some NATO members to set up military training centres in Ukraine. This, he has said, would give them a military foothold in the region even without Ukraine joining NATO.

A 2015 peace deal brokered by France and Germany helped halt large-scale battles, but regular issues have continued, and efforts to reach a political settlement have stalled.

Several rounds of diplomacy have failed to ease tensions on Europe’s doorstep that some describe as the continent’s worst crisis since the end of the Cold War.

Western leaders have for months raised the alarm over a possible invasion of Ukraine as tens of thousands of Russian troops mass along the border. However, Russia has denied any plan to invade.

It says it is seeking written guarantees from NATO that the alliance will withdraw its presence from eastern Europe and never expand into Ukraine.

The United States and its European allies have rejected those demands.

US Believes Putin Could Invade Ukraine Within Days

Prince Harry: ‘I Sacrificed Everything For Meghan Markle’