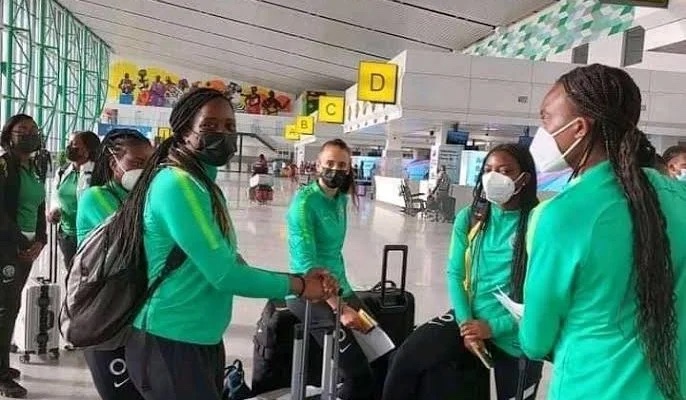 Players and officials of Super Falcons have poured out their grievances after they were delayed for hours at Nnamdi Azikwe International Airport, Abuja upon their return from 2022 African Women’s Cup of Nations (AWCON) qualifier in Abidjan.

They were held back by officials of National Centre For Disease control over COVID-19 protocols.

In now-viral videos, the players and officials appeared to be stuck at the airport in the early hours of Thursday, while some of the team members registered their grievances.

The incident was not the expected welcome for the Super Falcons who arrived from Cote D’Ivoire, where they secured the country’s participation at the 2022 AWCON.

The Nigerians had bested their West Africans 3-0 on aggregate to earn a chance to defend their continental crown in Morroco later in the year.

Reacting to the situation, one of the Super Falcons officials alleged;

Super Falcons players and officials after arriving in Nigeria at 12 midnight, were delayed for over three hours at the Nnamdi Azikiwe Airport, Abuja on issues of COVID-19 clearance as the airport officials demanded bribes to clear the team that already took the mandatory Covid test to return home after the victory against Cote d’Ivoire.

Super Falcons coach, Randy Waldrum could not hide his anger either as he described the whole situation as frustrating and complete ‘nonsense’.

This is very frustrating, we had a two-hour flight from Ivory Coast and we have been in this room for almost two and a half hours. It is very frustrating to come back home and the players have to go through this. This is nonsense, all these COVID rules… we have already taken the test multiple times to be able to play the game, so I don’t really understand it, but it is very frustrating

On her part, Onome Ebi, Falcons defender, said the situation is confusing for the players as “all the doors are locked, and we can’t go outside.”

They locked everywhere — all the doors are locked, and we can’t go outside. I don’t even understand what’s happening. We are just arriving after a very crucial game, and all the girls are tired, and some of the girls are crying because we can’t go out and we don’t know what to do.

The Super Falcons were eventually freed in the morning after the intervention of Nigerian Football Federation (NFF).

Reacting, many fans slammed FG and NFF for the shoddy treatment of the country’s worthy ambassadors, who have done well and deserves to be celebrated and not humiliated under any guise.

Watch some videos of the incident below:

Russia: FG To Evacuate Nigerians In Ukraine As Soon As Airports Reopen

Super Eagles Coach, Peseiro Not Indulged In Rift With NFF…