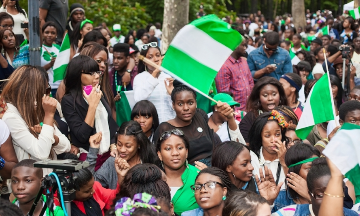 Thousands of Africans including Nigerians fleeing Ukraine have reported witnessing racial discrimination at various borders of the country amid Russian invasion.

They accused officials of seizing their passports and being subjected to all forms of maltreatment, adding that they are not being allowed to cross the borders.

Read Also: FG To Evacuate Nigerians In Ukraine Through Poland

Recall that the Federal Government had directed Nigerians fleeing Ukraine to four Polish borders for their safety.

Chairman/CEO, Nigerians in Diaspora Commission, Abike Dabiri-Erewa, in a viral video on Saturday, said out of the eight borders between Poland and Ukraine, four had been recommended for Nigerians to use.

Important information for Nigerians in Ukraine from the Chairman/CEO Nigerians in Diaspora Commission, Abiike Dabiri-Erewa.#RussiaUkraineWar pic.twitter.com/K8oWDpYcrP

Ukraine is home to thousands of African students who study medicine, engineering, and other technical fields.

Morocco, Nigeria and Egypt are in the top 10 countries with students in Ukraine.

However, since rescue mission began, African students have taken to social media platforms especially Twitter to detail their painful experiences, ranging from trekking long distances and surviving the cold, to experiencing racism in the face of danger.

The alleged ill-treatment is amid suggestion of Hungary, Budapest and Slovakia borders as alternatives for Africans fleeing Ukraine.

He noted that Kuleba denied the alleged maltreatment and the “problem is the result of chaos on the border and check points leading to them.”

I spoke on the phone with the Minister of Foreign Affairs of Ukraine, Dmytro Kuleba. Expressed sympathy for the needless loss of life and destruction and reiterated Nigeria’s recognition of Ukraine’s sovereignty and territorial integrity.

The Minister of Foreign Affairs of Ukraine reverted to state: “It’s official: no restrictions for foreign nationals to leave the country exist. Problem is the result of chaos on the border and check points leading to them.

I am personally coordinating with our missions in Ukraine, Poland, Russia, Romania and Hungary to ensure we get our citizens out of Ukraine and bring back to Nigeria those ready to return, while supporting those who are remaining in Ukraine.

Check out some videos and reports of the racial discrimination cases below;

Watch how they are threatening to shoot us!

We are currently at the Ukraine -Poland border.
Their Police and Army refused to let Africans cross they only allow Ukrainian.
Some have slept here for 2 days under this scorching cold weather, while many have gone back to Lviv. pic.twitter.com/47YG4gxFC4

A video shows Ukrainians blocking Africans from getting on rescue trains.

We stand with people of Ukraine against the unrighteous Russian invasion. But let’s take a moment to talk about racism, anti-blackness and social injustice.#AfricansinUkraine pic.twitter.com/vKoNrDJ6tJ

Let us all amplify what the Ukrainian government are doing to our fellow Africans in Ukraine. This is pure racism and act of wickedness, that’s what we are witnessing right now. We should never feel pity or sympathy for racists, not in this 21st century! Let’s spread the world!

Black Africans are being treated with racism and contempt in Ukraine & Poland. West cannot ask African nations to stand in solidarity with them if they cannot display basic respect for us even in a time of war. Ignored in a pandemic and left to die in war?!! UNACCEPTABLE.

My heart goes out to Ukraine. Double heartbreaking to hear stories of racism that Africans are suffering in Ukraine right now. There are multiple accounts of African students being pushed off the evacuation buses.

Still reports of racism preventing Black people from joining the queue for documentation at the Ukrainian border should be looked into @ZelenskyyUa. Surely, Africans should be allowed the freedom to choose to leave Ukraine, more so in this situation #AfricansinUkraine

I hate systematic racism, Poland Armed Forces and Police are reportedly threatening to shoot Africans who fled Ukraine and are trying to cross Poland’s border for safety, while non-Africans get easy passage. Smh

The racism on Africans by Ukraine and Poland is why many people in Africa aren’t bothered by the war.

Even in the face of war, you’re still treating people by the color of their skin.

You were all standing with Ukraine now that the Ukrainian soldiers and the police aren’t allowing the black to close their borders as they seek refugee in Poland, how will we Africans react?
Racism is bad…. We need a united Africa, we ain’t safe.
United States of Africa.
Putin

I was in solidarity with Ukraine, but after seeing what they are doing to Africans. Pure racism. #AfricansinUkraine #racistborders #RacistEU pic.twitter.com/ByZEZpLGhS

Africans left stranded at the train station after being blocked from boarding a train to safety(Poland) yet they have been standing with Ukrainians #racism #Ukraine #ukraineracism pic.twitter.com/CLO5fCNzsB

Ukraine Soldiers are blocking Africans from getting to the train to get out of the country.😭 😭 💔
Racism at its peak pic.twitter.com/0pC7hfM6iS

Footage emerging on social media of black Africans not being allowed to cross the border out of Ukraine.#Ukraine
Ukrainians
Putin#racism pic.twitter.com/r1OTKkpAcH

So in the time of war, Africans are still being treated with racism 💔
anyway I’m not surprised because the Ukrainian has received many racism sanctions towards blacks. They are not even shy to show in a time like this

After targeting #AfricansinUkraine , the Ukraine police is beating Indian students. This kind of #racism should be condemned. These Indian students were fleeing towards Poland. Discrimination against Asians and Africans should not be tolerated. #Zelensky #RusiaVsUkraina pic.twitter.com/SszBZJLeyp

Racism is really hurting the world. Africans (blacks) are showing their supports to Ukraine yet the Ukrainian soldiers are denying them to enter rescue trains and crossing border to seek for refuge🤦

Let blacks defend their own I suggest 🙋#RussiaUkraineWar #AfricansinUkraine pic.twitter.com/t7eur0eCla