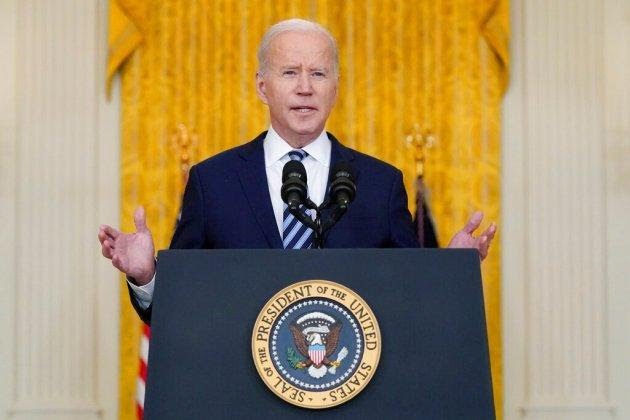 US President Joe Biden has on Thursday condemned Vladimir Putin for his invasion of Ukraine and announced a series of new sanctions on Russian financial insitutitions that he said will have a ‘severe‘ effect on that nation’s economy.

Biden noted that four Russian banks, holding around $1 trillion in assets, have been sanctioned, including the country’s largest bank.

Without going into detail, Biden expressed that the United States will also freeze their U.S. assets, including Russia’s second-largest bank, VTB, following similar penalties announced on Tuesday for two other Russian banks.

The president says the U.S. and its allies will also make it more difficult for Russian state-owned companies to seek financing in U.S. and European markets.

He added that US will restrict Russia from importing technology in certain “strategic” economic sectors, a move Biden says will hamper Russia’s defense industry and prevent the country from modernizing its economy.

We have purposefully designed these sanctions to maximize the long-term impact on Russia and to minimize the impact on the United States and our allies.

We will limit Russia’s ability to do business in dollars, euros, pounds, and yen. Between our actions and those of our allies and partners, we estimate that we will cut off more than half of Russia’s high-tech imports. We will strike a blow through their ability to modernize their military.

The sanctions notably did not target Russian energy companies, a major source of the nation’s wealth. However, Biden and his fellow leaders have expressed concern about energy prices particularly as the cold weather lingers.

Biden also has been presented with a range of options for a cyber security attack on Russia that would hamper its ability to run the invasion.

The options include cutting off Russia from the internet and shutting down the switches that control the railway system that is moving troops into position, NBC News reports.

For weeks, U.S. officials tried to deter Russia from attacking by threatening a large slate of sanctions, but some experts think Putin is willing to tolerate the cost of any economic penalties.

Biden did not announce plans to cut Russian banks out of SWIFT, a Belgium-based global network that banks rely on to send payment requests to each other.

Some experts say blocking Russia from SWIFT would be a “nuclear option” with wide-ranging economic impacts.

Biden told reporters restricting Russia from SWIFT is still “always an option,” but he claimed the new penalties on major Russian banks will be equally consequential.

Several European countries also pledged to sanction Russia earlier on Thursday. British Prime Minister Boris Johnson said he will freeze the assets of Russia’s second-largest bank, sanction some Russian elites and ban Aeroflot from operating in the United Kingdom. The European Union is also discussing a sweeping set of sanctions.

Germany also blocked certification of Nord Stream 2, a not-yet-operational natural gas pipeline that would connect Germany with Russia, and Biden pledged sanctions against the company that built the pipeline.

Fair Pressure On Buhari By Biden To Ensure Free, Fair…