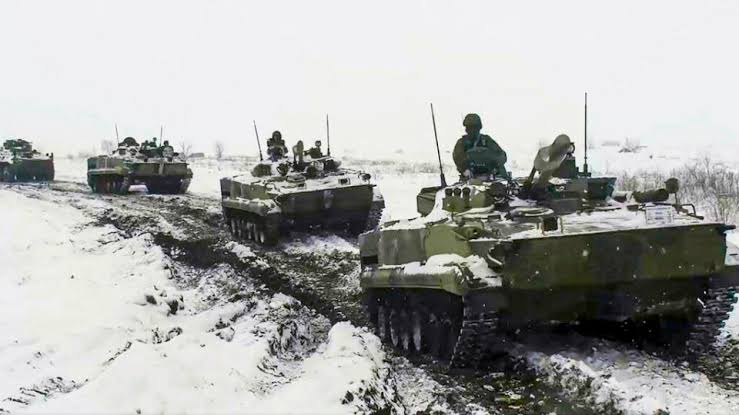 Germany has on Saturday advised German citizens without an “imperative” reason to stay in Ukraine to leave, saying a “military conflict cannot be excluded” after Washington warned a Russian invasion could begin “any day”.

“Tensions between Russia and Ukraine have again shot up in the last few days due to the massive movements of Russian military units near the Ukrainian border,” the German foreign ministry said.

Read Also: White House Urges Americans To Leave Ukraine In Next ‘24 To 48 Hours’ Amid Fears Of Russia Invasion

If you are currently in Ukraine, make sure that your presence is imperative. If that is not the case, please leave the country for the time being.

Germany also said it was reducing its diplomatic representation in Ukraine. “We will keep our embassy open in Kyiv but reduce diplomatic staff,” said Baerbock during a visit to Egypt.

Read Also: US Believes Putin Could Invade Ukraine Within Days

Belgium and the Netherlands joined Germany in becoming the latest Western countries to advise their citizens to leave Ukraine. Russia also announced that it had withdrawn some diplomatic staff fearing “provocations” from the West or Kyiv.

The US embassy in Kyiv on Saturday ordered the evacuation of non-emergency staff.

Russian leader, Vladimir Putin was due to talk to US President Joe Biden and France’s Emmanuel Macron by telephone later on Saturday.

After the Soviet Union’s collapse in 1991, the successor states’ bilateral relations have undergone periods of ties, tensions, and outright hostility.

In the early 1990s, Ukraine’s policy was dominated by aspirations to ensure its sovereignty and independence, followed by a foreign policy that balanced cooperation with the EU, Russia, and other powerful polities.

Relations between the two countries have been hostile since the Revolution of Dignity, which toppled Ukraine’s elected president, Viktor Yanukovych and his supporters, because he refused to sign a political association and free trade agreement with the European Union that enjoyed majority support in Ukraine’s parliament.

Ukraine’s post-revolutionary government wished to commit the country to a future within the European Union (EU) and North Atlantic Treaty Organization (NATO), rather than continue to play the delicate diplomatic game of balancing its own economic and security interests with those of Russia, the EU, and NATO members.

In 2004, the Czech Republic, Estonia, Hungary, Latvia, Lithuania, Poland, and Slovakia had joined the EU, followed by Bulgaria and Romania in 2007.

Russian government feared that Ukraine’s membership of the EU and NATO would complete a western wall of allied countries by restricting Russia’s access to the Black Sea.

With South Korea and Japan being allied to the US, the Russian government was concerned that Russia was being ring-fenced by potentially hostile powers.

This region has a Russian ethnic majority. By early 2022 the Russo-Ukrainian War had killed more than 13,000 people, and brought some Western sanctions on Russia.

In 2019, amendments were made to the Constitution of Ukraine, which enshrined the irreversibility of the country’s strategic course towards EU and NATO membership.

Throughout 2021, Russian military buildup on the border of Ukraine has escalated tensions between the two countries and strained bilateral relations, with the United States sending a strong message that invasion would be met with dire consequences for Russia’s economy.

Despite this, Russia has repeatedly denied having plans to invade Ukraine.