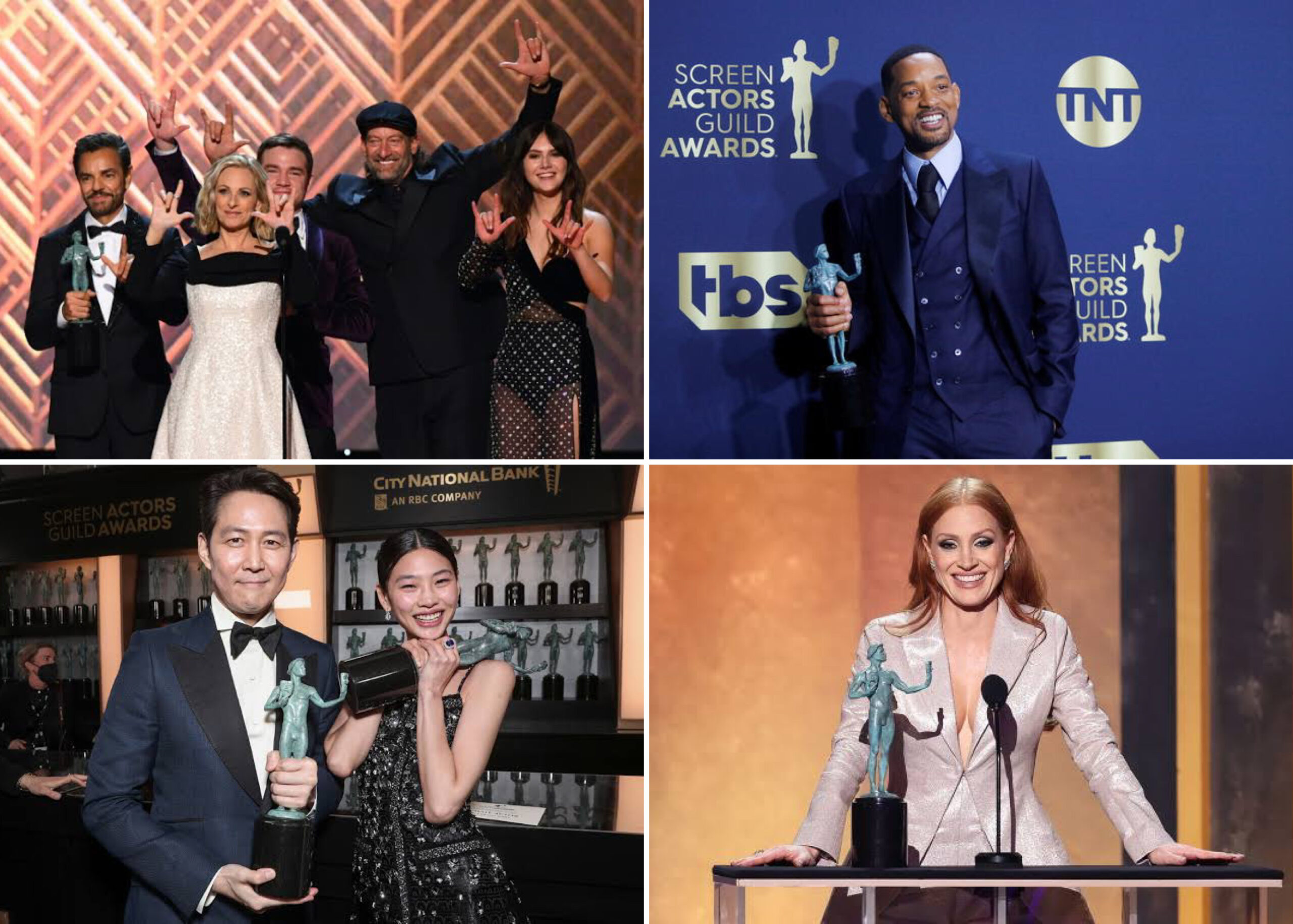 Screen Actors Guild (SAG) has held its 28th award ceremony which honor some of the year’s best television and film performances by actors.

“CODA,” “Ted Lasso” and “Succession” were the big ensemble cast winners of award ceremony that held from Barker Hangar in Santa Monica on Sunday.

Chosen by their peers, SAG nominees and winners are generally considered better indicators of who might triumph in the acting categories at the Oscars this yeae.

Leading the film nominees this year were “House of Gucci” and “The Power of the Dog,” with three nominations apiece, while TV series winners “Ted Lasso” and “Succession” were tied for five.

However, deaf family drama, Child Of Deaf Adults “CODA” took top honors at an unpredictable and history-making 28th Screen Actors Guild Awards that also saw wins for the leads of “Squid Game,” the cast of “Ted Lasso” and Will Smith.

“CODA,” Sian Heder’s heartwarming Apple TV+ coming-of-age film featuring a trio of deaf actors in Marlee Matlin, Troy Kotsur and Daniel Durant, along with newcomer Emilia Jones, winning best ensemble. The film has been seen as a watershed moment for the deaf community in Hollywood.

“This validates the fact that we, deaf actors, can work just like anybody else. We look forward to more opportunities for deaf actors,” said Matlin on stage before teaching the crowd sign language for “I love you.”

Matlin is the only deaf actor to win an Oscar, but her “CODA” co-star, Kotsur, may be in line to join her. Kotsur won best supporting actor Sunday, becoming the first deaf actor win an individual SAG award. When his name was read, the 53-year-old veteran actor plunged his head into his hands.

Netflix’s “Squid Game,” the first non-English language series nominated by the actors guild, came on strong with three awards, including Lee Jung-jae for best male actor in a drama series and Jung Hoyeon for best female actor in a drama series. Those wins came over the likes of “Succession” stars Brian Cox and Jeremy Strong, and Reese Witherspoon and Jennifer Aniston of “The Morning Show.”

Helen Mirren was honored with the SAG Life Achievement Award.

Here are the winners and nominees for the 28th SAG Awards;

Outstanding performance by a male actor in a leading role
Will Smith, “King Richard” | WINNER
Javier Bardem, “Being the Ricardos”
Benedict Cumberbatch, “The Power of the Dog”
Andrew Garfield, “Tick, Tick … Boom!”
Denzel Washington, “The Tragedy of Macbeth”

Outstanding Action Performance by a Stunt Ensemble in a Television Series
“Squid Game” | WINNER
“Cobra Kai”
“The Falcon and the Winter Soldier”
“Loki”
“Mare of Easttown”.