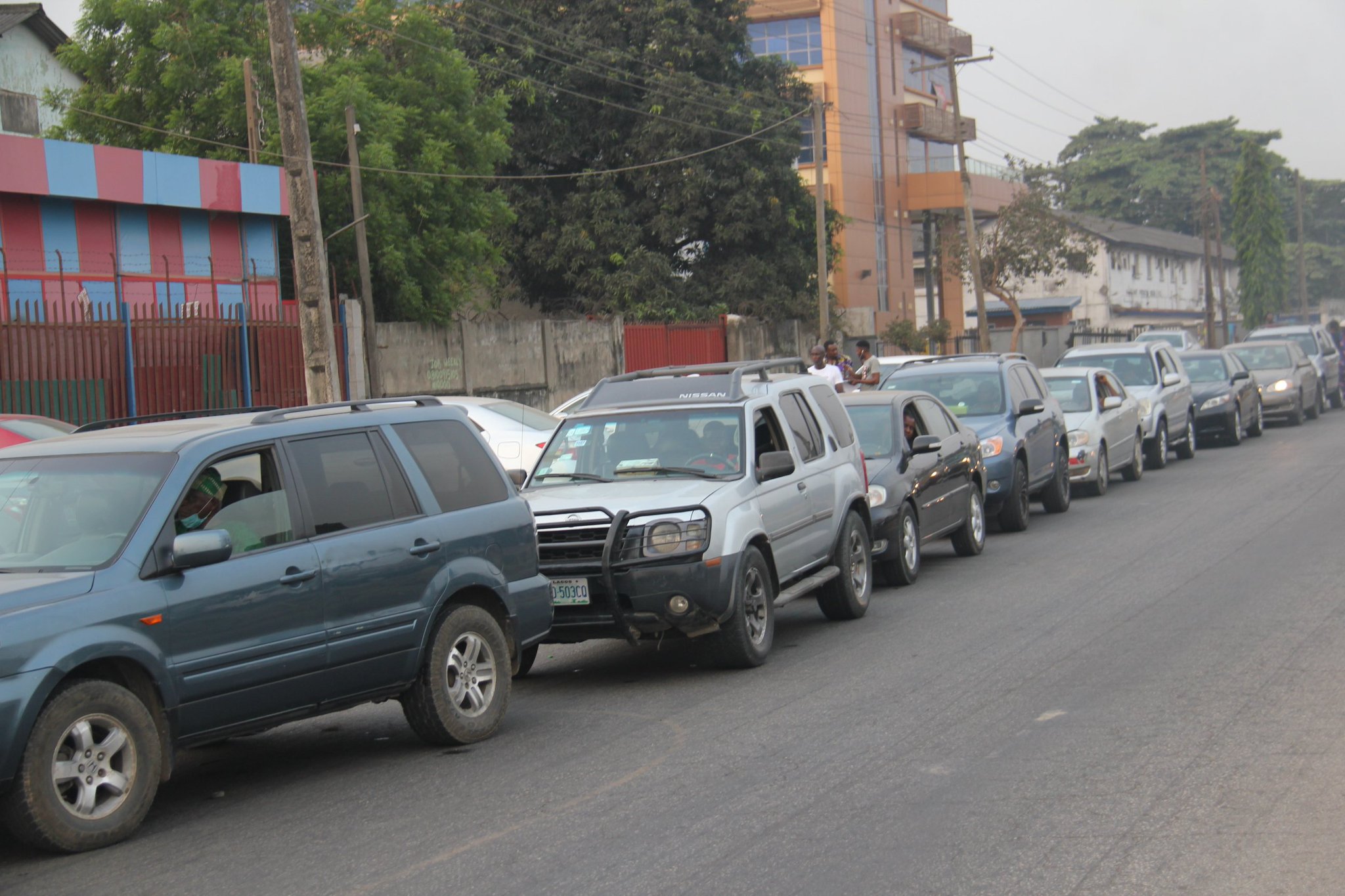 Nigerians have taken to social media to express concern, frustration and anger over fuel scarcity that is being experienced in some parts of the country.

Long queues were spotted on Monday in parts of Lagos and Abuja, causing motorists to hike fare amidst gridlock occasioned by the scarcity.

According to Guardian, the panic began gradually over the weekend when unusual long queues of vehicle at various filling stations in Ikoyi, Victoria Island and Lekki were noticed as residents spent longer period trying to buy Premium Motor Spirit (PMS), also known as petrol.

While this was attributed to increased demand for fuel due to power outage following a fire incident that led to the shutdown of Nigeria’s largest power plant, Egbin, from the national grid, last week, the long queues persisted yesterday morning despite improved power supply.

There were long queues on Awolowo road in Ikoyi, which caused gridlock along the axis. Most of the fuel stations in the metropolis claimed they were without supply.

The few stations that had supply attracted long queues. From Ojodu-Berger to Lekki, Gbagada, Alapere, Oshodi-Apapa axis, Ajah, Sangotedo, Mile-2, among others, long queues were sighted in filling stations, which in some stations spiraled into the major roads.

Many commuters along Lekki-Epe Expressway, including Sangotedo and Victoria Garden City (VGC) axis had a hectic time in traffic.

On the Island (Ikoyi, Victoria Island and Obalende axis), only a few stations had supply with manageable queues. It was the same situation along the Lagos-Ibadan Expressway.

Some commuters resorted to trekking long distances to get to their destinations, while commercial transporters took advantage of the situation to hike transport fares on busy routes.

The fuel scarcity comes after some members of Nigerian Association of Road Transport Owners (NARTO) discontinued operations in protest against the low freight rate for petrol which they receive from government.

National President, NARTO, Yusuf Othman, told journalists in Abuja on Monday that “our people have parked their trucks and more people are going to park (theirs).”

Also, National President, Independent Petroleum Marketers Association of Nigeria, Chief Ukadike Chinedu, also stated that the fear over subsidy withdrawal had been in the minds of both private depot owners and some retailers, leading to product shortage at filling stations.

I’ve explained to you that DPOs are studying the situation around subsidy, since the government has been making various statements on this matter and this has its way of affecting the market.

They (government) said they want to fully deregulate. That statement and similar ones which some ministers made that by 2022 we are going to start full deregulation, made some PDOs decide to hoard or withhold their products.

They (PDOs) are doing this to be able to match up with the cost of petrol when it rises above N300/litre upon full deregulation. Now, this became a bottleneck in terms of the chain of demand and supply.

So people who were taking petroleum products out of Lagos from the PDOs stopped a little bit to be able to look at the market value and their cost of logistics.

That was what put a gap in the chain of distribution that led to the appearing and disappearing queues in many parts of Abuja and the north, as well as in some other locations of Nigeria.

There are also rumours of adulterated fuel being in circulation.

A comedienne, Ashmusy few days ago went hard on popular filling station, Northwest by accusing the filling station of selling water to her and three other customers instead of fuel.

She said the adulterated fuel damaged the engines of her car and the three other persons.

The NNPC Limited wishes to assure the public that the company has sufficient PMS stock to meet the needs of Nigerians. The public is therefore, advised not to engage in panic buying of petrol; and to ignore all rumours that may suggest otherwise.

It stated that in line with the existing laws of the land, NNPC was deeply committed to ensuring energy security for the country.

See some reactions from concerned Nigerians below;

According to a friend, oil marketers are not accepting the fuel that was imported due to contamination.

Mainland is the land flowing with milk and honey. The only thing flowing on the Island is flood. Wahala fun Aquamen.

VIDEO: Video alleges potential fuel scarcity in several filling stations to be connected with NNPC imported pms with high sulphur & marketers, esp. those who imported from a certain cargo have been advised not to sell.

Be careful where you buy fuel pic.twitter.com/UIQXP0mjUt

Fuel Scarcity Returns To Lagos, Stations Sell At N200 Per…

Osinachi: Court Steps Down Murder Case Against Husband Of…