FIFA, UEFA Suspend Russia From All Competitions Over Ukraine Invasion 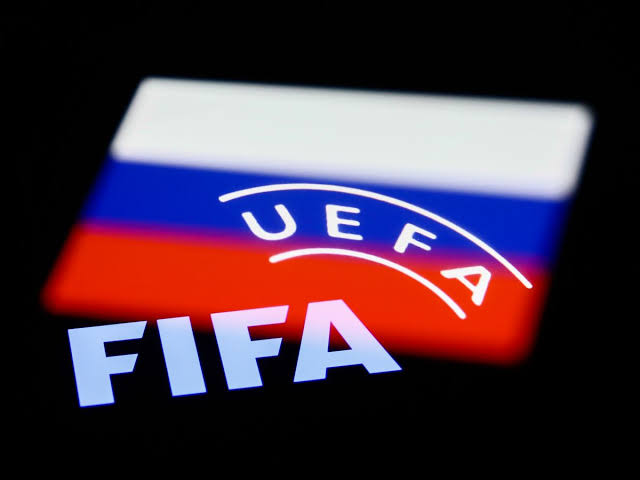 The move comes after International Olympic Committee (IOC) recommended that all Russian and Belarussian athletes be banned from international events following Russia’s invasion of Ukraine.

Following the initial decisions adopted by the FIFA Council and the UEFA Executive Committee, which envisaged the adoption of additional measures, FIFA and UEFA have today decided together that all Russian teams, whether national representative teams or club teams, shall be suspended from participation in both FIFA and UEFA competitions until further notice.

These decisions were adopted today by the Bureau of the FIFA Council and the Executive Committee of UEFA, respectively the highest decision-making bodies of both institutions on such urgent matters.

Football is fully united here and in full solidarity with all the people affected in Ukraine. Both Presidents hope that the situation in Ukraine will improve significantly and rapidly so that football can again be a vector for unity and peace amongst people.

IOC’s executive board made the decision “in order to protect the integrity of global sports competitions and for the safety of all the participants.”

FIFA had come under heavy criticism for its response to Russian actions in Ukraine. Their president Gianni Infantino initially expressed his desire that the conflict would be over in time for the World Cup qualifier between Russia and Poland on March 24 before the FIFA Council announced on Sunday that Russia would be unable to play matches on home soil and must compete under the name “Football Union of Russia.”

Those actions were deemed insufficient by the football associations of Poland, Sweden and the Czech Republic — one of the latter two could face Russia in a qualifying match with a place at Qatar 2022 on the line — all of whom reaffirmed their earlier stance that they would not play a team representing the country. That stance was echoed by numerous other European countries with France calling for their expulsion from the World Cup.

U.S. Soccer joined the calls for Russia to play no part in international football. A statement on Monday said;

The U.S. Soccer Federation stands united with the people of Ukraine and is unequivocal in our denunciation of the heinous and inhumane invasion by Russia. We will neither tarnish our global game, nor dishonor Ukraine, by taking the same field as Russia, no matter the level of competition or circumstance, until freedom and peace have been restored. #WeStandWithUkraine.

FIFA must still decide how to adjust the qualifying bracket in light of Russia’s removal from the international footballing stage.

Poland could be awarded a bye to face the winner of Sweden’s tie with Czech Republic. It is also possible that a third space in the second round of qualifiers could be handed to a team based on their performance in the Nations League; Hungary were the next most successful of these nations after Austria and the Czech Republic. Slovakia, who finished third behind Croatia and Russia in qualifying Group H, could also come under consideration.

European football’s governing body, who on Friday stripped Saint Petersburg of the right to host May’s Champions League final, has also terminated their sponsorship deal with Russia’s state-owned energy corporation Gazprom, a deal worth a reported $45 million a year.

Meanwhile, UEFA is working on the removal of the Russian women’s team from this summer’s European Championships in England.

The last remaining Russian in European club competition — Spartak Moscow — will also be kicked out of the Europa League, handing RB Leipzig a bye to the quarterfinals.