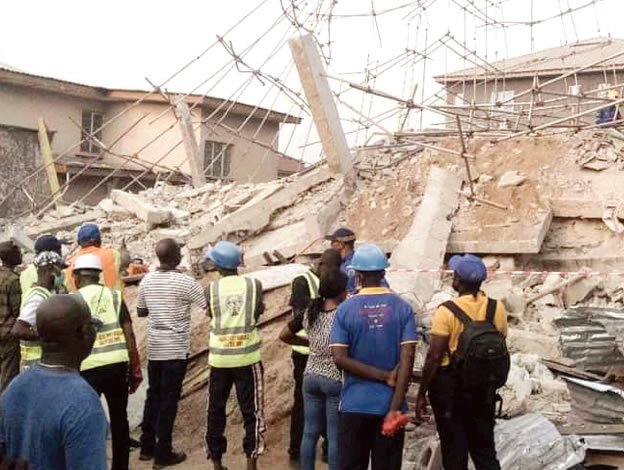 A total of five dead bodies have now been recovered from the collapsed building in the Yaba area of Lagos State.

The recovered bodies were some of the people working at the building site before it collapsed on Saturday at No.16 Akanbi Crescent.

Two workers, however, survived the incident. According to National Emergency Management Agency (NEMA), out of the two, only one was trapped in the building.

The other, it said, is a teenager who escaped by luck after he complained of hunger and was given money to go and get food.

Rescue operations on the building site ended but later resumed on Sunday after indications that some persons might still be trapped in the rubble.

Following the incident, the Lagos State Government said it has arrested the developer of the property.

In a statement on its official Twitter handle late Saturday, it said the developer was arrested for breaking the government seal on the property and violating the stop-work order.

The developer in charge of the site has since been arrested and handed over to the RRS Team, while rescue operation is ongoing.

Saturday’s incident is the latest in the rising cases of building collapse in Lagos State. In November, at least 40 persons were killed following the collapse of a high-rise in the Ikoyi area of the commercial city.

“This is an event that could be described clearly as a national disaster. Mistakes were made from all angles,” the Lagos governor, Babajide Sanwo-Olu said at that time, maintaining that such an event “really should not be happening in a modern-day city like Lagos”.

Experts blame loopholes in regulations and sharp practices by developers for the incessant collapse of buildings.

Meanwhile, residents of Akanbi Crescent, in the Yaba area of Lagos, where a three-storey building collapsed on Saturday, have faulted the rescue team for coming five hours after the incident happened.

The three-storey building under construction collapsed on Saturday, trapping a security guard and construction workers.

Speaking with ThePunch on Sunday, some of the residents berated the Lagos State Emergency Management Agency for coming late for the rescue operation, adding that the only survivor was rescued by the residents.

One of the residents, who spoke on condition of anonymity, blamed LASEMA for using an excavator for the rescue operation.

Another resident, who spoke on condition of anonymity, said the state government should be held liable for the incident.