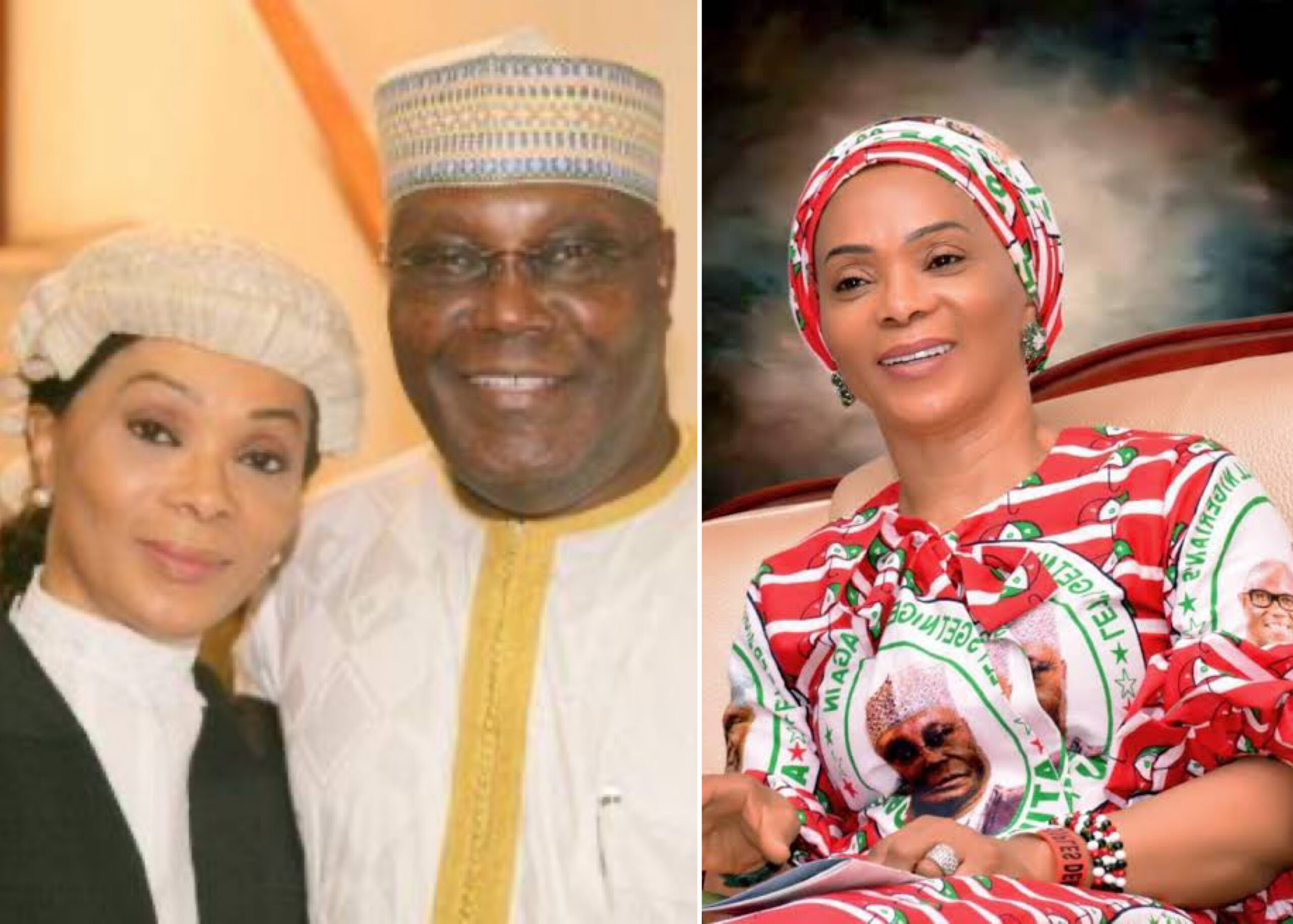 She spoke in a statement sent to an online medium, Trent, on Tuesday in which she provided insights into her marriage and the circumstances concerning their estrangement.

The ex-VP’s wife explained the reason for the divorce, clarifying that she didn’t quit the marriage because Atiku married a new wife.

That His Excellency married a new wife was never the cause of our problem as many have said. His Excellency is a Moslem and I have never questioned him about his wives or intended.

Jennifer clarified that the core reason for the divorce has to do with disagreement over her continued stay in the United Kingdom.

According to her, some of Atiku’s friends tried to mediate and stop the divorce but the efforts failed.

In her statement, Jennifer further addressed the rumours on social media accusing her of disposing of the couple’s Dubai real estate illegally, among other allegations.

She also claimed that Atiku has requested to collect an asset previously given to her, adding that the property in Dubai is a subject of litigation.

Additionally, the lawyer alleged that her life and that of her relatives are being threatened following her divorce from the politician.

As of the time of filing this report, Atiku has yet to make any public statement to react to Jennifer’s claims and reasons for requesting a divorce.

For some time now, especially in the last few weeks, there has been a whole lot of rumours and in circulation about the state of my marriage to his Excellency Alhaji Atiku Abubakar, the Waziri Adamawa, GCON. The stories got more vicious as they continued to circulate. I deem it necessary to defend myself against the calculated propaganda to malign my character and position me in a bad light and damage my name. Without resorting to nonsensical talk, I would address the two key issues at hand:

(1) That I asked for a divorce because His Excellency got married again.

(2) That I sold his Excellency’s house in Dubai.

That I asked for a divorce because His Excellency got married again.

On June. 26, 2021, I asked His Excellency to grant me a divorce in light of the breakdown of our marriage. And, during that period, I told his Excellency that I remain at his Excellency’s service to continue to assist him in his activities even If I am no longer married to him. Suffice it to say that several friends of his Excellency tried to mediate in this matter. I thank them most graciously and remain grateful for their efforts, Peter Okocha, Senator Ben Obi, Tunde Ayeni, Captain Yahaya and Senator Ben Bruce.

Speaking about the cause of the split, the lawyer revealed;

The core reason for the divorce was disagreement over my continued stay in the United Kingdom, to look after my children and several other long-standing issues. I needed to play the role of a mother at this time to the children who have gone through the absence of both father and mother growing up; especially, with the passage of my elder sister who used to look after them.

Furthermore, in light of COVID times, choosing to stay with the children was nonnegotiable. And, in line with Northern culture, the new wife takes up the baton so I can also focus on giving the kids more care.

I was already aware that His Excellency had gotten married to our new wife but that did not deter me from supporting His Excellency and indeed, we went through a most rigorous electioneering campaign and garnered massive support for his election in 2019.

That His Excellency married a new wife was never the cause of our problem as many have said. His Excellency is a Moslem and I have never questioned him about his wives or intended.

I hope this brings this issue to rest as I did not leave the house because of his new marriage.

Speaking about her home, Jennifer expressed;

Moving out of the matrimonial Home in Asokoro and Yola.

The Matrimonial home in Asokoro which we reside was gifted to me by him even before we moved into that home from a previous residence. Indeed, His Excellency caused his Private Secretary to process the DEED of assignment documents for the house, which he did and handed. me the documents. I then commenced processing the title to the property.

During the initial mediation discussion, Excellency denied that he gifted the house even after I showed him the document with the signatures of his aide, his Excellency asked me to give him the deed of gift. “When I asked him, where will me and the kids stay when we come to Nigeria?”, he told me that since I am the one that asked for a divorce, I should find a place to stay and subsequently, I moved out.

His Excellency further gave orders to have my nephews living with me in the house ejected within an hour of his order and gave orders that I and my family members are not allowed to enter the house. Hence, during my last visit to Nigeria in December, 2021, I stayed at a hotel. I have long released these assets to him and hereby reiterate that thee titles are at his disposal to pick up whenever he deems fit.

There has been a lot of speculation on the Dubai home. For a while now, I had purposely stayed away the Dubai until I took custody of that property September 2021 after his Excellency reneged on his word to give the current value of the said property in exchange. When I came to Nigeria, in early September, 2021. I asked to have a private conversation with His Excellency. During that conversation, I informed his Excellency that once I get back to the United Kingdom, I will go to Dubai and take over the house. He subsequently departed for his medical trip to Germany refusing to address any of the issues I privately wanted to conclude with him outside of third parties.

I subsequently travelled to Dubai, and took custody of the said property. Once I did that, on 18 September 2021, His Excellency sent me a text and I quote: “I hear you have moved to Dubai to takeover the house. I am still in Germany for my medicals. Make sure all my properties including (redacted) are intact so I can collect all my properties. I wish you well’.

I responded to him: “ Excellency, I am left with no other option as we need to get on with our lives amicably. I hope your medicals are coming up good. I wish you well too’.

On 19th September, 2021 in response to his text that I am not being amicable and I quote ”Good morning, with due respect, Excellency, I told you on Saturday before you left for Germany, that I was going back to UK, take [our son] back for his test, then come to Dubai. I reiterated that day the need for an amicable resolution. I maintain that stance and remain at your service Your Excellency’.

Subsequently, His Excellency sent the driver to take possession of all the cars.

The truth subsists with regard to the Dubai house. I will make no further comments on it because it is the subject of litigation filed by his Excellency against me.

I need to also put on record that if I wanted to take His Excellency assets, I would not have returned to him his property documents in Abuja and Jos and document, allowed the driver to collect his cars, gave up the house in Asokoro and Yola.

The last time I was in Nigeria I called to have the Asokoro and Yola documents delivered to him. It was never picked up and I still state that Excellency is free to send someone to have the documents picked up anytime he deems fit.

Since this incident, I fear for my safety and that of my kids. His Excellency’s security operatives especially Ibro and others have making threats and calling my relatives, friends and staff and searching for my assets to seize and monitoring my phone calls and those of friends and relatiives. For that reason, I have exited my law firm and sold all my assets and moved abroad until peace reigns.

I have done nothing wrong except to ask for a divorce and it pains me that I have to use this medium to address thorny issues but fear that at this point, I would have to put my side of the story on record. It is obvious that a campaign of calumny to total discredit and put me in bad light has begun.

Despite all that has happened, I reiterate that I asked for a quiet divorce which had if it had been granted, we would not be where we are today. Divorce is never an easy process for both parties. I reiterate that I hope we can settle our issues privately and I would remain at His Excellency’s service should he need my help, anytime.