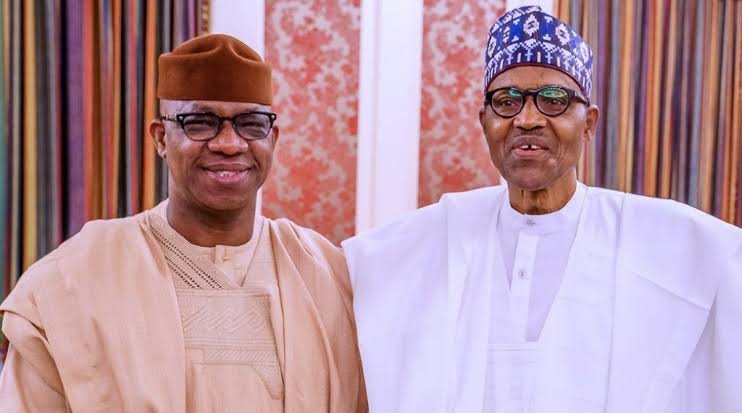 President Muhammadu Buhari has on Thursday morning arrived in Ogun State for the inauguration of some projects executed by Governor Dapo Abiodun.

He arrived on Thursday morning and was received by dignitaries including the state Governor Dapo Abiodun; Lagos State Governor Babajide Sanwo-Olu; Ogun State former Governor Gbenga Daniel, among others.

President Buhari was welcomed at Ijebu Ode-Mojoda-Epe toll plaza by his host and members of the State Executive Council at 10 am.

From there, the convoy proceeded to the Sagamu Interchange at 10:30 am where he commissioned the Gateway City Gate Monument and the reconstructed 42-km Sagamu-Interchange-Abeokuta road.

He is also expected at the Sagamu interchange where he will commission the Ogun city gate and the 42km Abeokuta/ Sagamu road.

Other projects to be commissioned include two housing projects. 527 units of a low and medium Housing Scheme at Kobape and the high-brow, 83 duplexes at the Kings Court Estate at Oke Mosan in Abeokuta, the state capital.

Thereafter, the President is expected to hold a town hall meeting with critical stakeholders and party faithful at the June 12 cultural centre in the state capital.

These projects according to the state government are expected to bring direct benefits to residents of the state and improve the socio-economic development of the state as one of the emerging economies in the country.

See some more videos below;