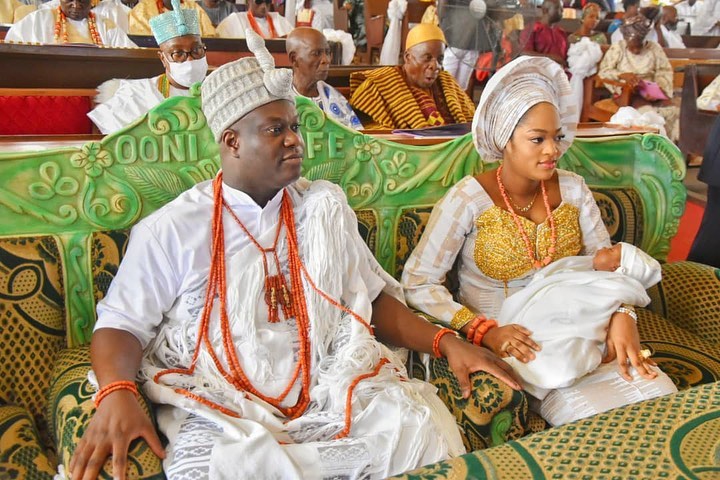 Moses Olafare, spokesman of the Ooni of Ife, Adeyeye Ogunwusi, has said the monarch isn’t aware of the supposed separation announced by his queen, Silekunola Naomi.

Recall that Olori Naomi on Thursday announced via her Instagram page that her three-year marriage to the monarch which produced a son has hit the rocks.

The queen, who runs an interdenominational ministry based in Akure, in her statement, said she tried to make the union work but the 46-year-old monarch’s public identity is at variance with “his true self”.

However, Mr Olafare in an interview with PremiumTimes on Friday said the king, like every other person, read the news of the separation on social media.

About the speculations reported by the social media, I wouldn’t know if it was the queen herself that posted it. But I read in just the way every other person read it, and when I started answering questions on that, I was like ‘based on what I read’.

According to Mr Olafare, the Ooni saw the news of the separation for the first time on social media.

He added that the news of the separation came to the palace as a surprise as there was no indication whatsoever that the queen “was hatching a divorce plot”.

Mr Olafare said a separation “should involve two persons in the relationship, and the appropriate channel to disclose the news of any supposed separation should be from the palace.”

What I will tell you is that when it comes to separation, the palace is not aware. The person that should give information regarding any development is the Ooni, but the Ooni has not told anybody of such. So the position of the palace will remain that we are not aware of this development.

Mr Olafare also confirmed that as at Thursday evening, the queen was still at the palace.

The embattled couple had an elaborate wedding ceremony in October 2018 and welcomed their son on November 18, 2020.

The monarch revealed Naomi Oluwaseyi as his wife on Instagram on October 18, 2018, 14 months after his ex-wife, Zaynab Otiti-Obanor, confirmed that her 17-month-old marriage to the monarch had ended.

Omicron: US To Lift Travel Ban On Eight African Countries From Dec 31