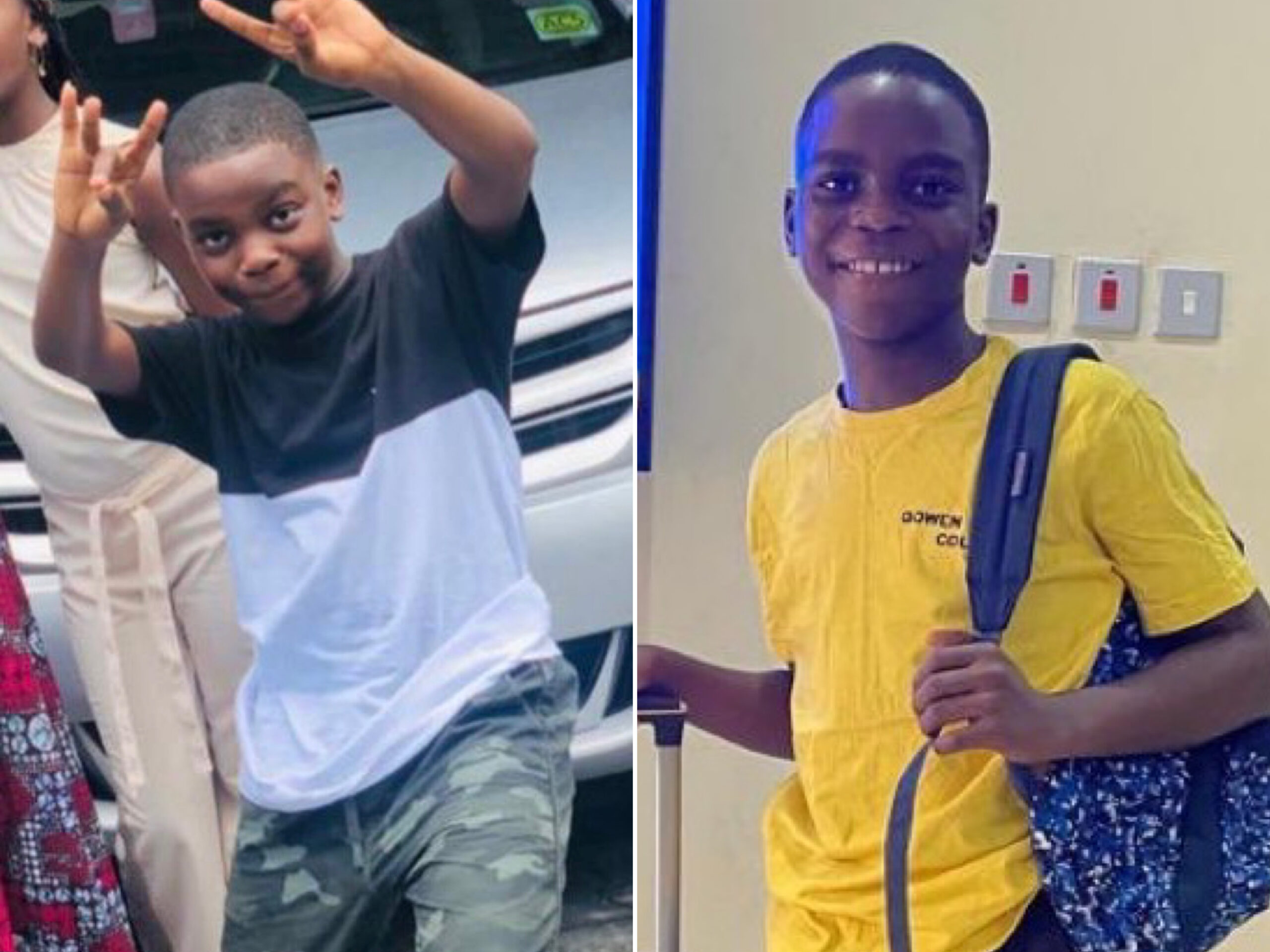 Family of Sylvester Oromoni Jr., a 12-year-old student of Dowen College who died days ago, has released videos to dispute the institution’s claim that their son wasn’t tortured in the school.

In an initial report announcing Sylvester’s death, a Twitter user said to be a cousin to the deceased said Sylvester mentioned the names of some students of Dowen College and alleged they tortured him because he won’t join their cult group in boarding school.

Subsequently,  Dowen College released a statement, denying this report and stated that there is no cult group in the school

The school’s management added that Sylvester Junior injured his hip while playing football and, after initially administering first aid, his family was called to pick him.

However, some videos of his final moments shared by Sylvester’s cousin identified as @Perrisonoromoni on Twitter showed that young boy had severe injuries on him.

His lips was swollen with blood spotted on his teeth, an indication that he also had injuries in the mouth.

The young Oromoni could be seen in the video groaning in pains as his mother and other caregivers were massaging his joints and limbs.

“It shall never be well with them. For them to hit my son like this, my God will judge them,” his mother was heard saying as she massaged him.

“How can the school authorities, Dowen College, not know about this?” She asked agonisingly.

The relative on Twitter also said that the Junior Secondary School Two student complained about his throat and stomach while in the hospital.

“He kept complaining about his throat and stomach. He said he was given something to drink,” Perrison Oromoni wrote on Twitter.

Mr Oromoni had previously said that young Oromoni was battered by his co-students over his refusal to join a cult. According to him, the doctor confirmed that the late student had been beaten up, causing internal damages.

Before passing, he said they’d been pressuring him to join a cult. He was admitted on Friday. He said they were going to kill him if he talked.

The deceased was also said to have mentioned a few names of the students who pressured him to join their cult group before he died.

Many Nigerians have now flame to social media especially Twitter to demand justice for Sylvester and a shut down of the school.

With all the video evidences online, it will be a grave injustice if we don’t protest at Dowen this week or next. Too many powerful institutions getting away with murder! This shouldn’t be one.

First, it was Chrisland.
Then it was the Deeper Life School. And nothing was done.
Now, a child was murdered at Dowen college. Is nothing going to be done as well? Doesn’t Nigeria have government officials in charge of the rights of children?

This Dowen issue makes me so angry!

– The school is still on session?
– So parents of the children that school there heard about this rubbish and are still comfortably leaving their kids there?
– It’s more than 24hours now and nothing has been done?

that doesn’t look any bit like football injuries. Dowen needs to be investigated immediately. everyone in charge should be questioned by law enforcement

A serious country will shut down Dowen first so that they won’t be able to cover anything, external investigations where the schools & alleged students will be invited for questioning.

Other parents must act cos it could be their kid as well.

Justice must be served!

Dowen is a big school with influential old students everywhere.

They should come out to put pressure on the school & demand justice.

The bullies must be apprehended & sent to correctional centres as kids.

I couldn’t watch that Dowen video till the end. I’m enraged!! Arrest everybody. Are you mad?! That child died in pain. Lock all of them up!

No one who went to Dowen is really surprised at the news.

The school culture has always been something reminiscent of a frat house, and the teachers have always turned a blind eye to the toxicity, or given bullies a slap on the wrist, to look cool.

Walahi, God knows that Dowen College won’t open again until they reveal the truth and bear the brunt of everything. You can’t treat my nephew like that, you will collect legally, physically, and spiritually. Watching the videos, ara mi bu mo aso

I keep saying it sha, if I was directly involved in the Dowen issue, the only time the news will reach twitter is after the police arrests me for one or two

But that’s just me.

Even expensive schools in Nigeria have extremely problematic ideas about child rights, school bullying and assault. They are expensive, but they are operated and staffed by Nigerians nonetheless.

If a school like Dowen is culpable, they will never admit it.

Ideally, Dowen should shut down for a few days to concentrate on and investigate this matter properly.

I hope this Dowen story will not die like that little boy’s story that was being sodomized in that other Christian school earlier this year.

First of all, Dowen College needs to be closed down until investigation is completed. Children need to be alive before they can receive education. If the school remains opened, then, the lives of the other kids there are not safe. If I was a parent i’ll go take my child out.

Can you address Dowen College allegedly covering up how a 12yo student in the school’s care is dead as a result of being brutally beaten by other students? https://t.co/fszFCgzDdo pic.twitter.com/8UCAUSeBUG

I just watched the video of the boy that died in Dowen college and there is no way in the world that those injuries were sustained from football.

I also hate that everyone else seems silent, have some empathy for ffs! It doesn’t have to happen to your child before you seek truth

I deeply sympathize with the family of Sylvester Oromoni. I Just saw the video that was recorded before he died. He couldn’t move, mouth swollen, teeth bleeding.. Football injuries don’t cause that much pain!!!
Dowen college, there are a lot of questions begging to be answered.