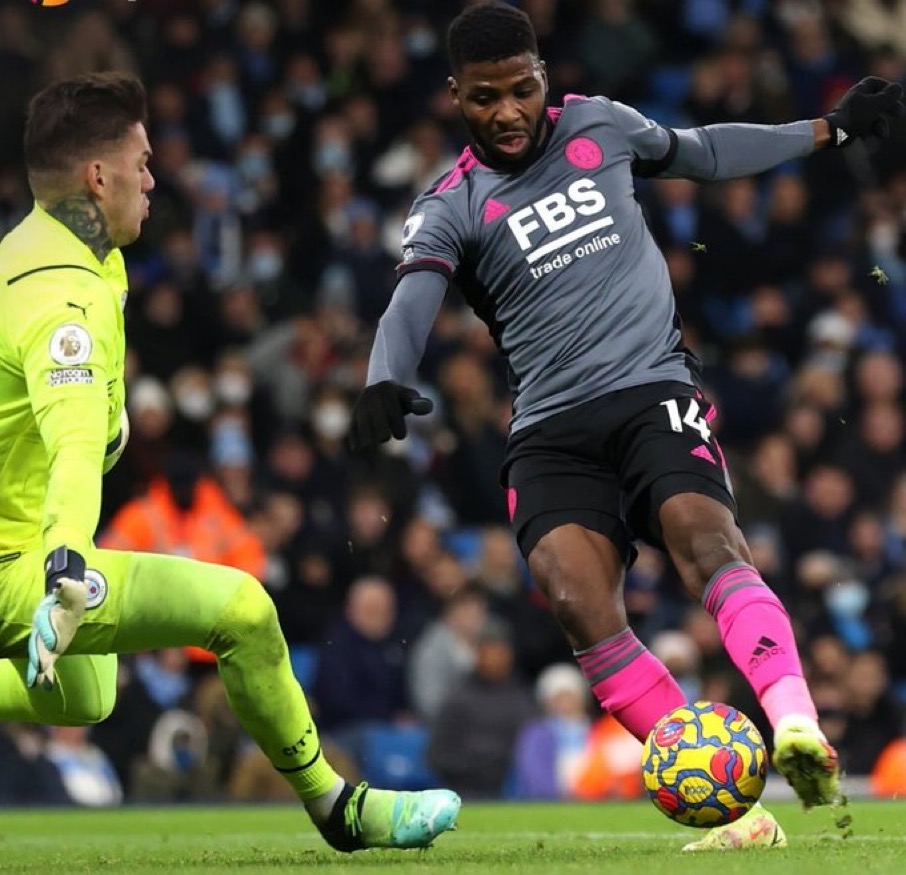 Nigeria’s Kelechi Iheanacho scored but Manchester City powered six points clear at the top of the Premier League after quashing Leicester’s comeback bid in a pulsating 6-3 win on Sunday.

Pep Guardiola’s rampant side scored four times in the opening 25 minutes of a Christmas cracker at the Etihad Stadium.

Ilkay Gundogan bagged City’s third and Raheem Sterling scored a penalty of his own.

James Maddison, Ademola Lookman and Kelechi Iheanacho all netted for Leicester in the space of just 10 minutes early in the second half.

However, Aymeric Laporte killed off the visitors’ hopes of an incredible escape act by heading City’s fifth goal before Sterling scored again in the final minutes.

It was the highest-scoring match in the top-flight on Boxing Day since Manchester United won 6-3 against Oldham in 1991.

With second-placed Liverpool’s match against Leeds on Sunday postponed due to the coronavirus, City were able to extend their lead over their main title rivals.

City’s 4-0 win against Newcastle last weekend made them the first top-flight team to win 34 league games in a calendar year, beating Liverpool’s 1982 record.

A 36th league victory at Brentford on Wednesday would send City into the new year firmly cemented as title favourites.

Phil Foden and Jack Grealish were again among the substitutes after irking Guardiola with their off-field antics, while Rodri, John Stones, and Kyle Walker were absent from the matchday squad altogether.

Guardiola’s rotation worked perfectly as City made a blistering start, taking the lead in the fifth minute.

Bernardo Silva found Fernandinho and his chipped pass reached De Bruyne, who deftly controlled with his first touch before curling a fine finish past Kasper Schmeichel from inside the Leicester area.

It was just De Bruyne’s sixth goal of a difficult injury and Covid-hit season for the Belgian midfielder, who finally looks closer to his peak form.

City had hit seven against Leeds in their previous home game and they were on the goal-trail again in the 14th minute.

Youri Tielemans needlessly pulled down Laporte at a City corner and Chris Kavanagh awarded a penalty after checking the pitchside monitor.

City cut through the Leicester defence again to make it three in the 21st minute.

Joao Cancelo drove in a low cross which Schmeichel could only parry into Gundogan’s path, presenting the German with a simple tap-in.

City were red-hot and Tielemans’ response was a flustered hack on Sterling that conceded another penalty in the 25th minute.

Mahrez ceded spot-kick duties to Sterling and the forward fired into the top corner for his seventh goal in his last 10 matches.

Maddison’s solo effort reduced the deficit in the 55th minute.

Flicking his pass around Ruben Dias to Iheanacho, Maddison timed his run onto the return ball perfectly and produced a clinical finish.

Suddenly, City were creaking at the back and four minutes later Iheanacho picked out Lookman, who scampered clear to fire past Ederson.

As Guardiola fretted on the touchline, Iheanacho increased the anxiety around the Etihad in the 65th minute with a close-range finish after Maddison’s drive was tipped onto the bar by Ederson.

However, Laporte quelled Leicester’s stunning revival in the 69th minute with a powerful header from Mahrez’s corner.

And, with three minutes left, Sterling completed City’s goal-spree with a simple finish from Dias’ header.