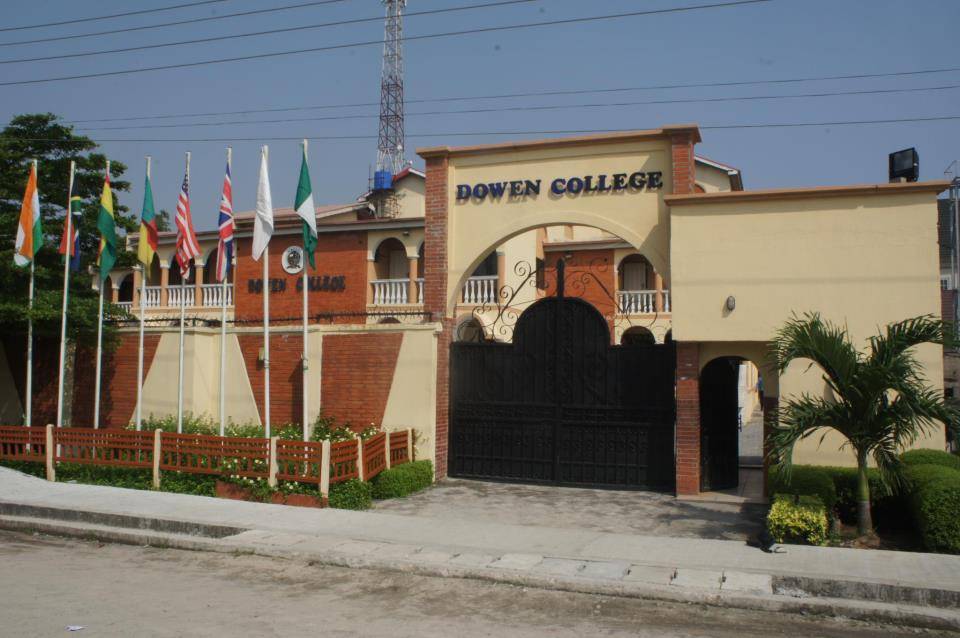 Management of Dowen College, Lagos State has reacted to an allegation that one of its pupils was beaten to death by his colleagues because he refused to join a cult.

On Wednesday, a middle-aged man, simply identified as Perrie, lamented the death of his cousin, a 12-year-old boy who was allegedly beaten to death at Dowen College, Lagos.

The young man who took to his Twitter handle @Perrisonoromoni alleged that the deceased was beaten to death after he refused to succumb to pressure by fellow students to join a cult.

According to him, the deceased mentioned the names of five persons responsible for the pain before he finally gave up the ghost on Tuesday.

Reacting in a press statement, the school claimed the deceased sustained injuries while playing football and was given immediate medical attention by the school’s resident nurse.

Subsequently, the student complained of having pains in his hip and was attended to again, this time by a doctor and a nurse and thereafter taken to his house, the statement said.

The school further said it had carried out a preliminary investigation where it was confirmed that there was no case of bullying, adding that it has policies that are strongly anti-cultism.

It also claimed there is a very cordial relationship between the school and the family.

It is with a heavy heart that we received the news of the sad demise of one of our dearly beloved children. On the 21st day of November 2021, one of the Hostel Parents reported to management that the young boy was injured while playing football. The resident registered nurse immediately administered first aid on him and after he expressed relief, was released to return to his hostel room.

He was in class on Monday 22nd day of November 2021, but during school hours one of his friends accompanied him to the Sick Bay where he complained of some pain in his hip. The doctor examined him and prescribed Ibuprofen for the pain, while the nurse massaged his leg, after which he felt a bit better. In accordance with school policy, the resident doctor called his mother reporting the incident and requesting that she come for him so that he could get further medical attention.

The mother however said she was not in Lagos, spoke and prayed with him on the phone and promised to send the guardian to pick him up immediately for further medical attention.

When the guardian failed to show up, the next day on the 23rd of November 2021, the doctor called the mother again and this time, she assured that his guardian would pick him from school.

His guardian showed up and took him for X-ray after which the guardian informed the school management that the results of the investigation revealed that no part of his body was broken or injured.

The resident doctor also called the mother later in the week to check up on his progress but she informed the doctor that he was sleeping at the time.

As a result, it came as no small shock to us to read wild social media tales that he was beaten by some students and that he specifically mentioned some names.

We immediately commenced investigations and invited the students allegedly mentioned for interview. His guardian was also present during the interviews, which revealed that nothing of such happened.

The whole incident was strange and unbelievable because: The school has effective anti-bullying policies and consequences are well spelt out to all the students. The preliminary investigation showed that there was no fighting, bullying or any form of attack on the boy.

He made no such reports, neither to his sister who is also a student or any other students, prefects, house parents, medical staff or any of the management staff.

The school has two regular nurses and a qualified medical doctor that promptly attend to students’ medical needs. The resident doctor followed the laid down procedure by inviting his mother to take him home for further treatment after initial treatment by the school’s medical staff.

The school has a very cordial relationship with the family as he is the fifth child of the family Dowen College has the privilege to train, including his elder sister who is currently a student at the school.

Furthermore, we state categorically Dowen College is built on core values of godliness and excellence and will not tolerate any acts of cultism, which is why there is nothing like that and there have never been such deviant activities going on, as this is a faith-based school and effective policies are in place to prevent such occurrence.

Dowen College has a cherished legacy of character and learning which has endured for more than 25 years.

We are deeply saddened by the death of this young man who was a dearly beloved student of the school. We extend our deepest sympathy and heartfelt condolences to his beloved family, relatives, friends, classmates and the alumni family at this very difficult time. 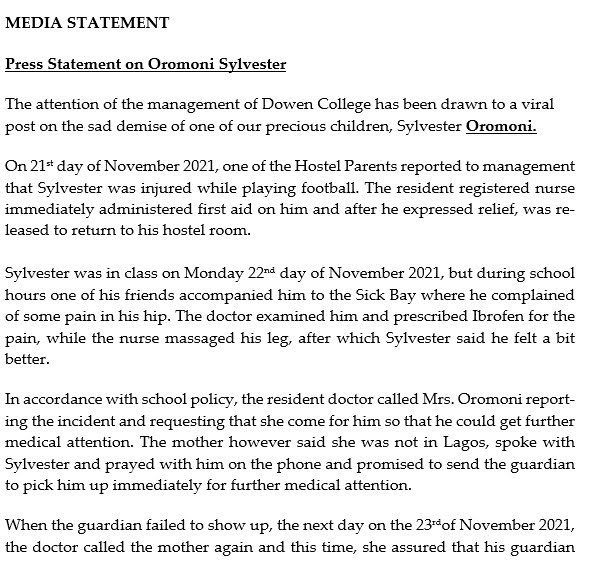 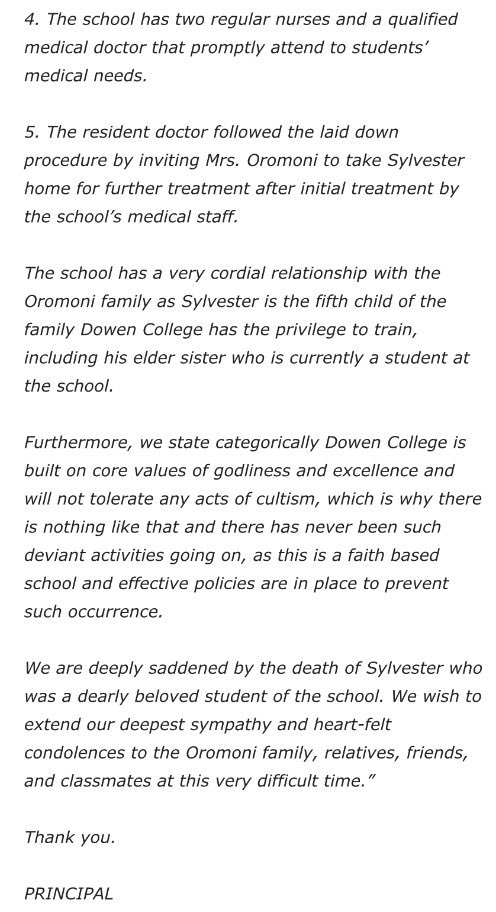 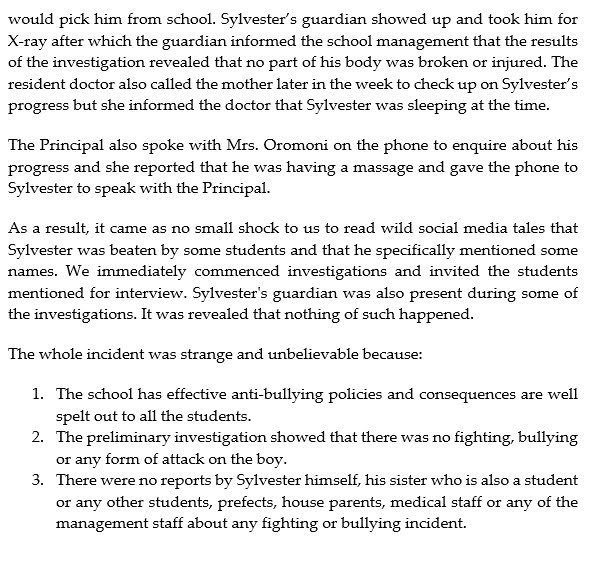