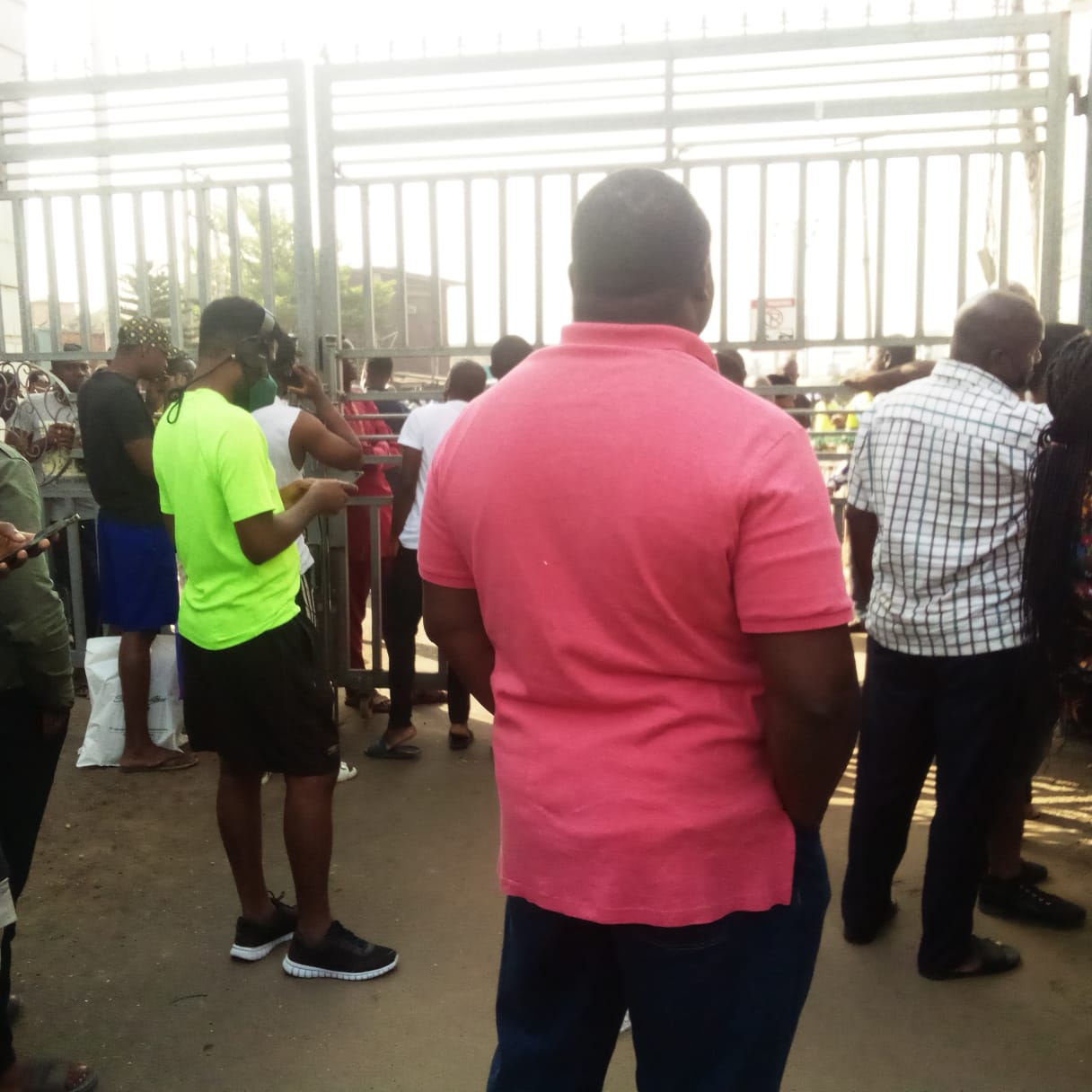 Hundreds of residents and business owners have been thrown into confusion following the invasion of phase 2 of Magodo estate by officers of the Nigeria Police Force (NPF) and some suspected land grabbers on Tuesday evening.

Residents alleged that the police officers accompanied some youths who appeared to be hoodlums into the estate to start marking some houses in the area for demolition.

According to TheCable, a resident said an inscription which reads “ID/795/88 possession taken today 21/12/2021 by court order” has been marked on over 300 houses in the estate. 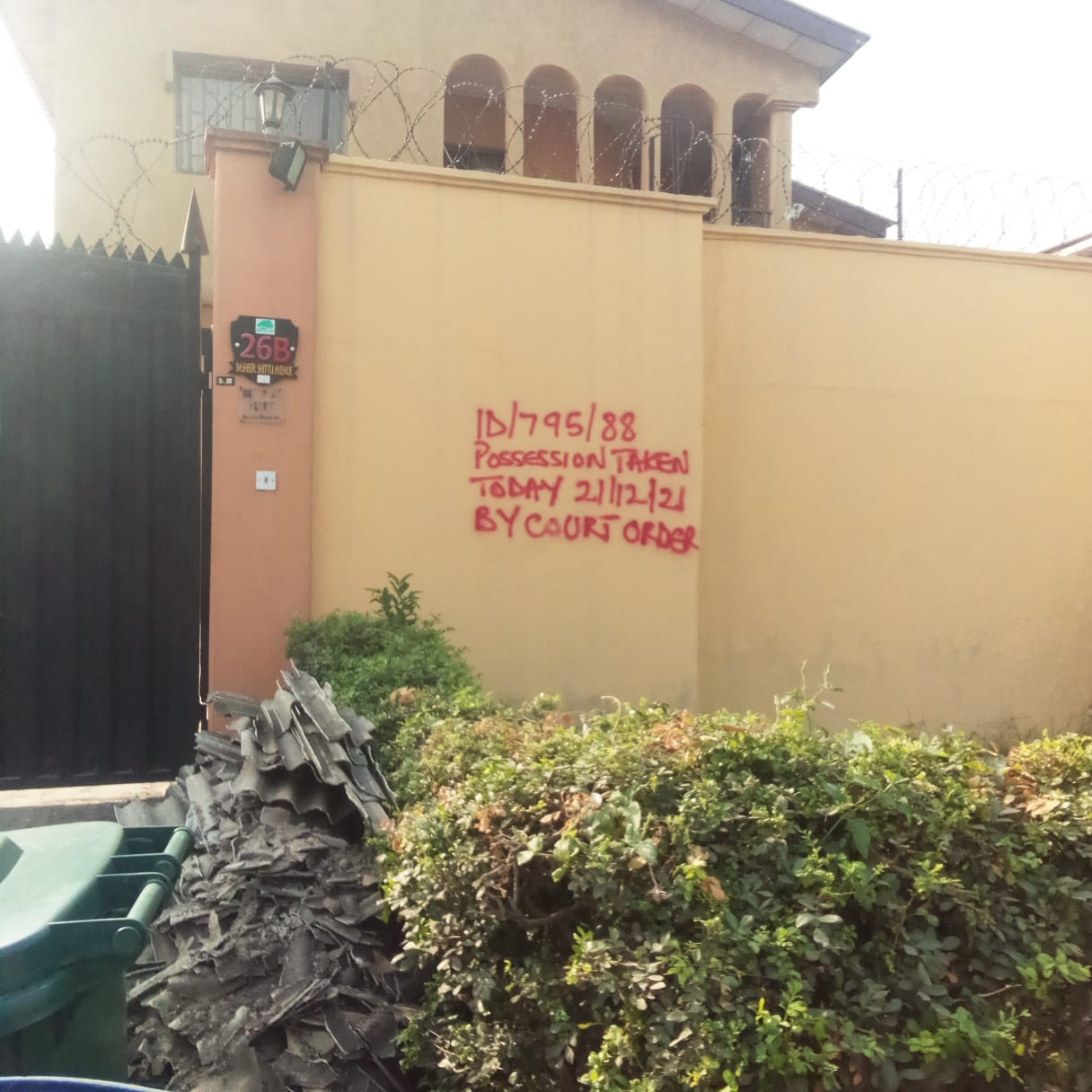 Amid the police siege, many residents came out of the estate’s gate to resist what they described as forceful takeover and attempt to demolish houses in the area.

Reacting, Magodo Residents Association closed the estate gates, leaving many resident going and coming out of the estate stranded.

During the invasion, the suspected landgrabbers, while being assistef by the police, used red and brown inks to inscribe possession taken on various property in the estate.

Meanwhile, Legal Adviser, Magodo Residents Association, Tunji Abdulhameed, said the suspected land grabbers were about invading the estate with a bulldozer when the estate management closed estate gates to prevent the action.

They came around 1pm yesterday; The land grabbers invaded the estate and the police gave them backing. I asked what they were doing here and the police said they are trying to enforce judgment.

I asked for a copy of the judgment but no document was shown to me. What they showed was a newspaper publication which they did themselves to inform the world that they are the owner of the property. 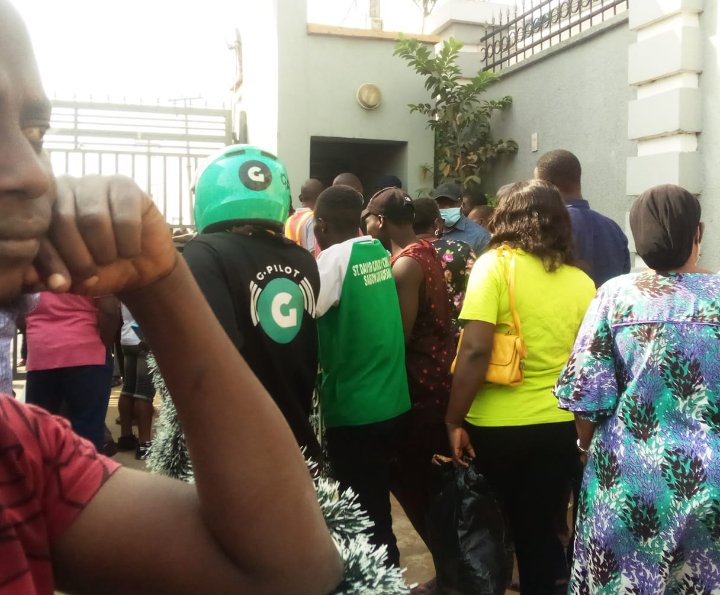 They had a judgment in 1993 and as far as I am concerned the judgment was not properly captured. The judgment said the government should allocate 549 plots to them with no specification to the area, property, location of the plots of land; in fact, there was nothing to ascertain the property they were talking about.

The resident associations had a meeting in the evening and thereafter, we just saw a bulldozer at the front of our gate. The police didn’t go and were with them, the bulldozer is still at the other gate. That was why we closed the gate.

We don’t know whether we are going to open the gate because we don’t know their plan as the land grabbers and policemen are still around. They have a motive they want to achieve; I think the purpose is to use the bulldozer to destroy property.

Despite the estate gates being closed, it was observed that residents and businessmen flooded the gate in a desperate attempt to gain entry.

Also, the effect of the gate closure led to a backlog of traffic that affected vehicular movements around Shangisha area.

On his part, Chairman, Board of Trustee, Magodo Residents Association, Professor Ayodele Ogunye, said residents in the estate had constantly been subjected to different forms of land grabber attacks, adding that the state government should intervene to restore normalcy in the estate. 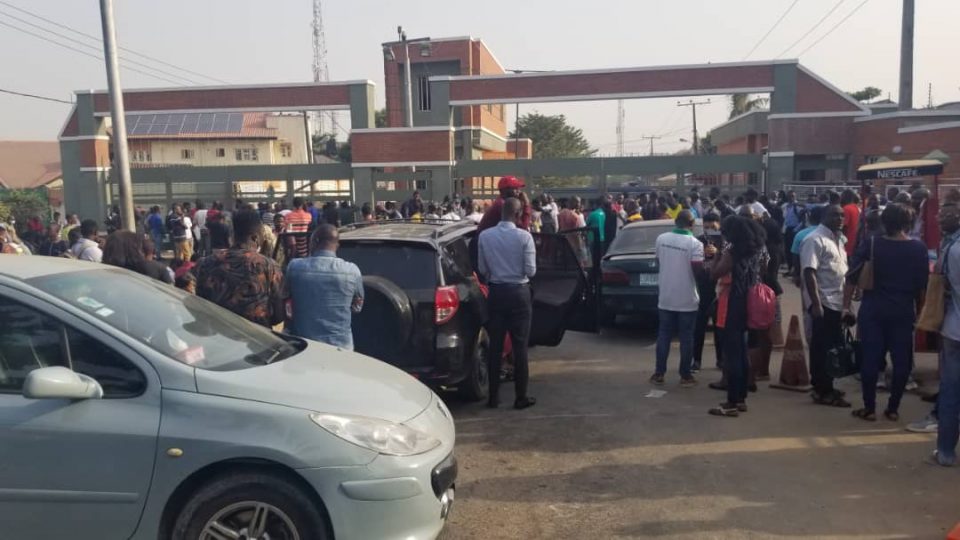 I have been living here since 1992 but we have been having problems with land grabbers until this case became enlarged. It is true that the supreme court had given judgment in the favor of the Adeyiga Family; they are to be giving 549 plots but that judgment did not say 549 plots in Magodo.

Hence, the Lagos State Government allocated plots of land to them along Badagry and Ibeju Lekki. So far, about 300 of them have agreed to take those plots and these people continue to harass us. I have been to Alagbon three times this year on this issue.

Yesterday, in the morning, these people besieged us; they said they were bailiffs trying to enforce the supreme court judgment. They are not Lagos State Government bailiff, if they were, they will wear their jackets. They went to hire some area boys to come in as bailiff.

I spoke with the senior officer that led them and he said he got instruction from the top to follow them. We told them to show us the judgment they are enforcing, and they showed our lawyer a press release. Press release is not a court judgment or court instruction that they should bombard us.

They were marking houses including houses we have been living together since 1992. We gathered that the government was not informed yesterday, how could they come into a government estate without clearance from the governor, the governor said he is not aware about this siege.

However, Adekunle Ajisebutu, Lagos police spokesperson, said he is not aware of police presence in the estate.

Since 1982, the state government and members of the Shangisha Landlords Association have been involved in a legal battle involving plots of land in Magodo.

In 2017, residents of the estate raised the alarm over an alleged plot by 1,000 armed men to invade the estate.

The residents’ association, had on several occasions, complained that landlords in Magodo were being harassed for a case they were not a party to.

See some photos and videos from the scuffle below;

VIDEO: Magodo estate residents trapped in as gates are locked over fears of demolition pic.twitter.com/beBTD2JBOS

The residents of the estate staged a protest after armed men invaded the estate with bulldozers to begin the demolition of houses fully built in the estate. pic.twitter.com/jzbAKlw3R4

Magodo residents protest attempt to demolish houses as armed men invade estate with bulldozer to begin demolition of “virtually all the houses in the fully-built Estate”. pic.twitter.com/hnUPYmma6N 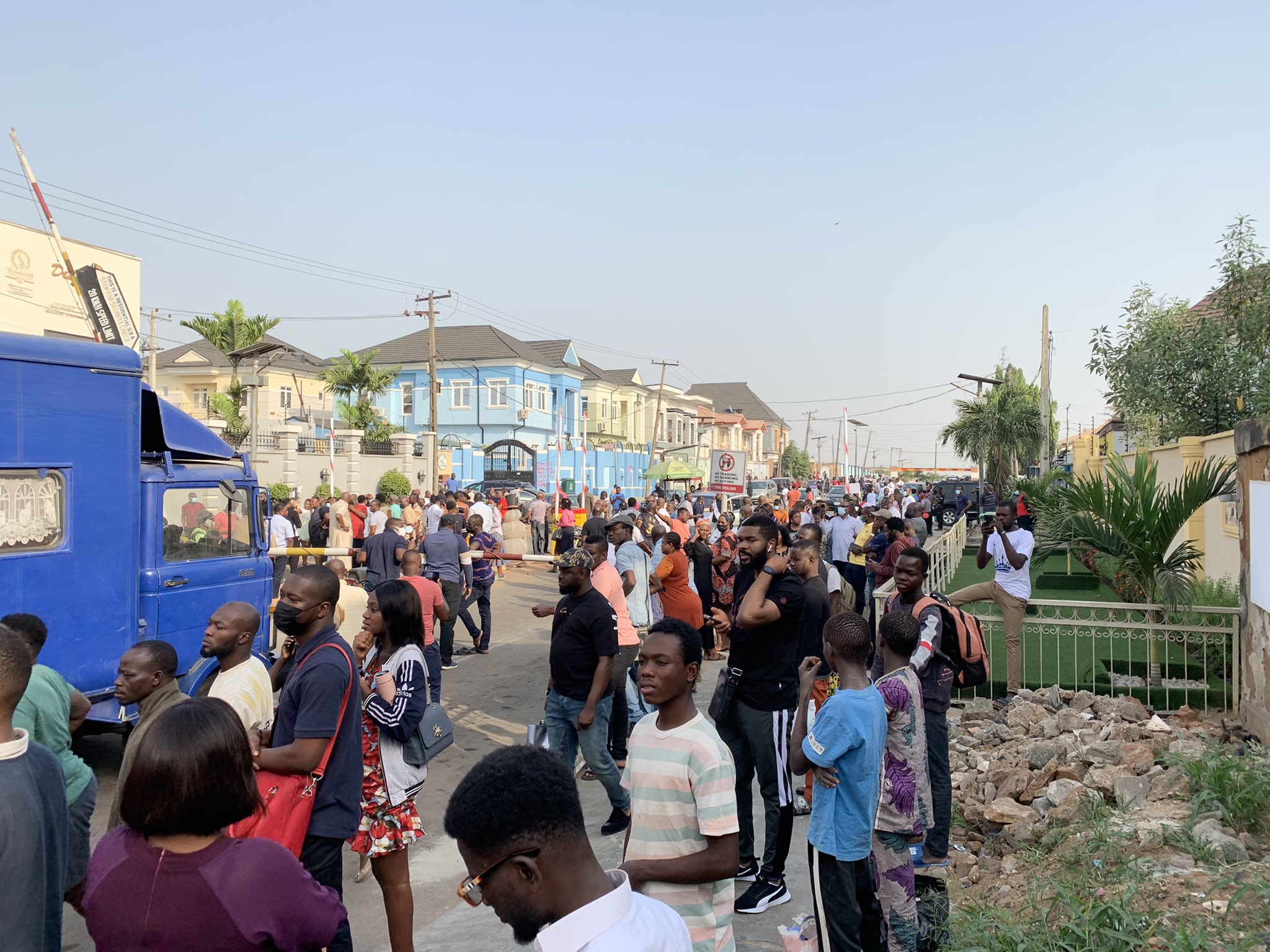 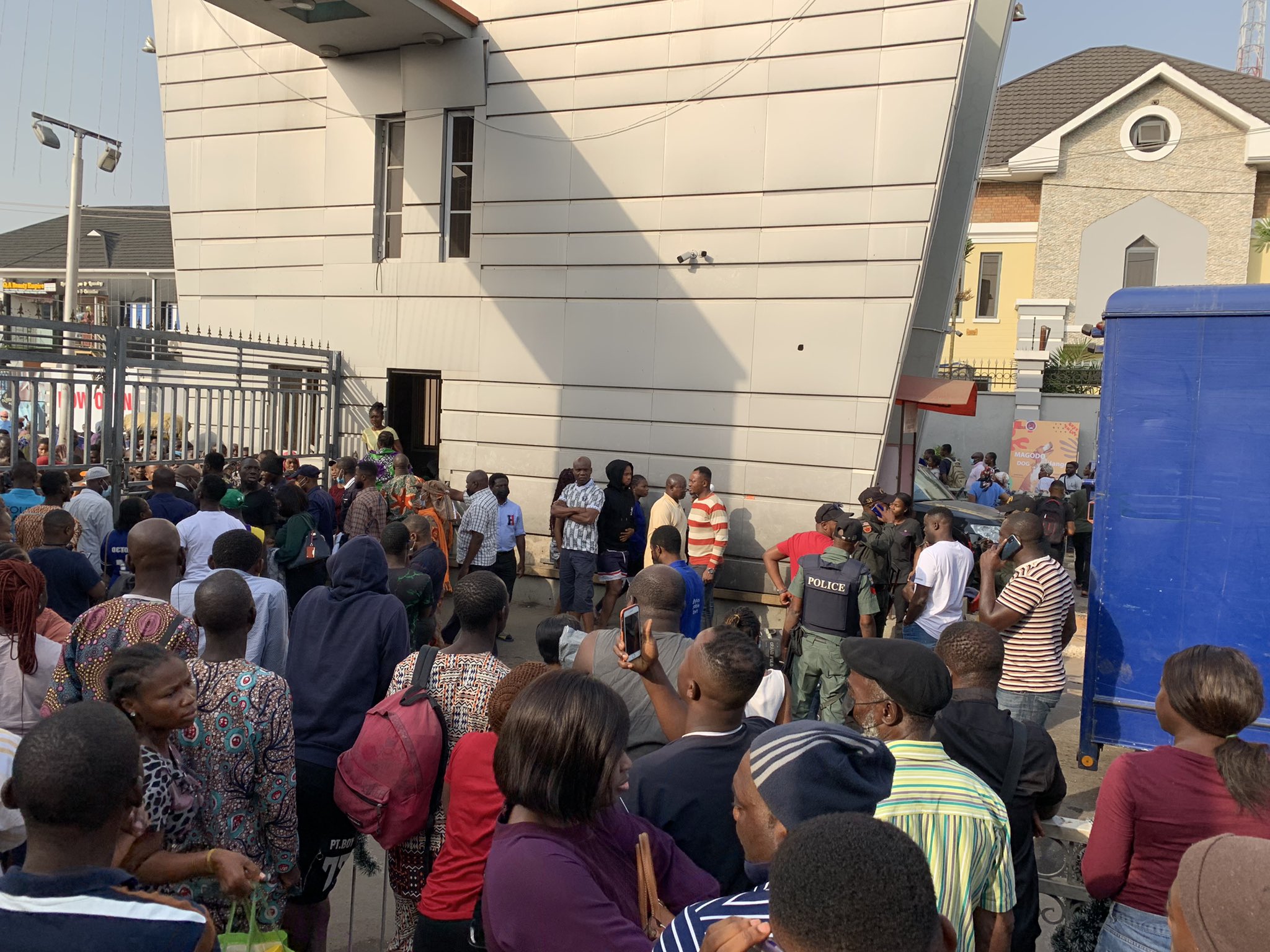 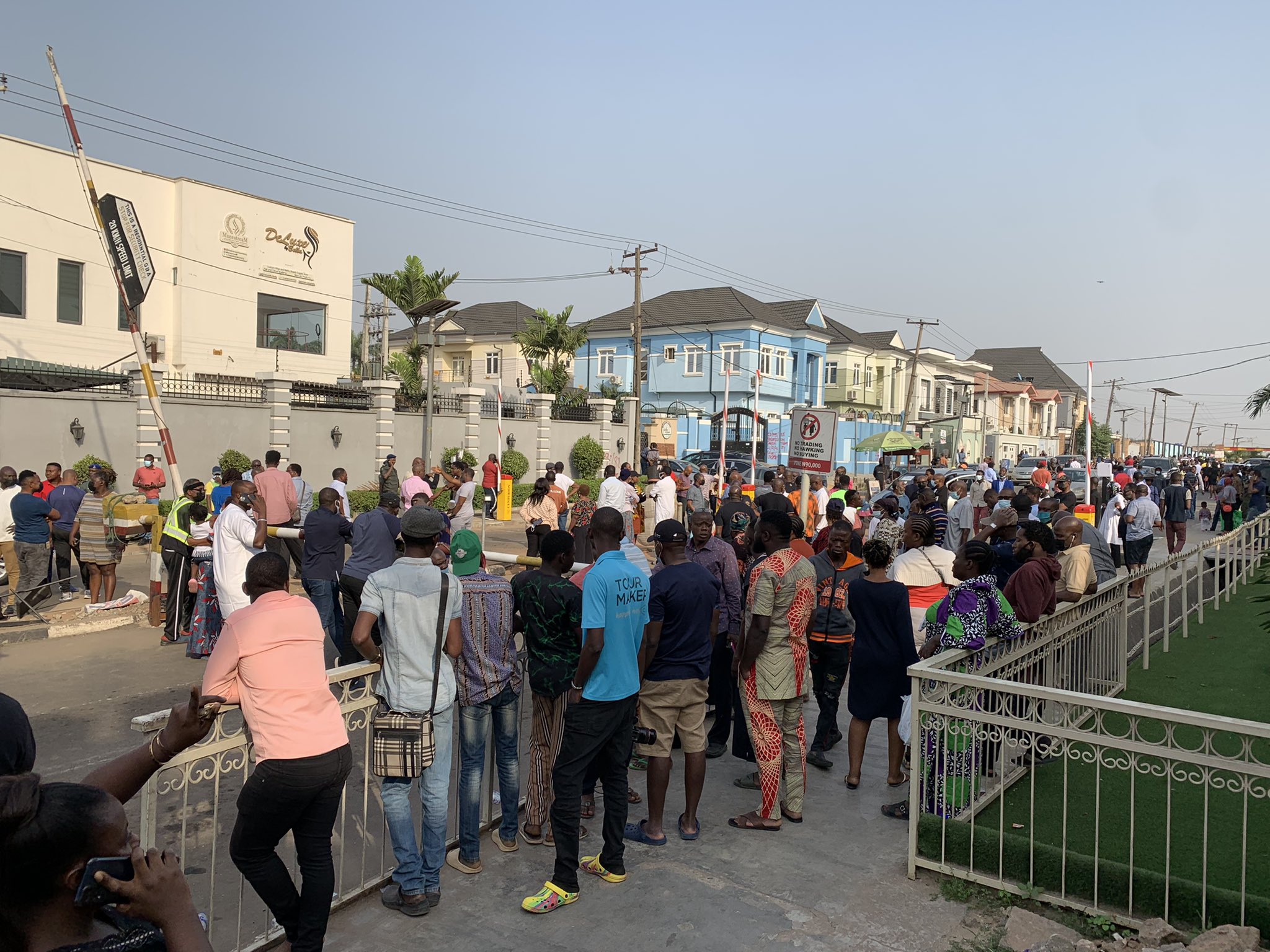 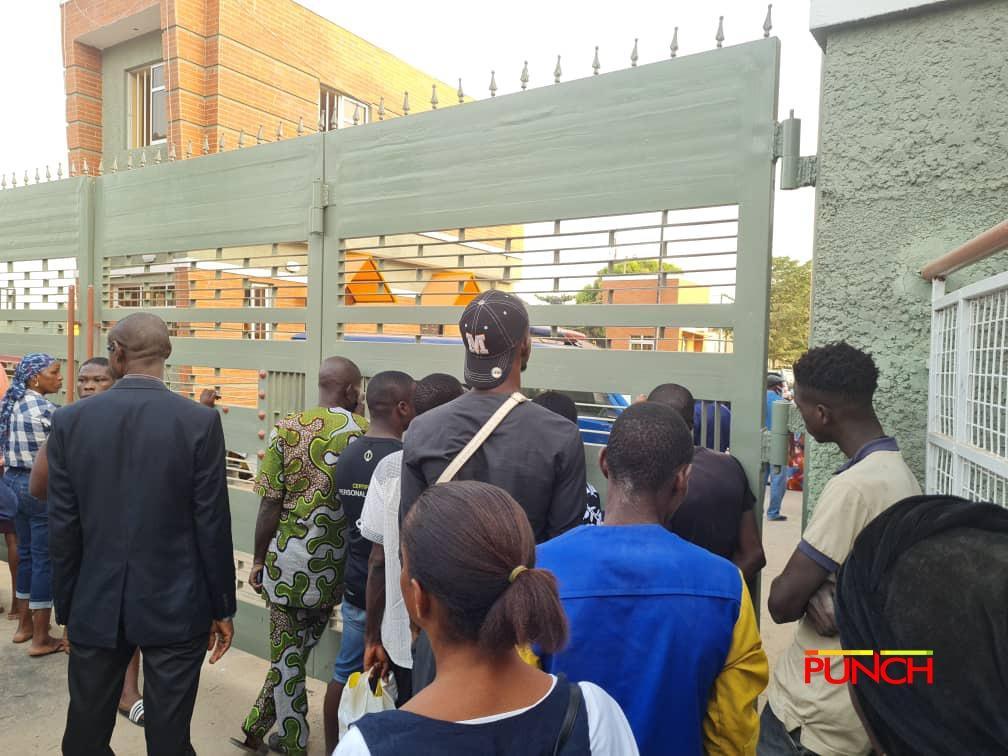 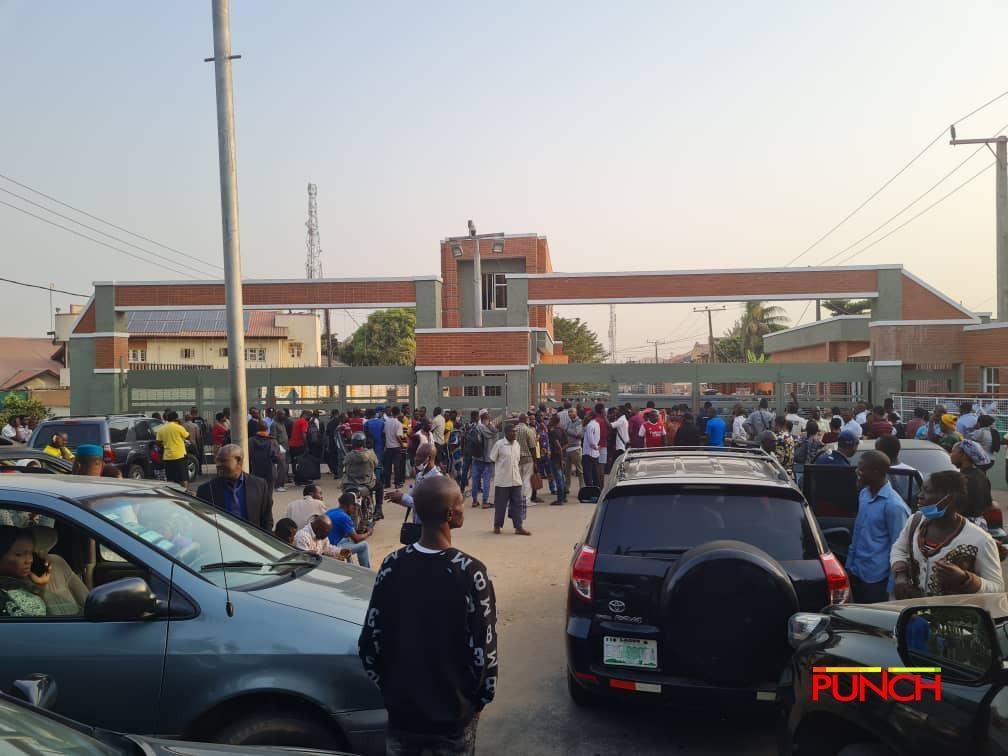 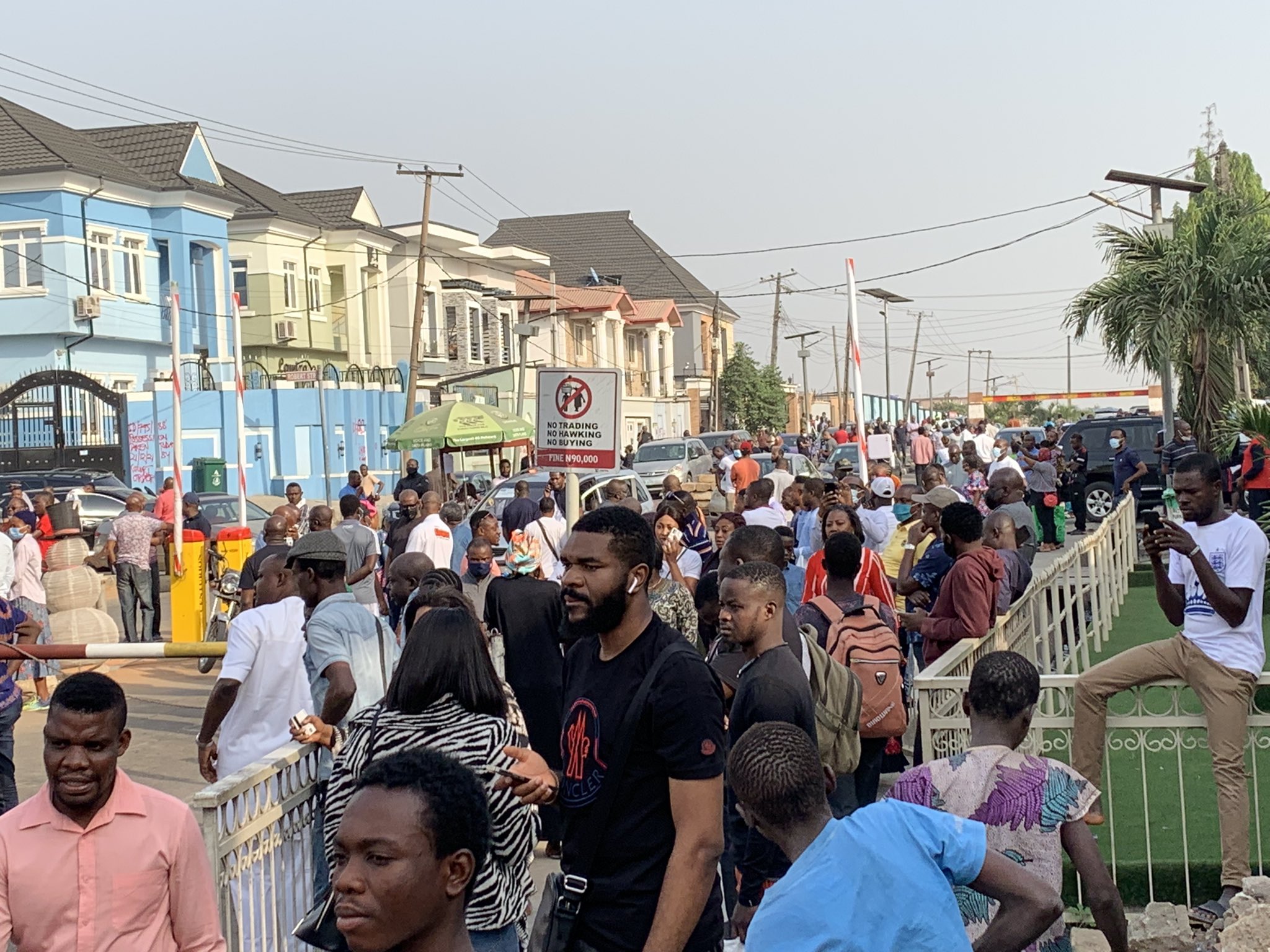 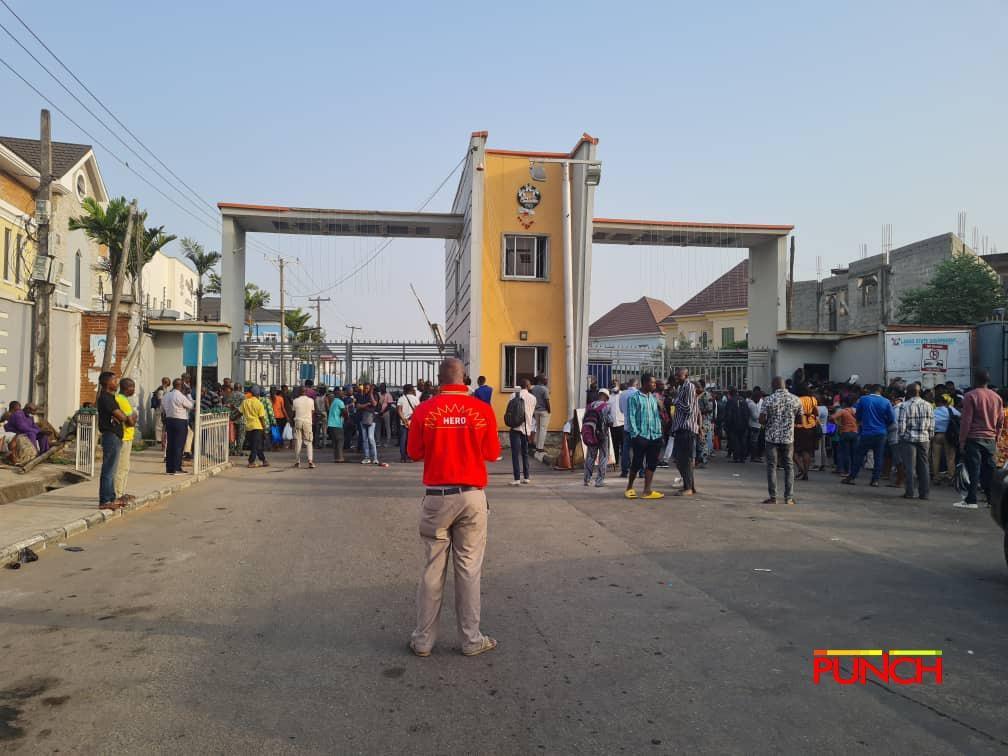 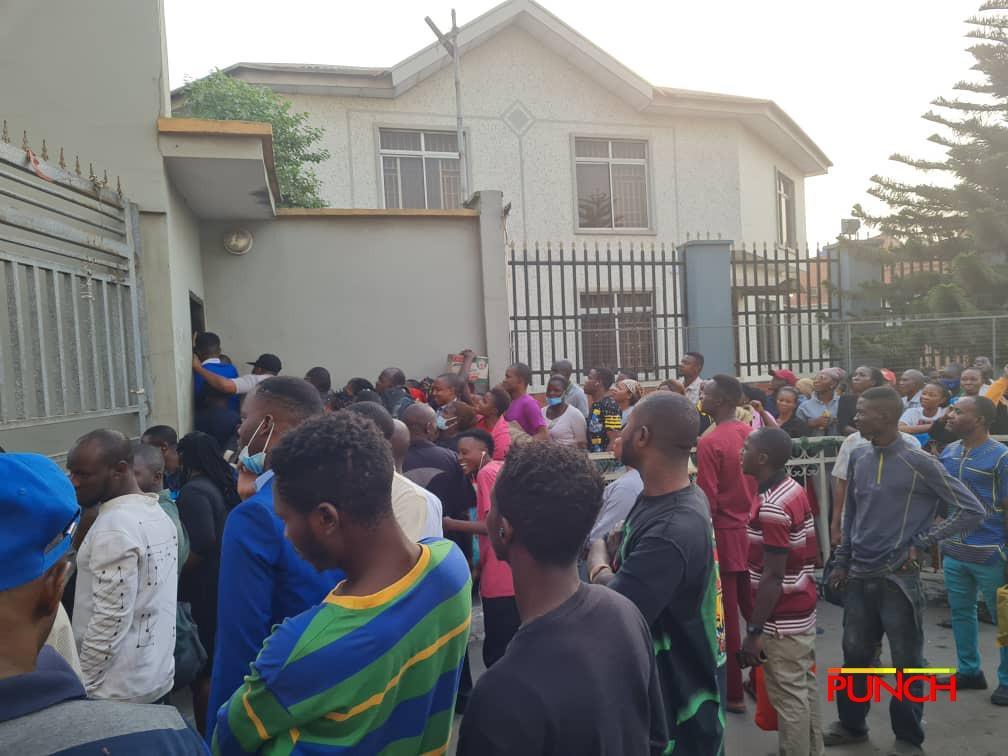 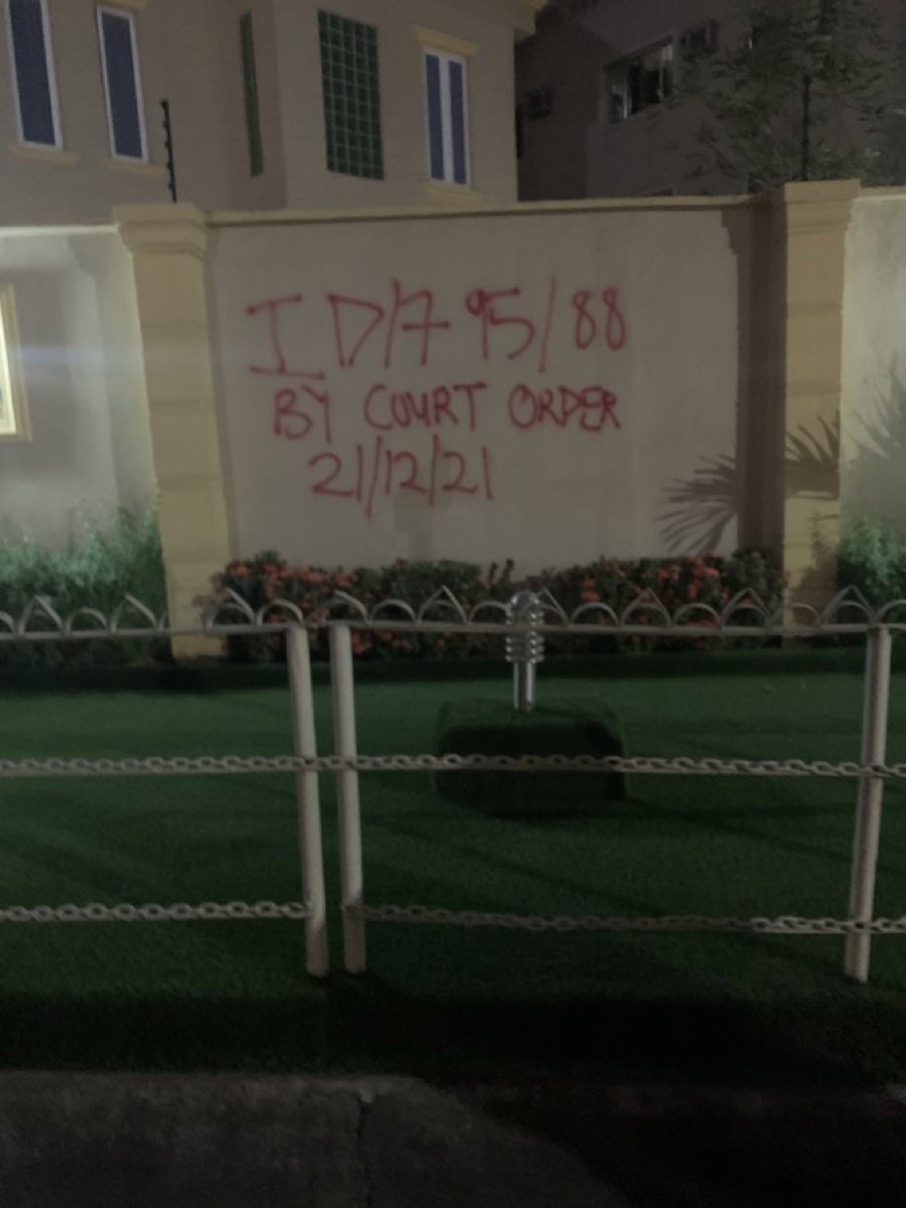