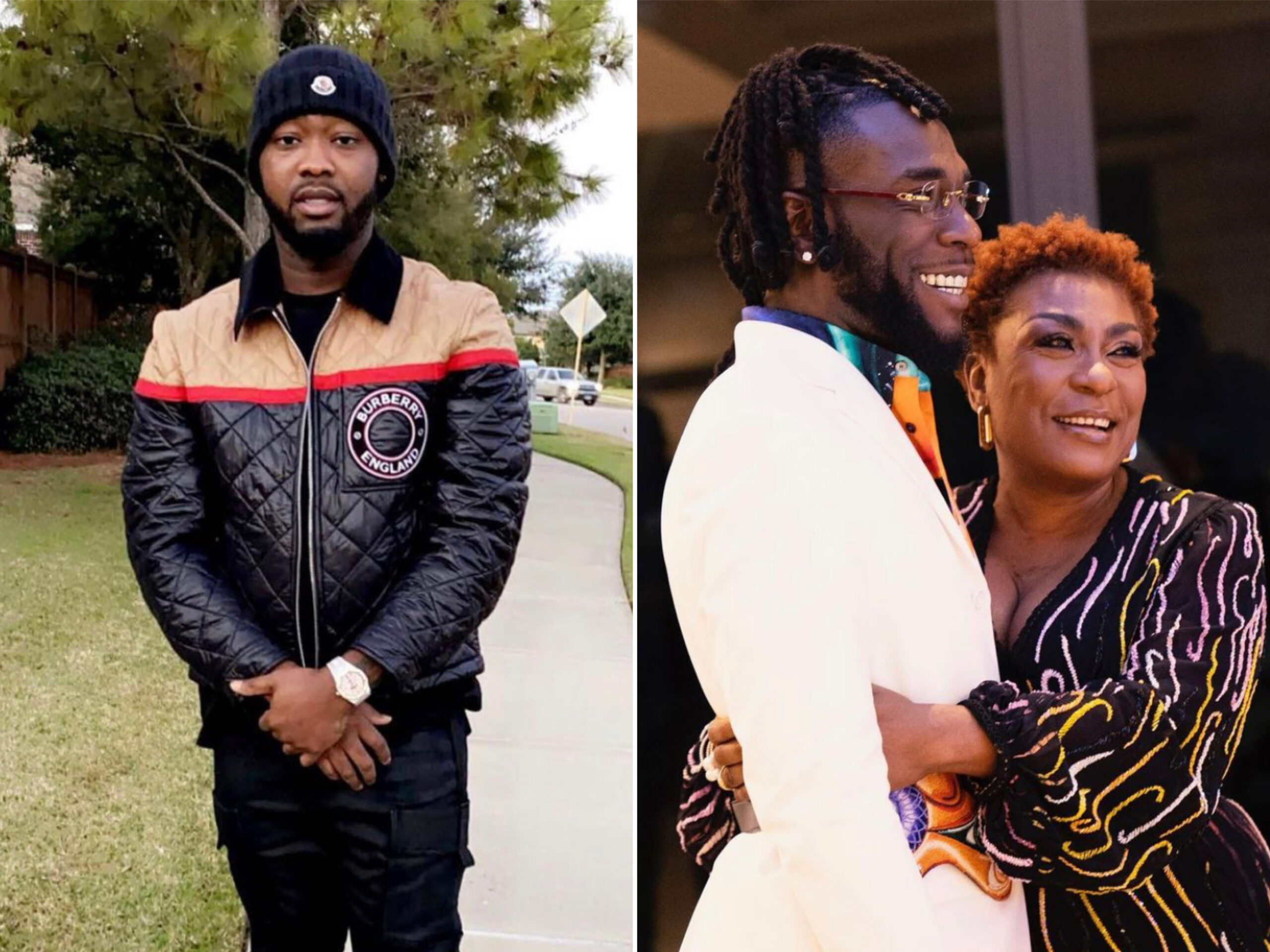 A United States-based promoter, Emmanuel Chinyere Uzoh, the owner of Gold Moola Entertainment, has called out Burna Boy and his mum, Bosu Ogulu over alleged extortion and is demanding N28m ($50,000).

Uzoh took to his company’s official Instagram account [@goldmoola] on Tuesday, November 2, 2021 to call out Grammy-winning superstar, and his mom, who also serves as his manager.

In his five-page story, Uzoh alleges that the singer collected a total of $50,000 from him, to perform at a show slated for October 30, 2021, in Houston, Texas, US, but never showed up.

@Burnaboygram and @thenamix. Bose Ogulu attempted to extort me form $10k. After the agreed sum was paid in full, she proceeded to ask for an additional $10k.

When I realized what was happening, I decided to pull from the show completely. I asked for the $15k balance that was paid on the night and they refused to return the money.

After hours of negotiations in the hotel lobby, the entire team snuck out of the hotel through the back exit to avoid us. 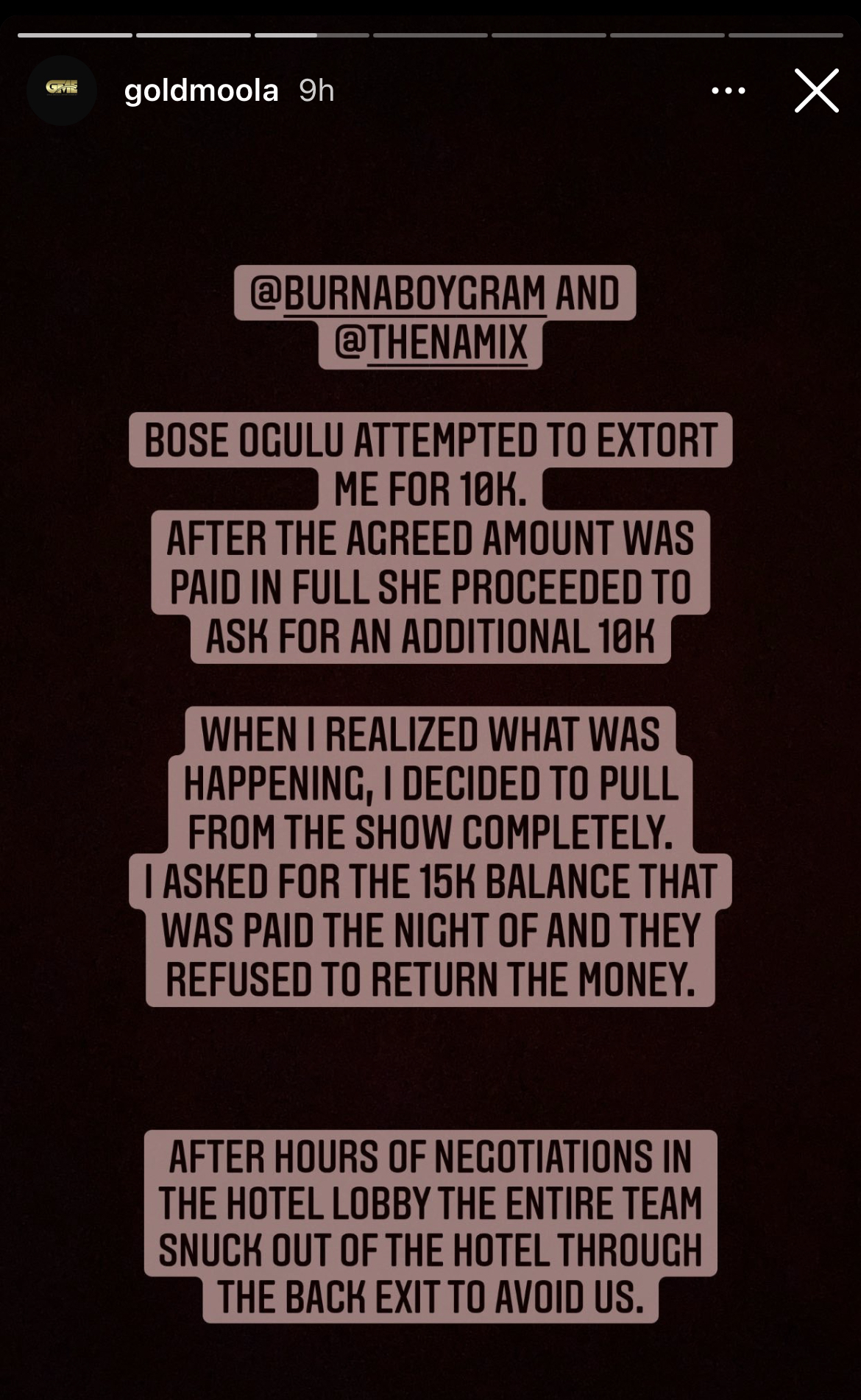 The deposit was paid on October 7th in Los Angeles, that was when he posted this cancelled flyer. After the balance was paid in full, he posted and confirmed his attendance. That’s when Bose told me that I had to pay another $10k before he comes downstairs. 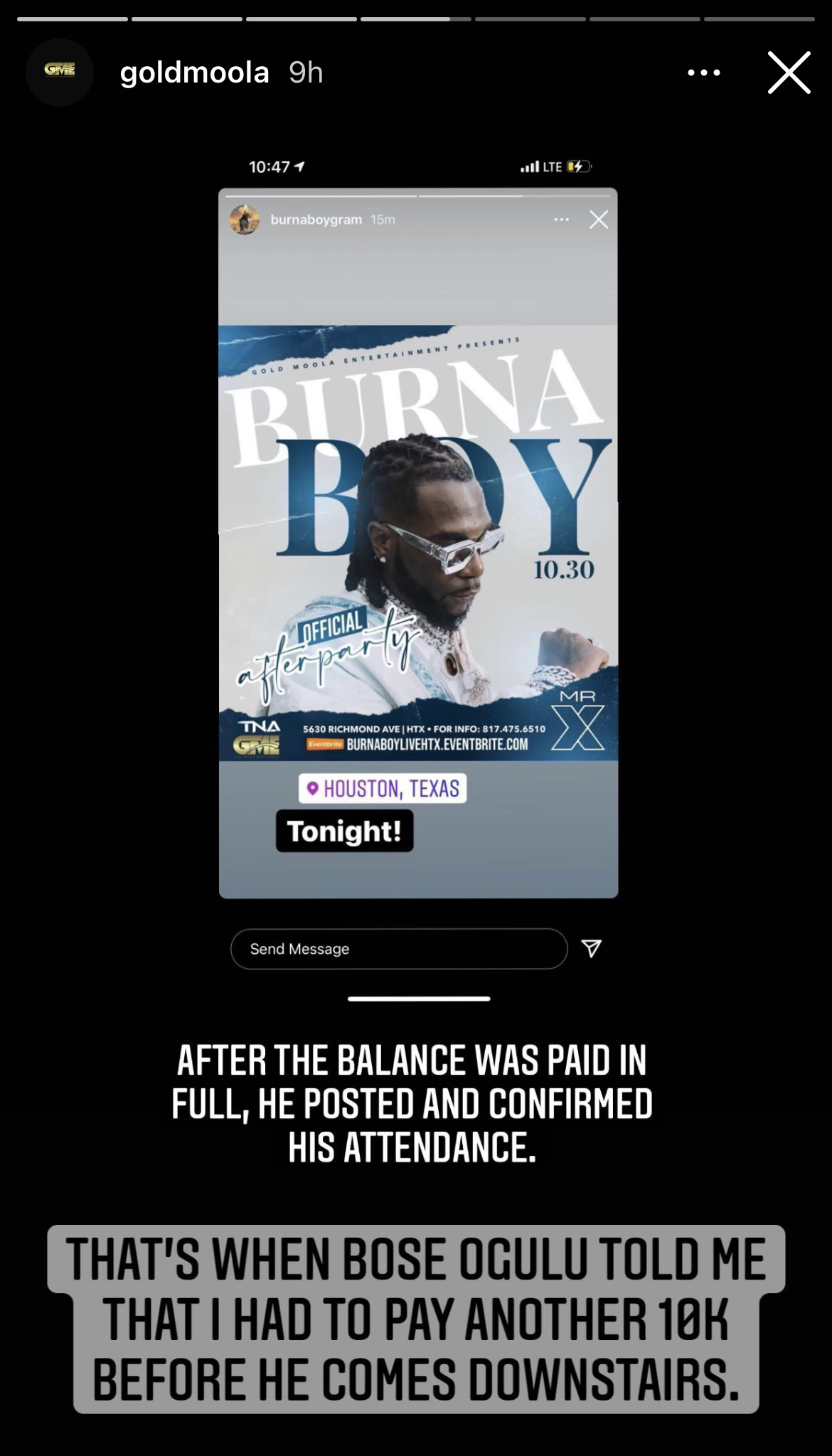 I realized that I was being extorted. At that point, I no longer wanted to move forward with the deal. This was around 1:10am. He was set to arrive at the club at 12:45am. Once I requested a refund of the $15,000 that was paid that night. 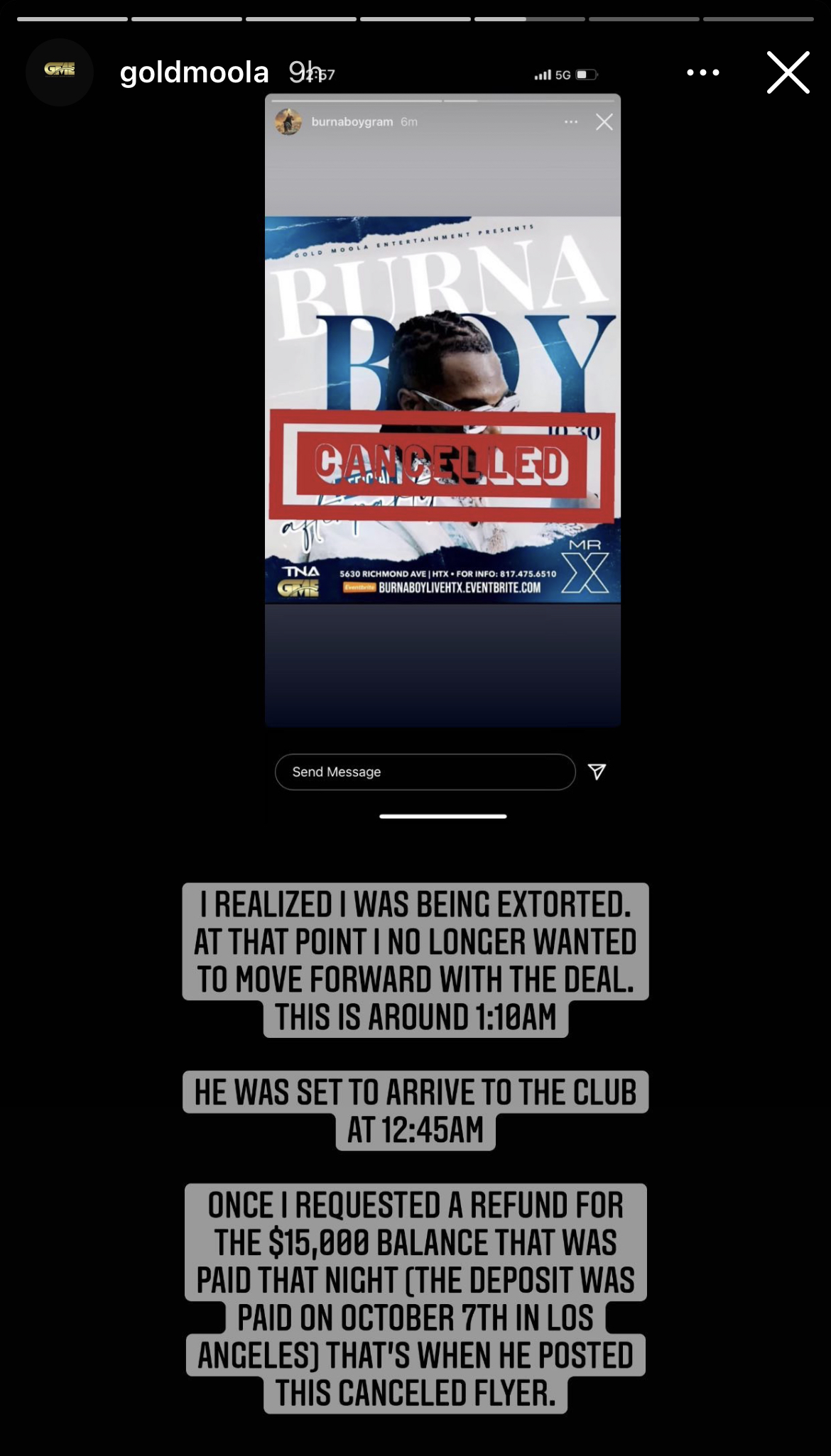 These are just the primary details of what happened on the 31st of October in Houston, Texas. Because I didn’t fall for the demands of extortion, I was robbed of over $50,000 and my name was left to be slandered in the city I love. We will allow the law to finish what they started. I pride myself on being a stand up guy, especially in the entertainment industry.

My only demand at this point is a refund. You were paid for a service that you didn’t complete. Be a stand up guy and kindly return my money @burnaboygram. 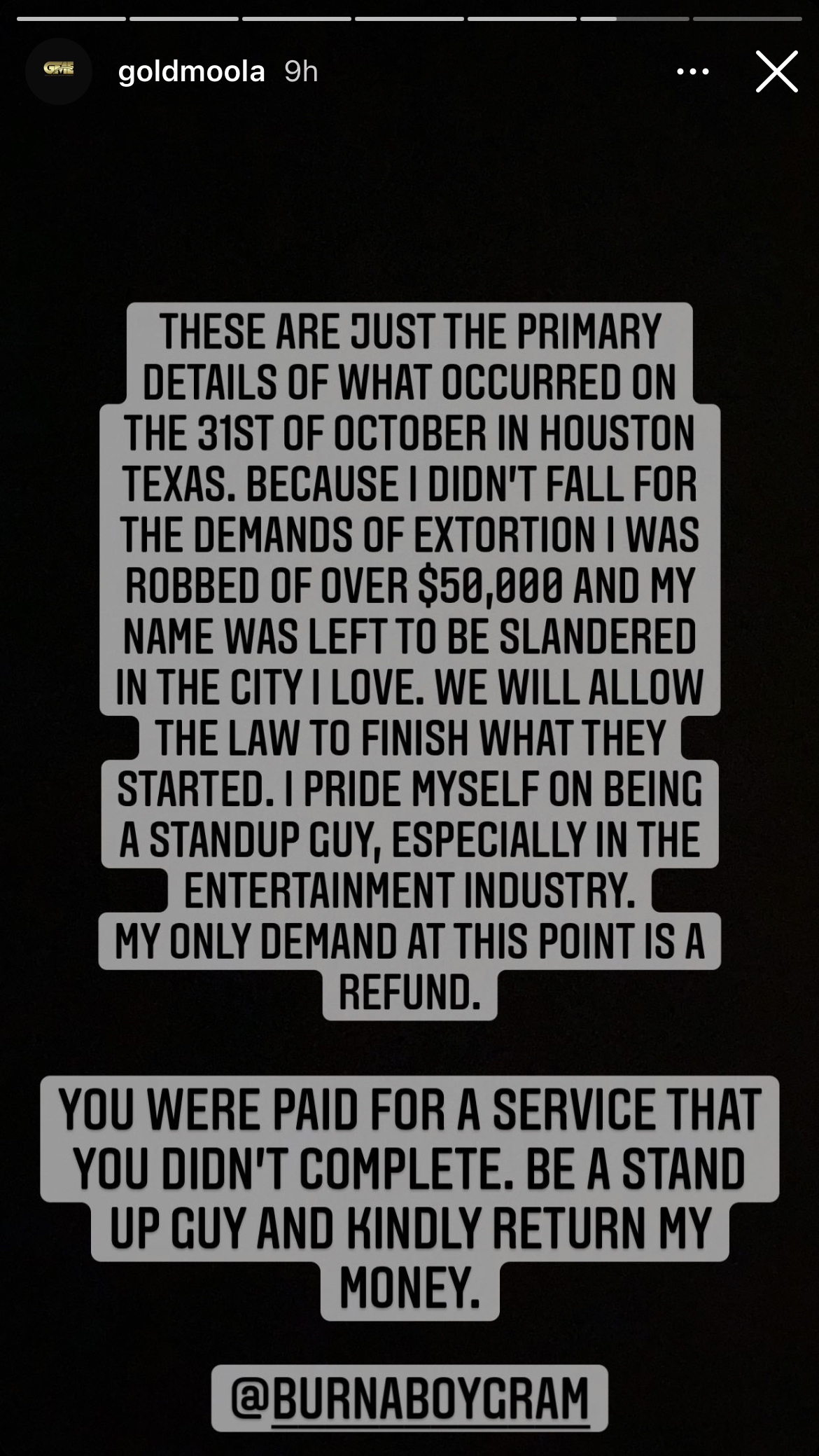 After opening my home to you and showing your people nothing but love… this is what our business endeavors have come to. 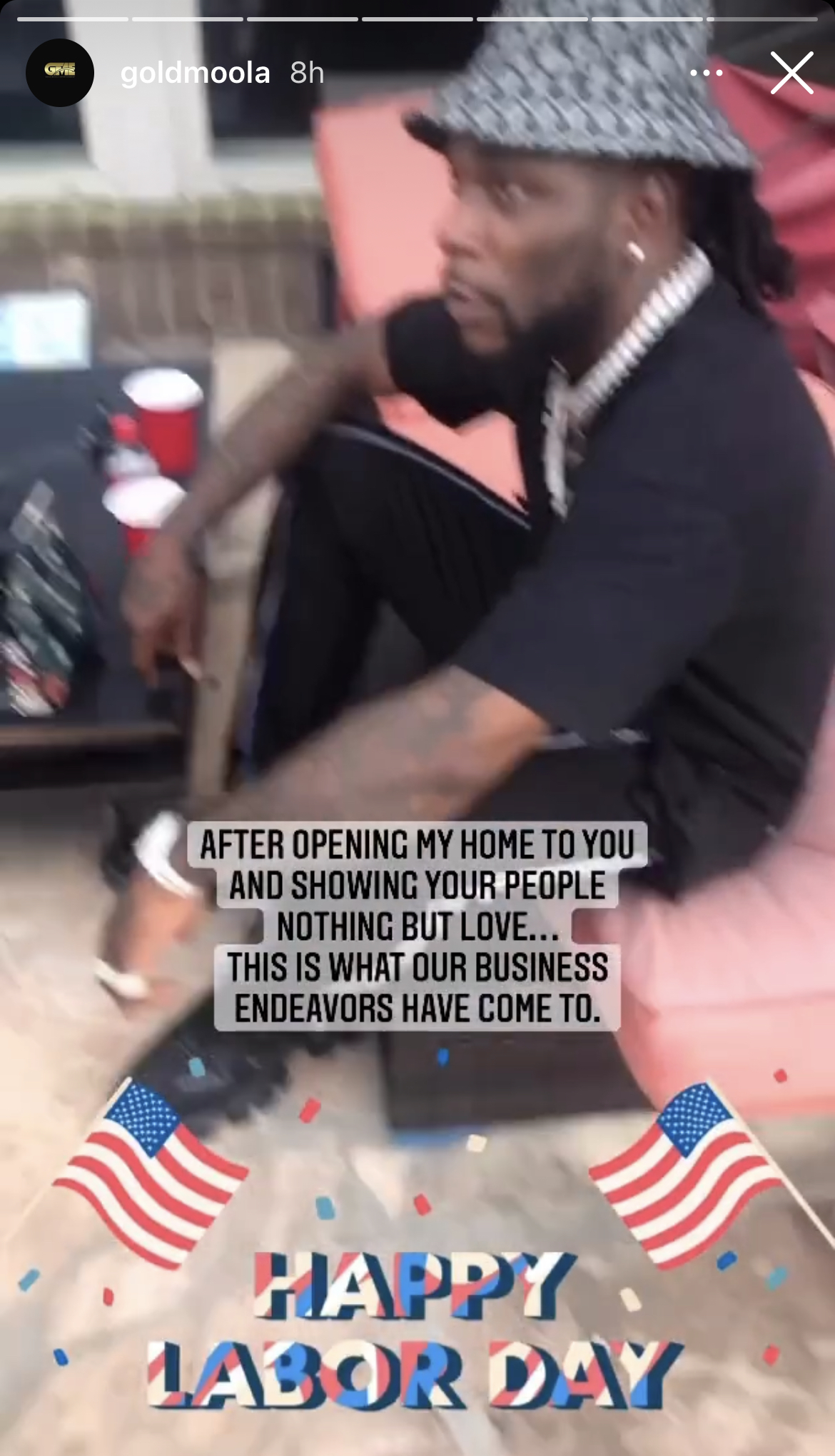 A few days before October 30, 2021, Burna Boy performed 33 songs in two hours at Hollywood Bowl, Nigeria’s first arena show in the US.

Meanwhile, Burna Boy, his mom and team are yet to react to the extortion allegation as at the time of filing this report.