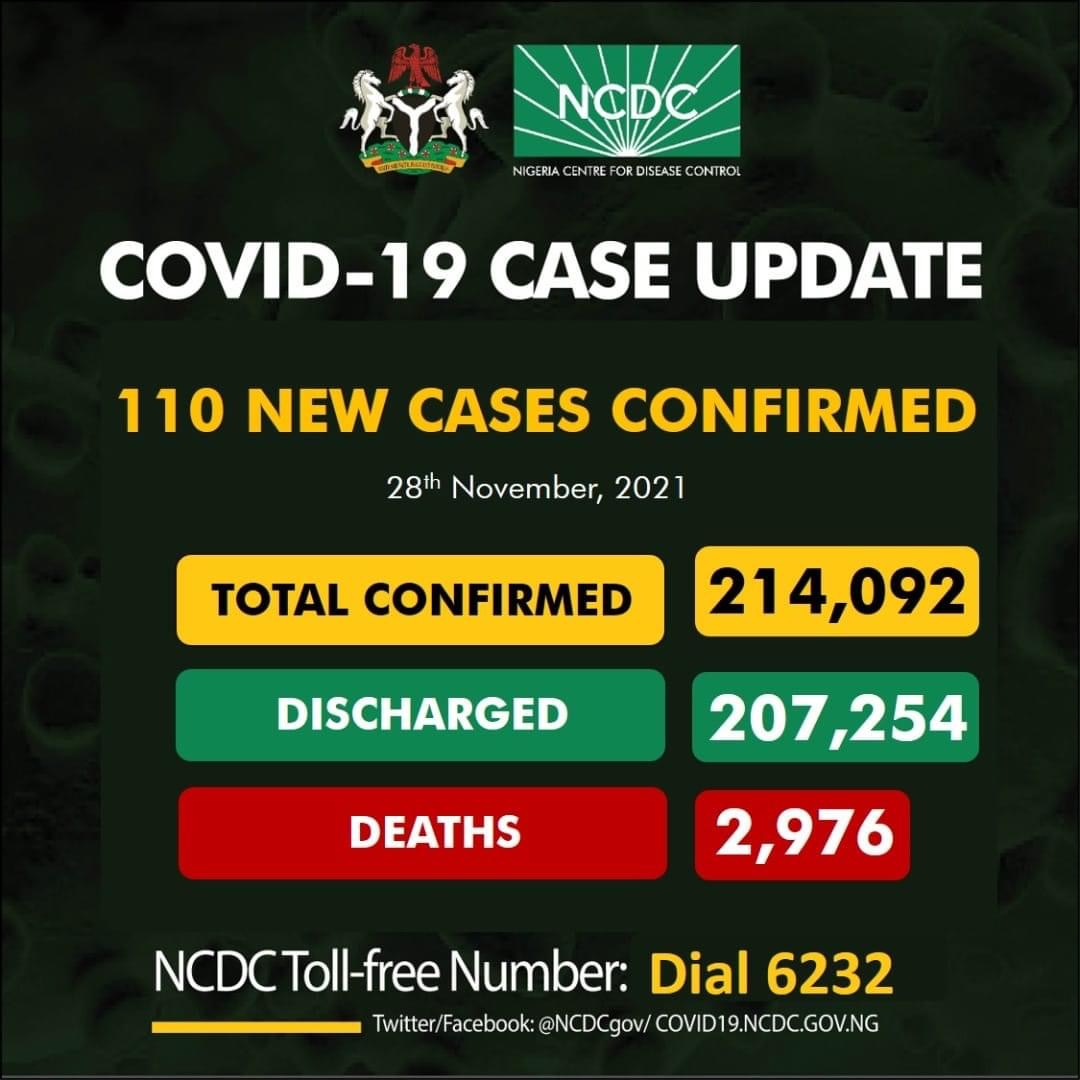 A total of 110 new cases of COVID-19 were reported on Sunday in the country, Nigeria Centre for Disease Control (NCDC) has said.

The health agency confirmed the figure in a Facebook post on Monday morning, amid the emergence of a new COVID-19 variant called Omicron in some countries.

It explained that the new cases were recorded in 11 states and the Federal Capital Territory (FCT), with Lagos reporting 27 more infections.

While Osun recorded two, NCDC revealed that a new case was reported in Ekiti, Gombe, and Zamfara states respectively.

This brings the total number of cases confirmed since the outbreak of the disease in Nigeria in February 2020 to 214,092.

Of the cases, the agency said a total of 207,254 people who tested positive for COVID-19 have recovered from the disease while 3,862 cases are active.

It stated that one more infected person lost the battle to the disease, bringing the nation’s death toll to 2,976.

As Nigerians worry over the emergence of the Omicron variant, the Federal Government said it was monitoring the situation.

“The Federal Ministry of Health (FMOH) and Nigeria Centre for Disease Control (NCDC) are aware of reports of a new COVID-19 variant – the B.1.1.529 lineage,” the NCDC Director-General, Dr Ifedayo Adetifa, said in a statement.

This SARS-CoV-2 variant has now been designated a variant of concern (VOC) and named; Omicron by the World Health Organisation (WHO) as advised by the independent Technical Advisory Group on SARS-CoV-2 Virus Evolution (TAG-VE).

WHO has also urged countries to enhance their surveillance and virus sequencing efforts to increase their understanding of the circulating variants. The FMOH and NCDC are monitoring emerging evidence on this new variant and its implication, to inform Nigeria’s response to the COVID-19 pandemic.

The variant, according to Adetifa, was first identified from testing done on November 9 in Botswana on travellers from West Africa.

It was reported to WHO on the identification of cases among a cluster of young unvaccinated people in South Africa on November 24.

NCDC chief said the variant has not been detected in Nigeria so far, stating that a number of cases have been reported in the United Kingdom, Israel, Botswana, Hong Kong, Germany, Belgium, and Italy among others.

NCDC continues to ensure daily review of surveillance data and uses this to inform public health decision making. Therefore, we urge all states to ensure that sample collection and testing are accessible, so that travellers, people with symptoms, or who have been exposed to COVID-19 cases get tested promptly.

NCDC, through the National Reference Laboratory (NRL) continues to coordinate genomic surveillance and other activities required for the detection of variants. The NCDC assumes global spread of this variant has occurred and it is prioritising sequencing of recently accrued samples from SARS-COV-2 positive travellers from all countries, especially those from countries that have reported the Omicron variant already.