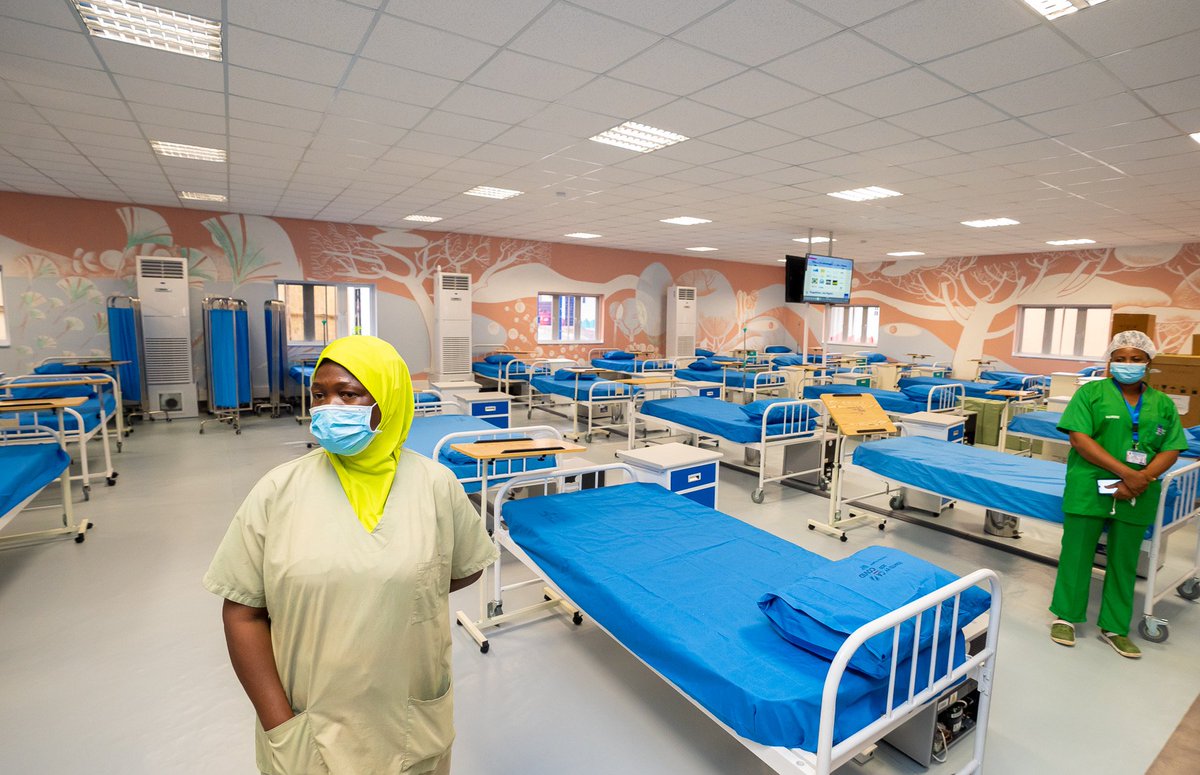 Lagos state government is reportedly owing health workers who volunteered to be part of Coalition Against COVID-19 (CACOVID) at Infectious Disease Hospital in Yaba a 3-month remuneration.

A member of the volunteer team simply identified as Doctor Damilare, made this known via his Twitter page on Thursday, November 18.

He explained that a call for frontline workers was called by Lagos State Ministry Of Health (LSMOH) in August to join in the fight against the 3rd wave of COVID-19 pandemic in the state.

Frontline workers were called by the Lagos’s state ministry of health in August to join fight against another surge in the covid 19 pandemic in Lagos state ……. a thread https://t.co/Dbc74XQIcj

Doctor Damilare revealed that they signed a 3-month contract which stated that the health workers will be compensated with a certain amount each month.

He added that volunteers were mandated not to engage in other jobs during the period of their contract.

At the IDH and INDO Isolation centers. We signed a contract for 3months which stated that we will be compensated with a certain amount each month for their service and were also told not to have any other jobs during the period. As such we depended on the hope of being paid.

However, according to the Doctor, payment for their services from August till when the contract ended on October 31 hasn’t been made, leaving volunteers stranded.

From then till now when the contract ended on October 31st 2021, we have not been paid a single dime since they started. Who did they offend, we worked tirelessly all through even till the end of the contract but they did not deem it fit to pay us.

Below is a statement from an epidemiologist with LSMOH, Dr Ismail Abdus-Salam informing the volunteers of the completion of their contract in October and giving an assurance to pay their remuneration. 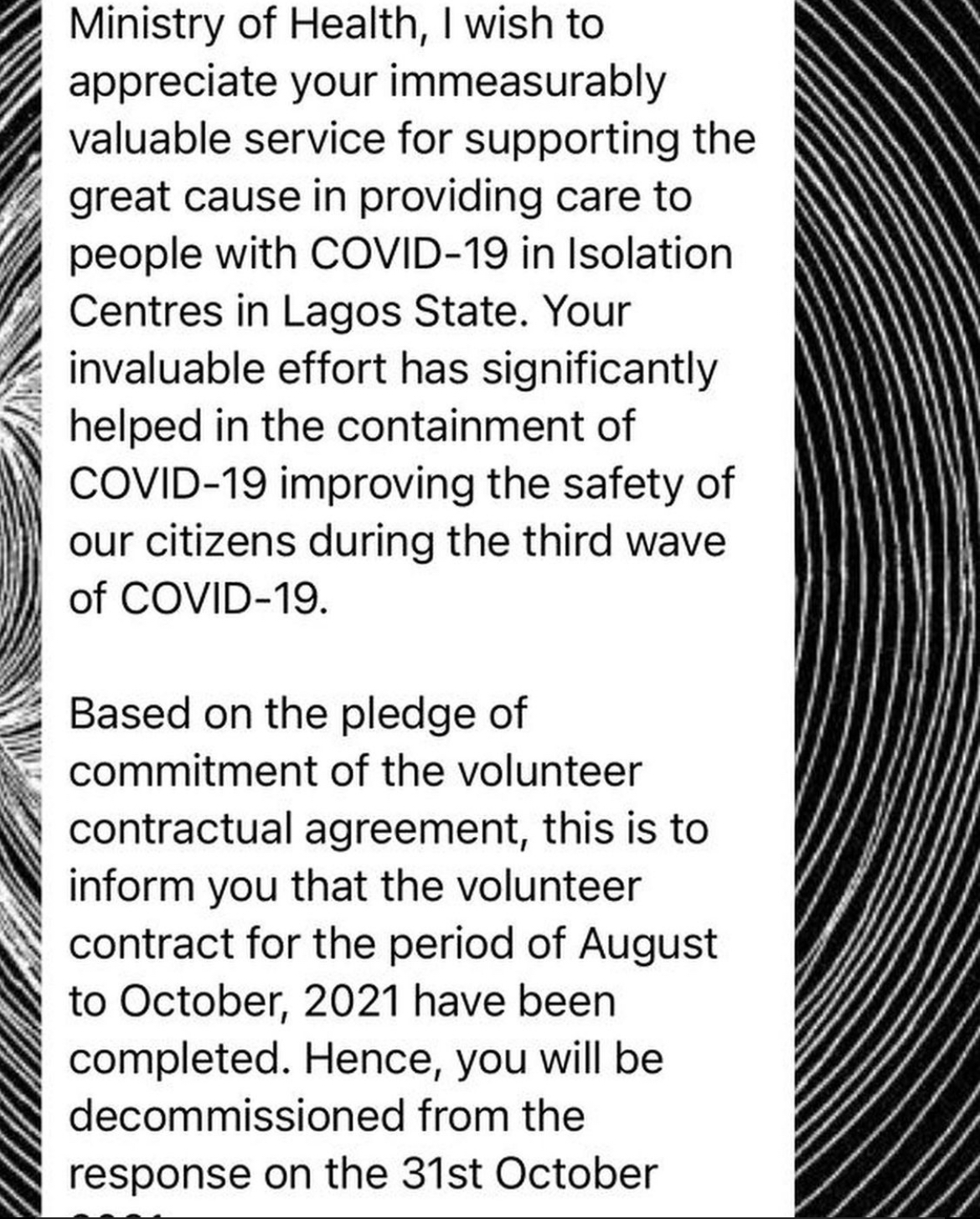 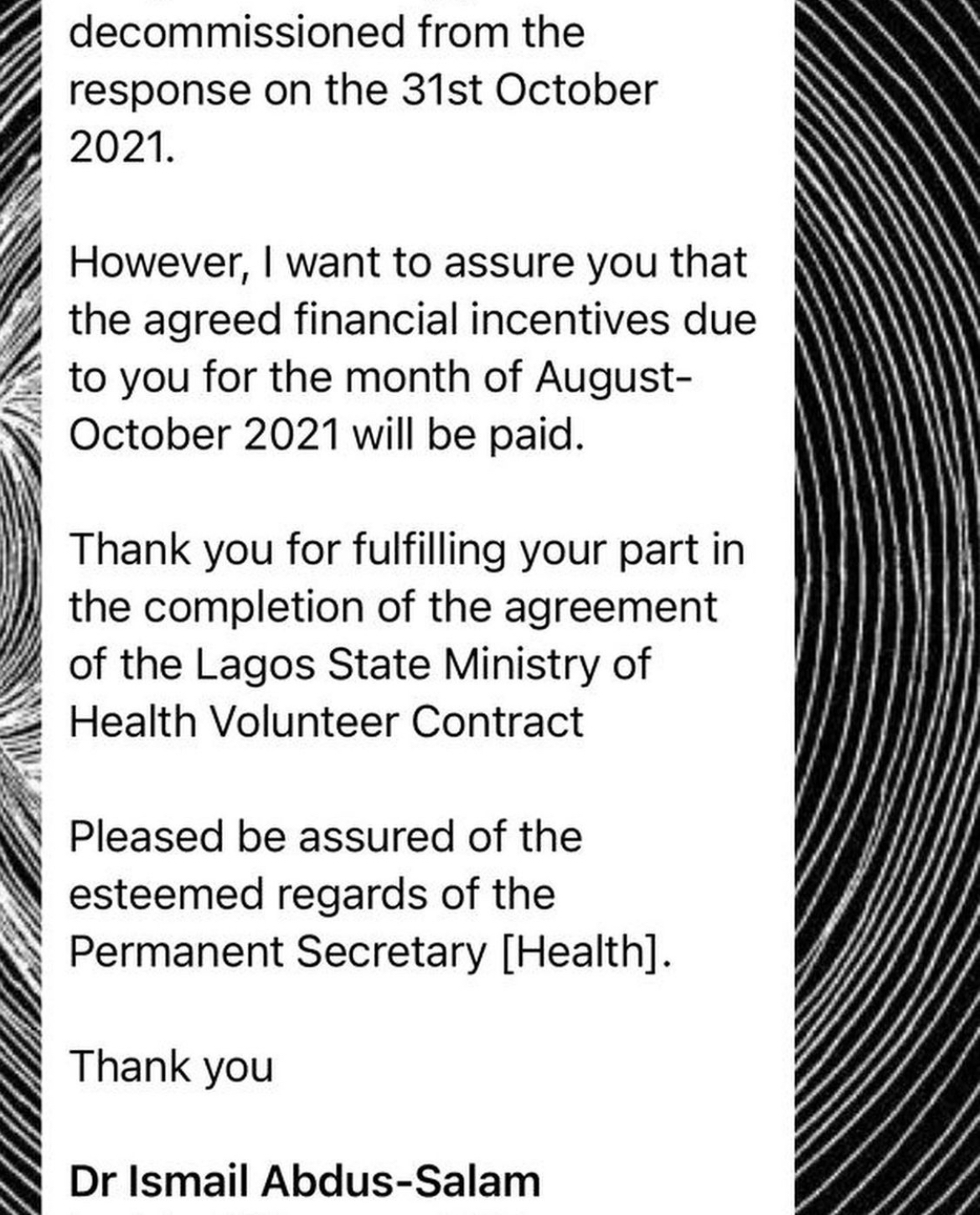 Speaking further, Dr. Damilare slammed Lagos state government for going back on their work, organising concerts and engaging in other activities while owing frontline health workers who risk their lives for COVID-19 patients.

The government meant to protect us has failed us.

According to a document which surfaced online, the aggrieved health workers sent a letter to Lagos state epidemiologist emergency operations committee of Infectious Disease Hospital in Yaba on Friday, November 12 demanding their pay.

REMINDER ON NON-FULFILMENT OF CONTRACT

We, the CA-COVID volunteers of IDH Yaba for the months beginning August and ending
October 2021, hereby write to remind you of our current plight caused by the non payment of our salaries for the medical services provided over said period.

We were made to sign documents which included NDAs precluding us from divulging our short-term contracts as CA-COVID volunteers over the period of our service to persons or organizations outside of the agreeing parties. The agreement was premised on the payment of a net salary of about 335,000 NGN monthly until our contracts were terminated.

Unfortunately not only were we not paid our salaries monthly as stated in our contracts, we also have not been paid up until the time of writing this letter.This, we believe, essentially negates the NDA signed at the beginning of our contracts.

We therefore write to impress on you the need for the fulfilment, with immediate effect, of said contract as agreed and signed with you, and to stress that definitive public and media-driven measures would be sought to push our righteous course if our salaries are not paid by the morning of 17-11-2021.

Thank you for your anticipated audience and prompt response. 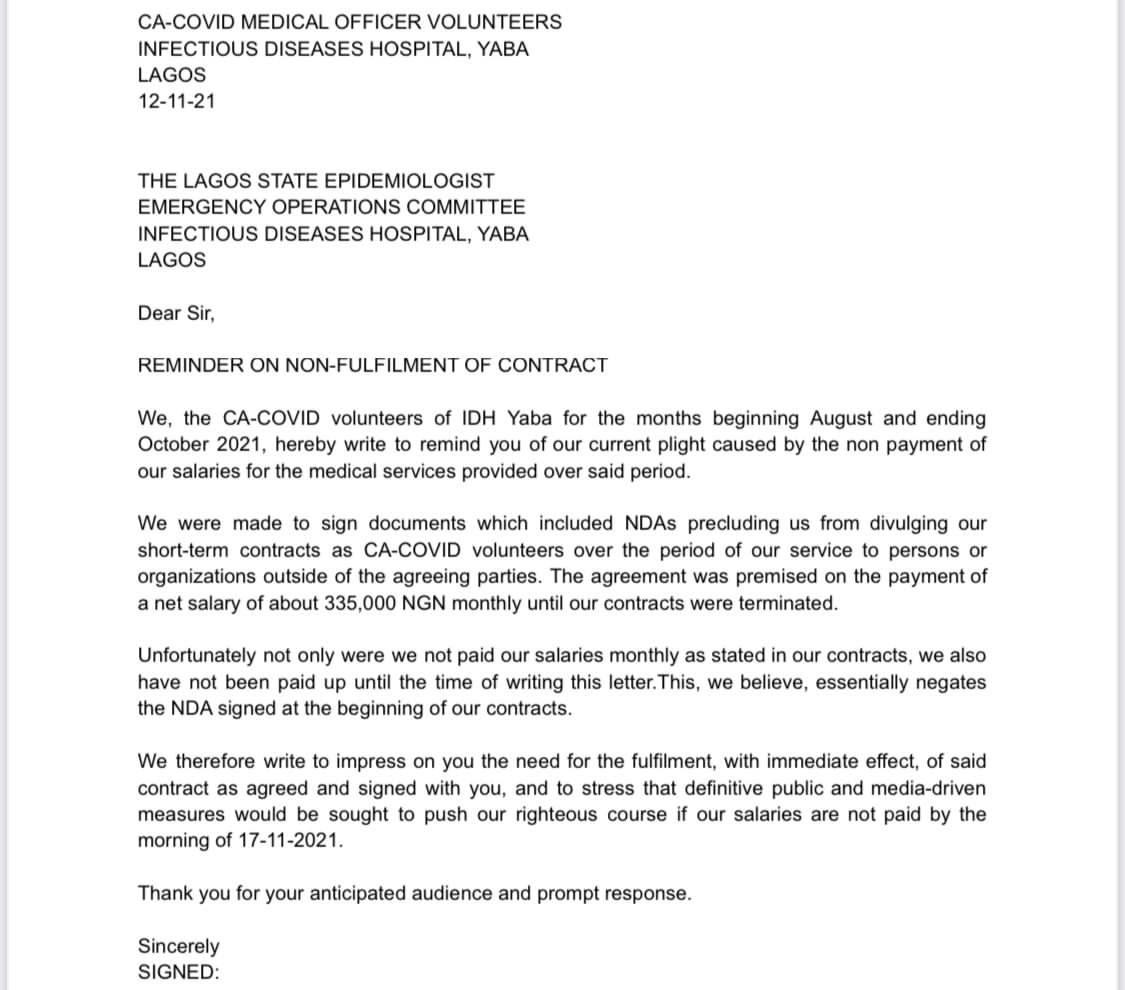 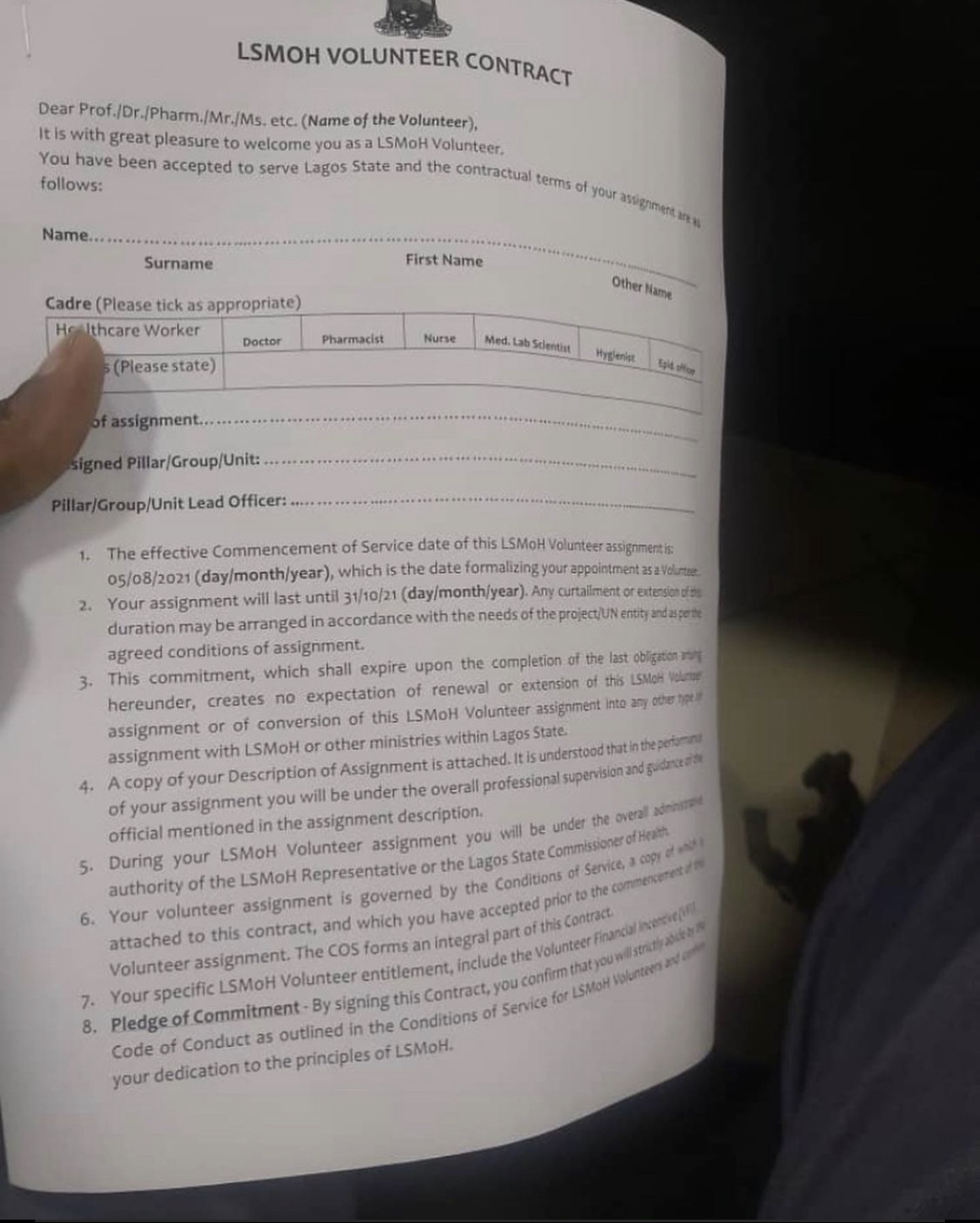 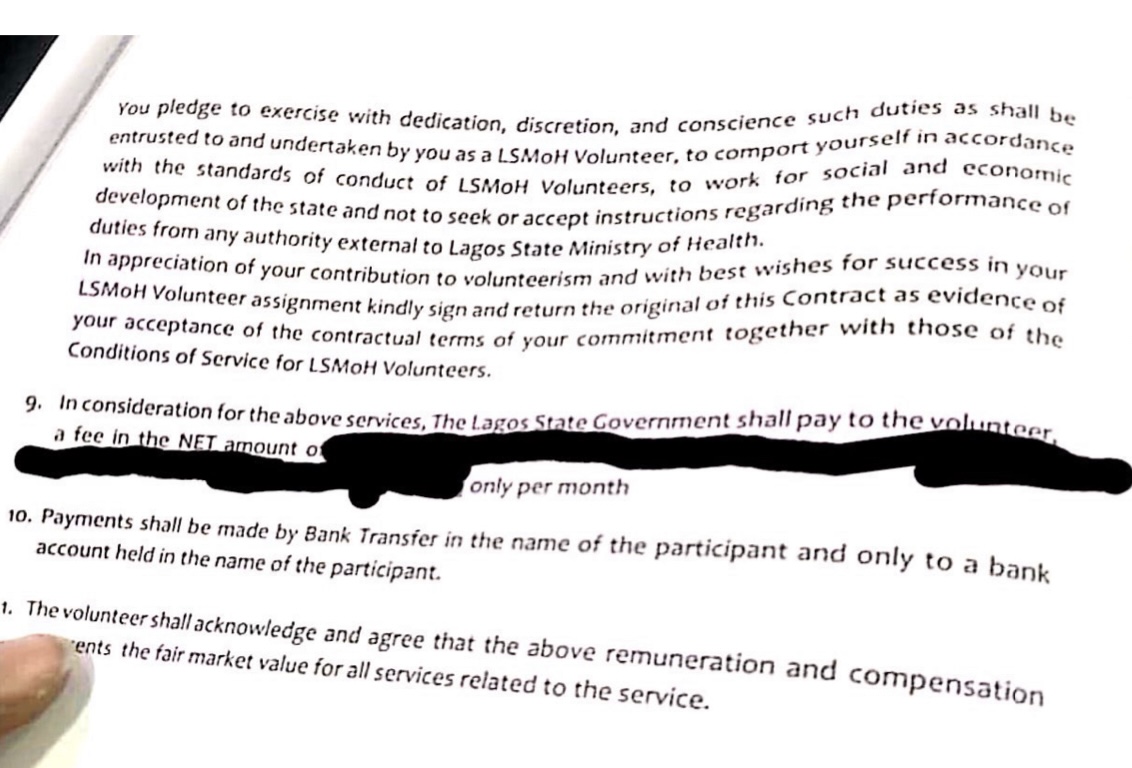 According to the document, payment was to be made monthly and to a designated bank account in the participant’s name.

Meanwhile, as at the time of filing this report, Lagos state government and the ministry of health are yet to react to the allegation.