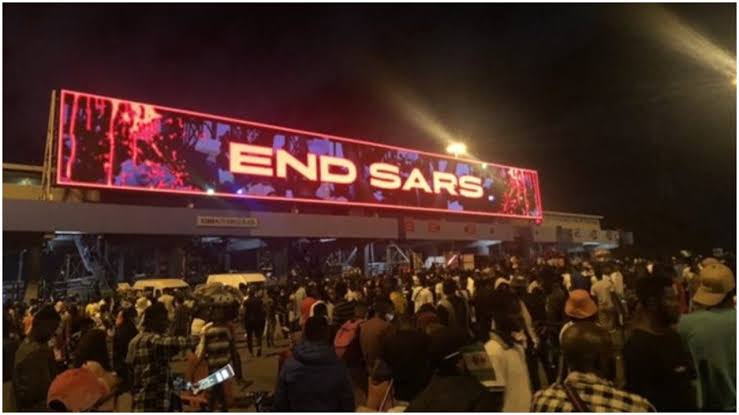 Judicial Panel of Inquiry on Restitution for Victims of SARS Related Abuses and other matters has said that atrocious killing of unarmed protesters at Lekki toll gate on the night of October 20, 2020, can be equated to a ‘massacre’ in context.

The Justice Doris Okuwobi-led panel made this known in its report submitted to Lagos State Government on Monday, November 15.

In the report, titled, ‘Report Of Lekki Incident Investigation Of 20th October 2020’, a copy of which was sighted by our correspondent, the panel said at least 48 protesters were either shot dead, injured with bullets wounds or assaulted by soldiers who stormed Lekki toll gate on October 20, 2020.

Although the Lagos State Government has not released the report, civil advocacy group, Enough is Enough Nigeria, has, ThePunch reports.

The atrocious maiming and killing of unarmed, helpless and unresisting protesters, while sitting on the floor and waving their Nigerian flags, while singing the National Anthem can be equated to a ‘massacre’ in context.

It was alleged and corroborated that the soldiers had their vans parked at the Lekki Toll Gate and removed as many bodies and corpses of the fallen protesters which they took away with their vans.

In its recommendations, the panel emphasised that all those involved in the attack on youths should be made to face disciplinary measures.

The Panel recommends that the Lekki Toll Plaza be made a memorial site for ENDSARS Protest: By renaming to ‘ENDSARS TOLLGATE’.

The panel recommends that October 20th of every year, the day is made a ‘Toll Free Day’ at the Lekki Toll Gate as long as the tollgate exists.

That Oct 20th of every year be made EndSARS day Nationally for the remembrance of our falling youth.

That for the purpose of restitution, healing and reconciliation the federal Government needs to publicly apologize to the youth for abruptly undermining the protest with their state actors.

The Government should do all it can to bridge the gap of distrust with the Youth.

A monument memorializing the lives lost and those injured at the Lekki Toll Gate with the names inscribed on the Monument.

The panel report negates the consistent claim by the Federal Government of Nigeria that there was no massacre at the toll gate, a focal gathering point during last year’s nationwide demonstration against extrajudicial killings and police brutality by operatives of the now-defunct Special Anti-Robbery Squad of the Nigeria Police Force.

Minister of Information, Lai Mohammed, had staunchly maintained that the Lekki incident was a “massacre without bodies” and had threatened to sue Cable News Network and another international media house that claimed otherwise.