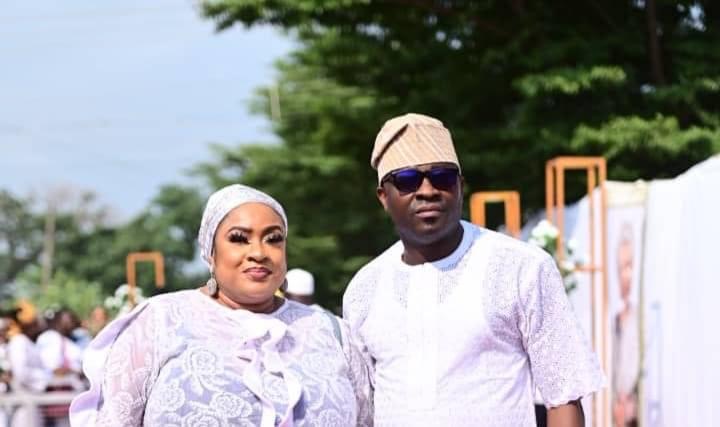 Olukayode Salako, husband of Nollywood actress, Foluke Daramola-Salako, has dismissed rumours that their marriage has crashed.

In a lengthy post shared on his Facebook page on Tuesday evening, Olukayode stated that he and Foluke still share the same bedroom and that rumours of their failed marriage is untrue.

He said the rumours are the handiwork of ‘silly merchants of beer parlor and pepper soup joint’ journalists who are bent on breaking their marriage with fake news.

Mr Salako even revealed that they would be celebrating their 10th wedding anniversary in four months’ time.

He pointed out that they, just like every other one, experience some marital challenges but stated that it hasn’t lead them to breaking up, as rumoured in recent times.

Foluke Daramola Salako and I still share the same bedroom. In fact, we woke up on that same bed this morning. Let those silly merchants of beer parlor and pepper soup joint journalism continue to write their rubbish about us. They have been doing it since we got married.

They have started circulating another false and unfounded silly-gossip information about our marriage this time again.

We will invite them to come and see how okay we are and how good we shall continue to be together in it.

They want it to break by force. They have tried and tried it for the 10 years through so many media blackmail means and sources, but little do they know that we have decided to continue to be unbreakable.

Foluke Daramola Salako and Olukayode Salako are good and are still okay together.

The marriage is still intact and the purpose for our being together is still waxing stronger.

What they want the public to believe is that Foluke is irresponsible and no longer good for me, but I say No! She is still my wife and shall continue to remain so.

Or, rather, because I am now involved in the game of politics, I should begin to experience the share of the image battering propaganda, which is one of the tools the opponents and enemies use to destroy images of promising political actors in the social adventure.

I sill maintain that Foluke Daramola is a very, very responsible woman, who I can beat my chest that she does not mess around, because their is no evidence of it yet in my archive. And, that is why we still share the same bedroom together up till this moment.

Speaking about challenges in the marriage, the actress’ husband explained;

There is no marriage without its own peculiarity, challenges and occasional issues. Obviously, ours too cannot be an exception.

Yes! There are issues sometimes and there will always be, but those issues have never been strong enough to break us apart and would never be strong at all to ever break us apart, except the two of us decide we want to let it go against the will of our God for our togetherness.

I, therefore, urge the public to, please, disregard and discountenace the contents of the latest jargons, those crudely minded and misguided media people are pushing out again to insult the sensibilities and intelligence of naive and unsuspecting Nigerians about my marriage to Foluke this time again.

There is no truth in all that have been stupidly articulated and making the rounds in the jargons.

It is only an insane man, who would push out such a crudely and wickedly articulated image damaging rubbish against a woman, who has committed so much to the survival of her home and that of the socio-economic and political well being of her man in the 10 years we have been together.

As I told some journalists, who called me to find out the truth on the prevalent matter this morning, even if Foluke as a wife, were to be my best enemy, I will never, ever do that to the celebrityhood and socio-marital image I have also contributed to build and polish for the 10 years we have been living and doing so many things together.

I am never that kind of a man, who would do such a thing to the same woman, I still share the same bedroom with for any reason in the world.

What I think happened was that, one of our haters just sat down in the corners of his/her bedroom and concorted all the rubbish in his/her head and pushed it to the public to unfairly malign the image of our marriage as usual.

There is no truth in all that are being circulated about us this time again.

Foluke is a very good and responsible woman. The two of us are still good together and we do not intend to end it any time soon for any reason, because it a project of God that is beyond the two of us.

And, that is why it is still possible for us to be running, maintaining and sustaining it until now.

She is still Mrs. Foluke Daramola Salako and I am still her proud husband.

He concluded as saying;

In conclusion, as I have always said, when things of this nature are being done against the sanity and sanctity of our marriage, anything you do not hear or read from our personal social media sources, or we come out to authorize anybody to do or publish on our behalf, is not from us and should never be taken as coming from us or about us.

It remains within the premise of beer parlor; pepper soup and irresponsible journalism.

There can never be truth in it, because it is not from us. 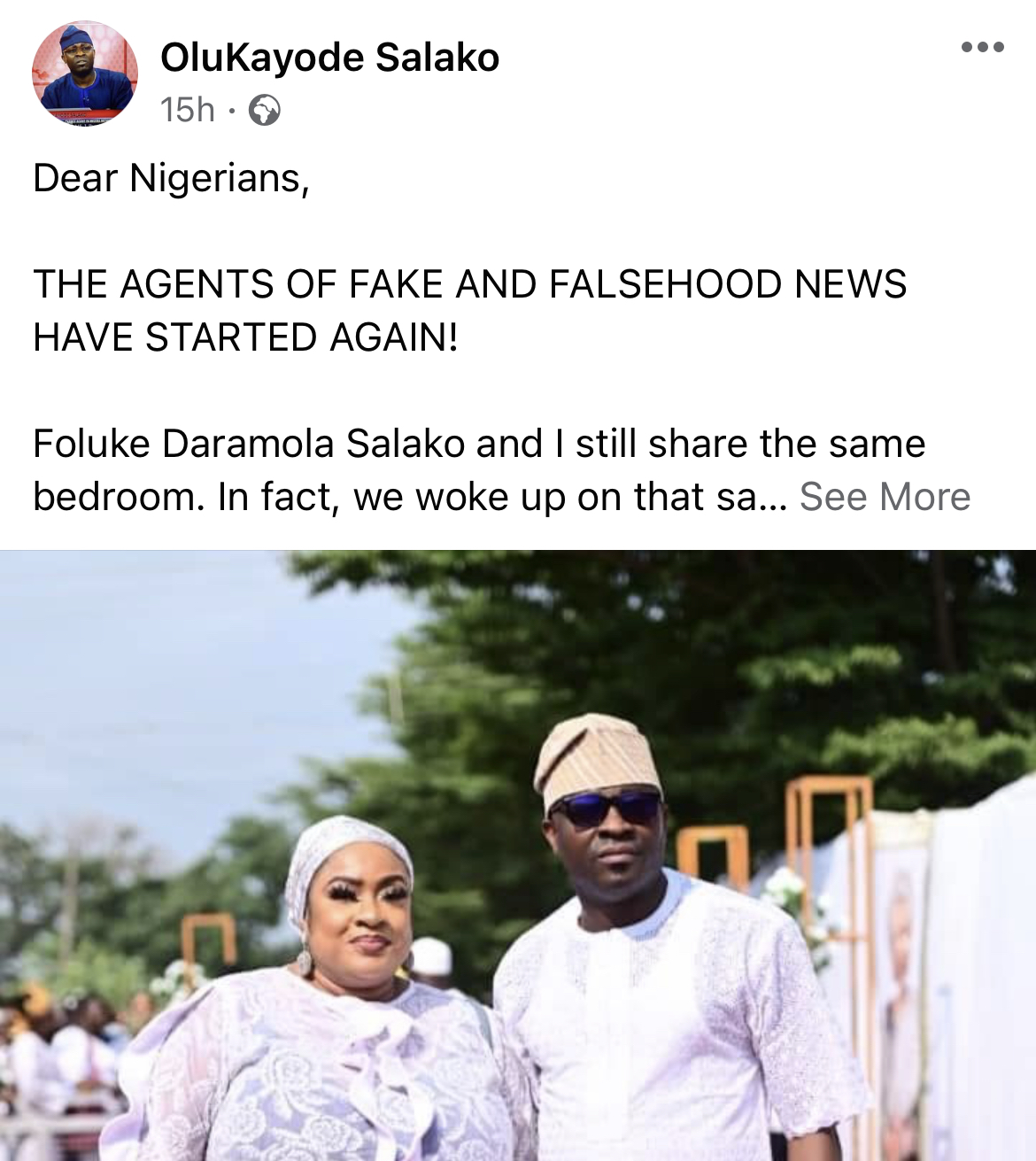 Celebrity Jeweller, Malivelihood And Deola Smart’s Marriage Allegedly On The Brink Of…

“75% Of Rape Cases My NGO Is Handling Involve Religious…