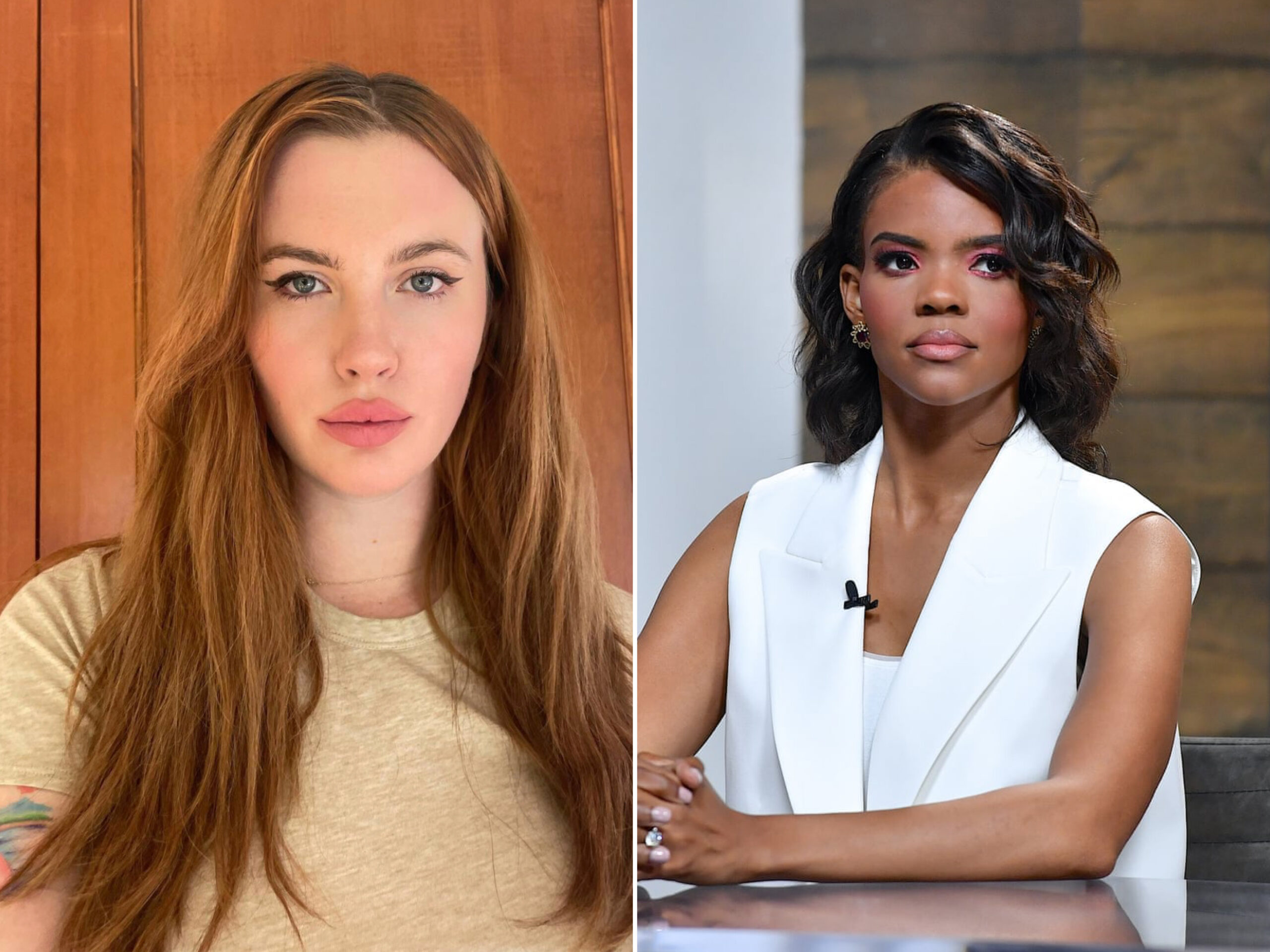 Her response came after the conservative pundit, 32, criticised her father on social media over the shooting that killed cinematographer Halyna Hutchins and injured Director, Joel Souza on October 16.

In Owens’ since-deleted tweets, she wrote;

What has happened to Alec would be an example of poetic justice if it weren’t for the actual innocent people that were murdered by him. Pray for their families. So sad. 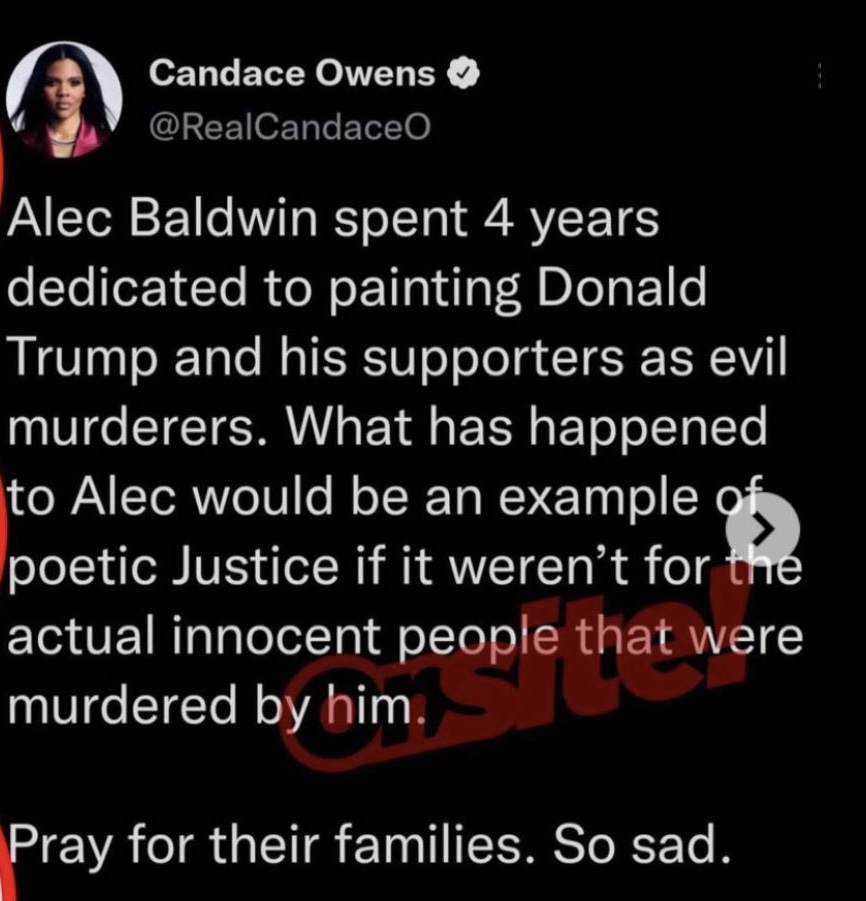 Reacting, Ireland on her Instagram Story wrote;‘You are the most disgusting human, cancerous human being I’ve ever come across’.

Regardless of your foul opinions most of the time, the fact that you would disrespect the life of a woman who was accidentally and tragically killed… Shame on you.’ 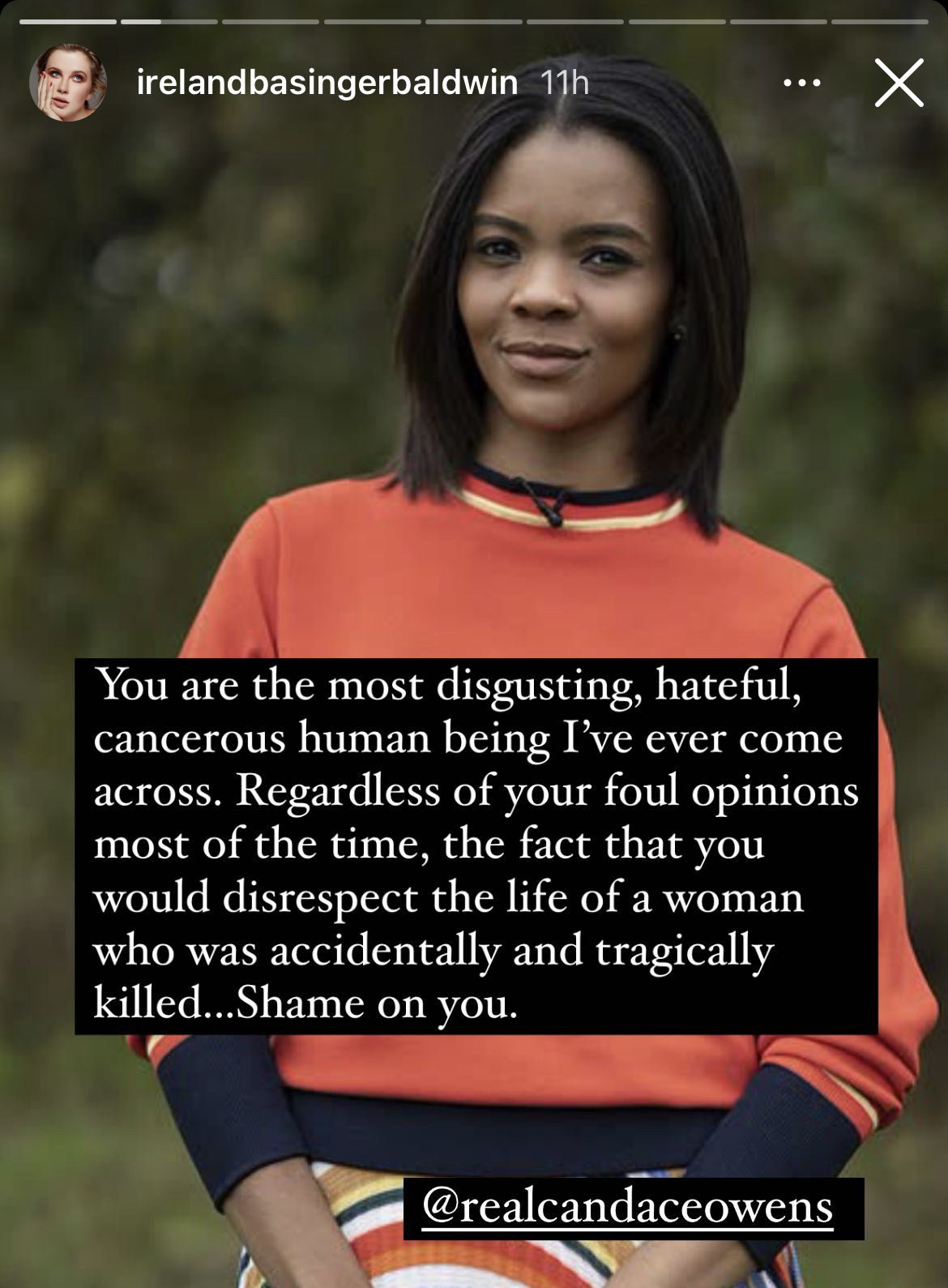 Ireland also informed her more than 677,000 followers she would be taking an ‘Instagram break’ as she is ‘ashamed to breathe the same air as this woman.’

Be a republican. Be unvaccinated. I don’t give a f**k. There are plenty of liberal ones that I support as well… But one f***ing thing I find myself doing is being RESPECTFUL.

But we aren’t debating masks and vaccines and abortion and trans rights here… a woman’s life was lost. Your tweets, lack of information, and ignorance are hurting people. 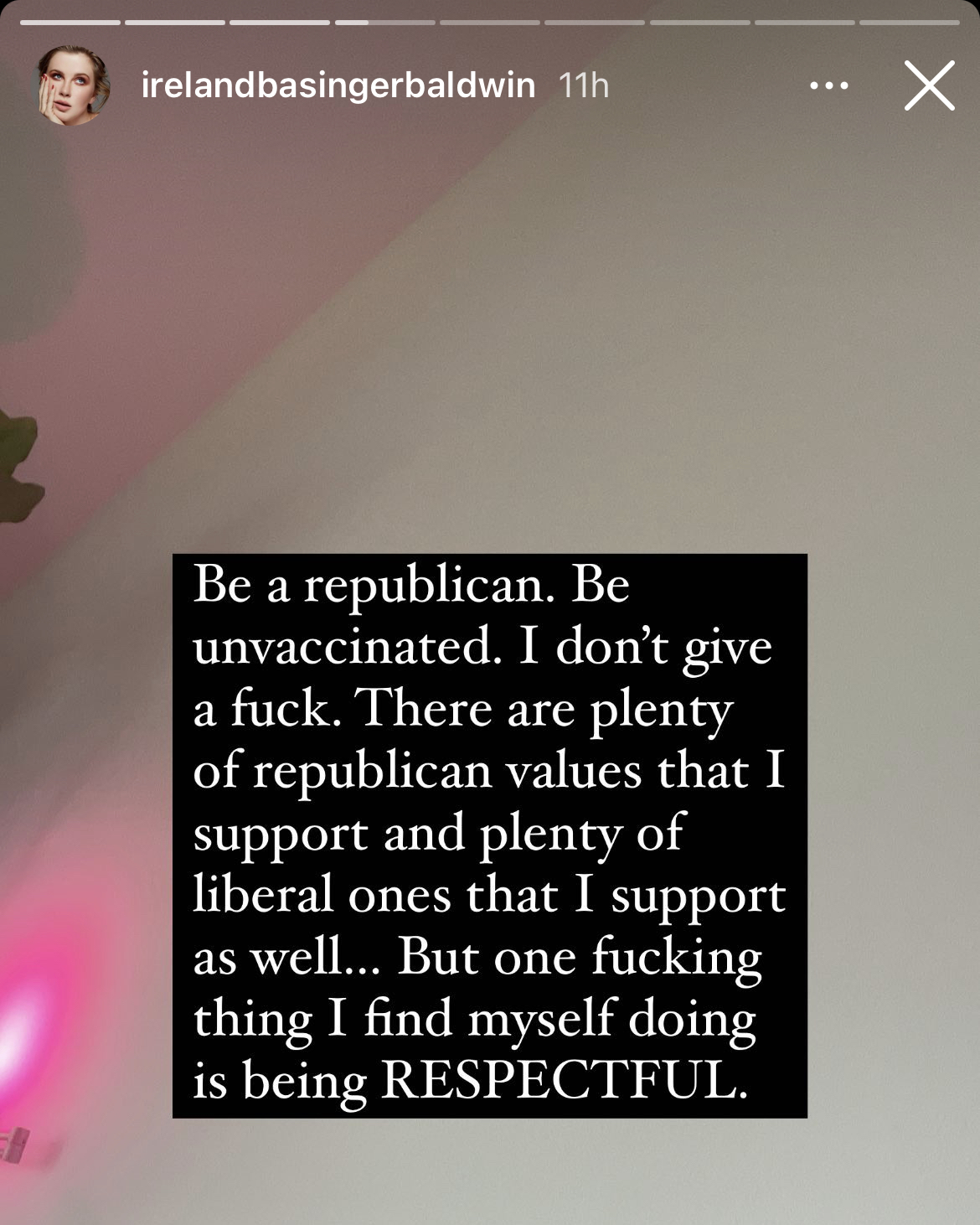 You and that scumbag @jackmposobiec don’t have a clue what you’re even talking about and you usually never do.

I respect people’s opinions… but if you support these absolute clowns… please don’t follow me anymore. I beg. 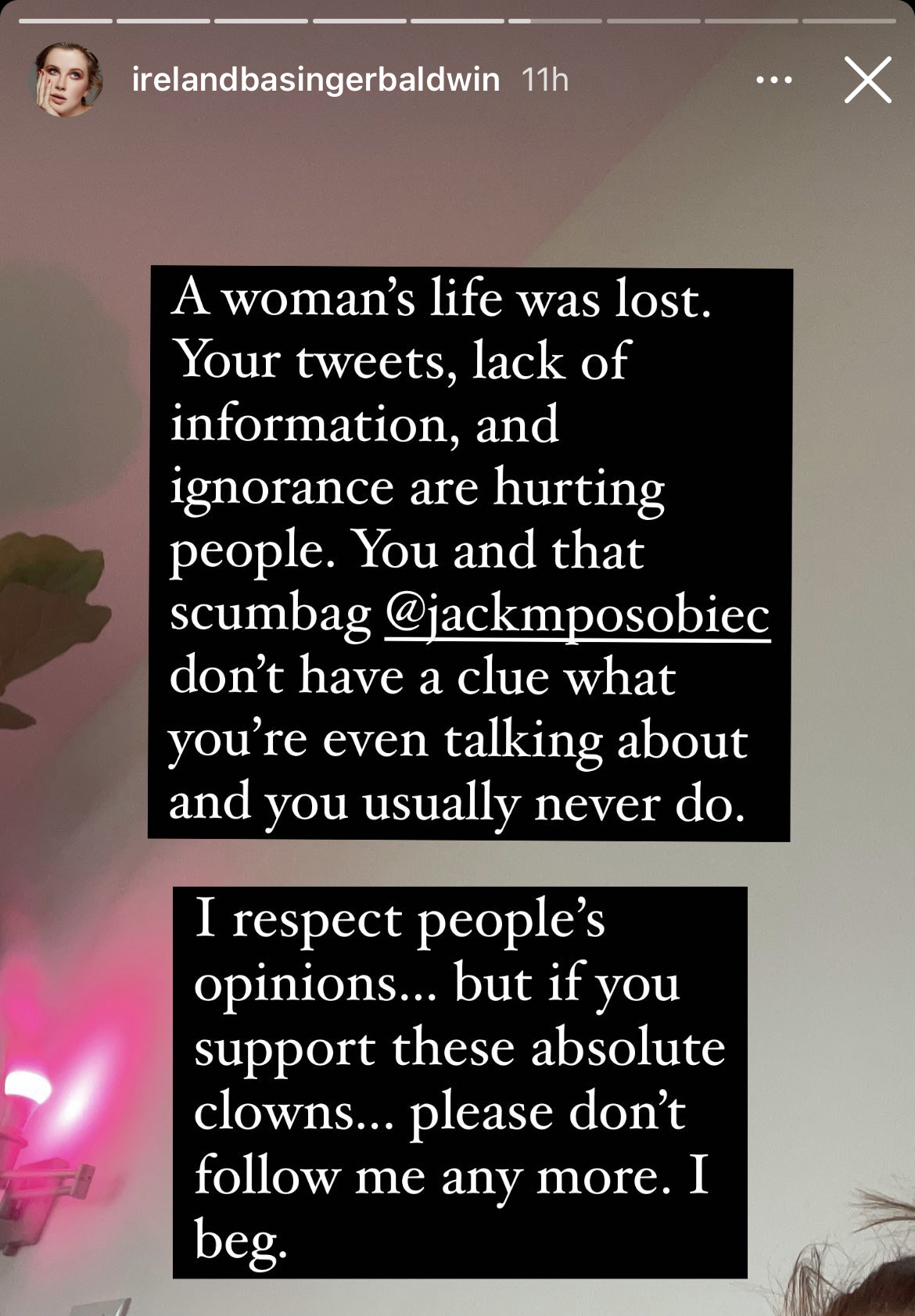 Ireland also urged anyone ‘trying to defame’ her father over ‘this tragic situation’ to ‘hit that unfollow button’ because it breaks her heart that people can be ‘so hatefully ignorant.’

Hours later, Ireland updated her fans to let them know she and Owens had an ‘actual conversation’ that went a ‘long way.’ 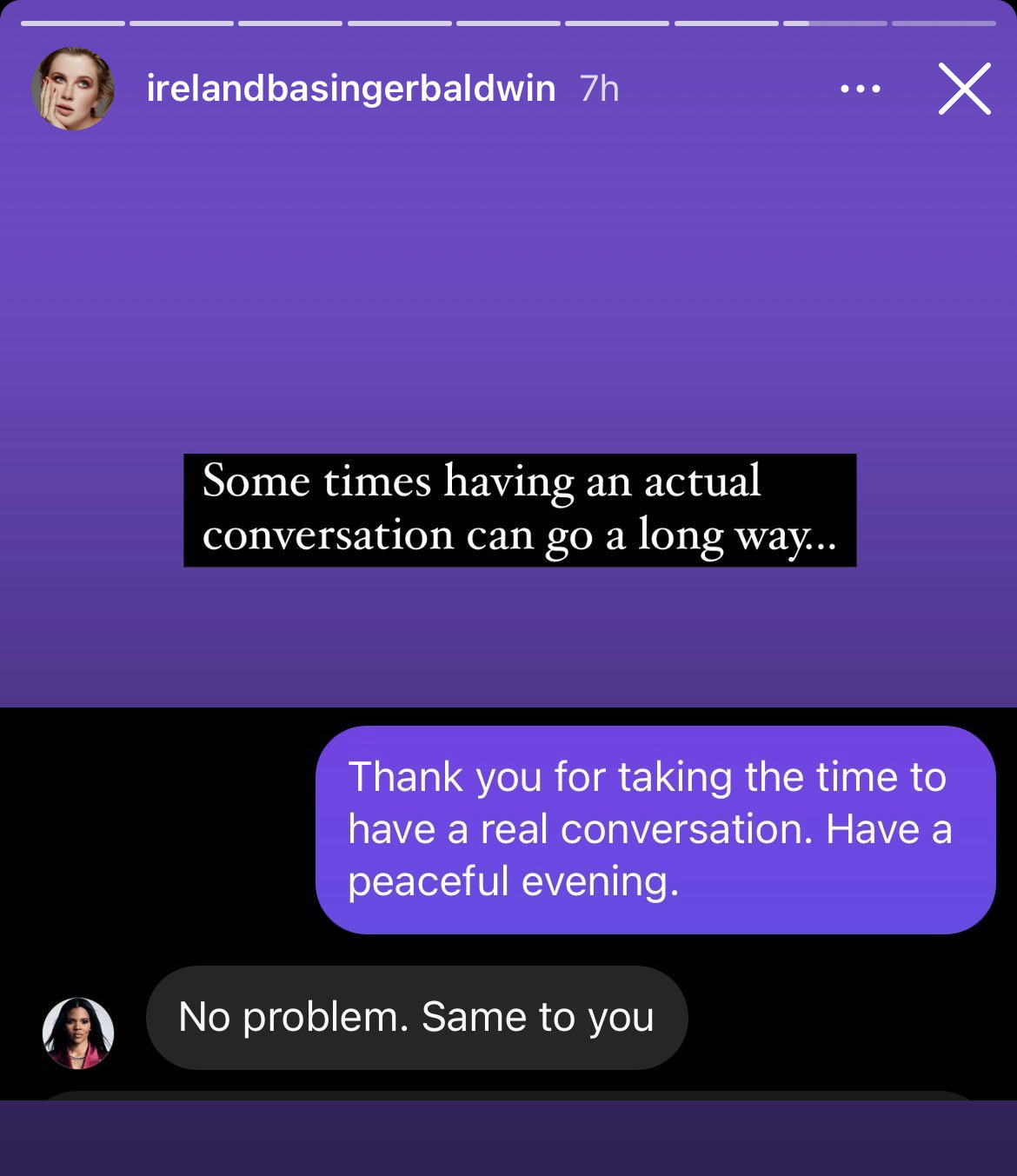 In a screenshot of their direct messages, the beauty thanked Owens ‘for taking the time to have a real conversation.’

After wishing the conservative author a ‘peaceful evening,’ Owens replied ‘no problem. Same to you.’

I will always stand for what I do… but one thing we need of in this world is perpetuated hate and anger and fighting… especially in the wake of this tragedy. Thanks, again, to everyone who has been so kind and supportive. 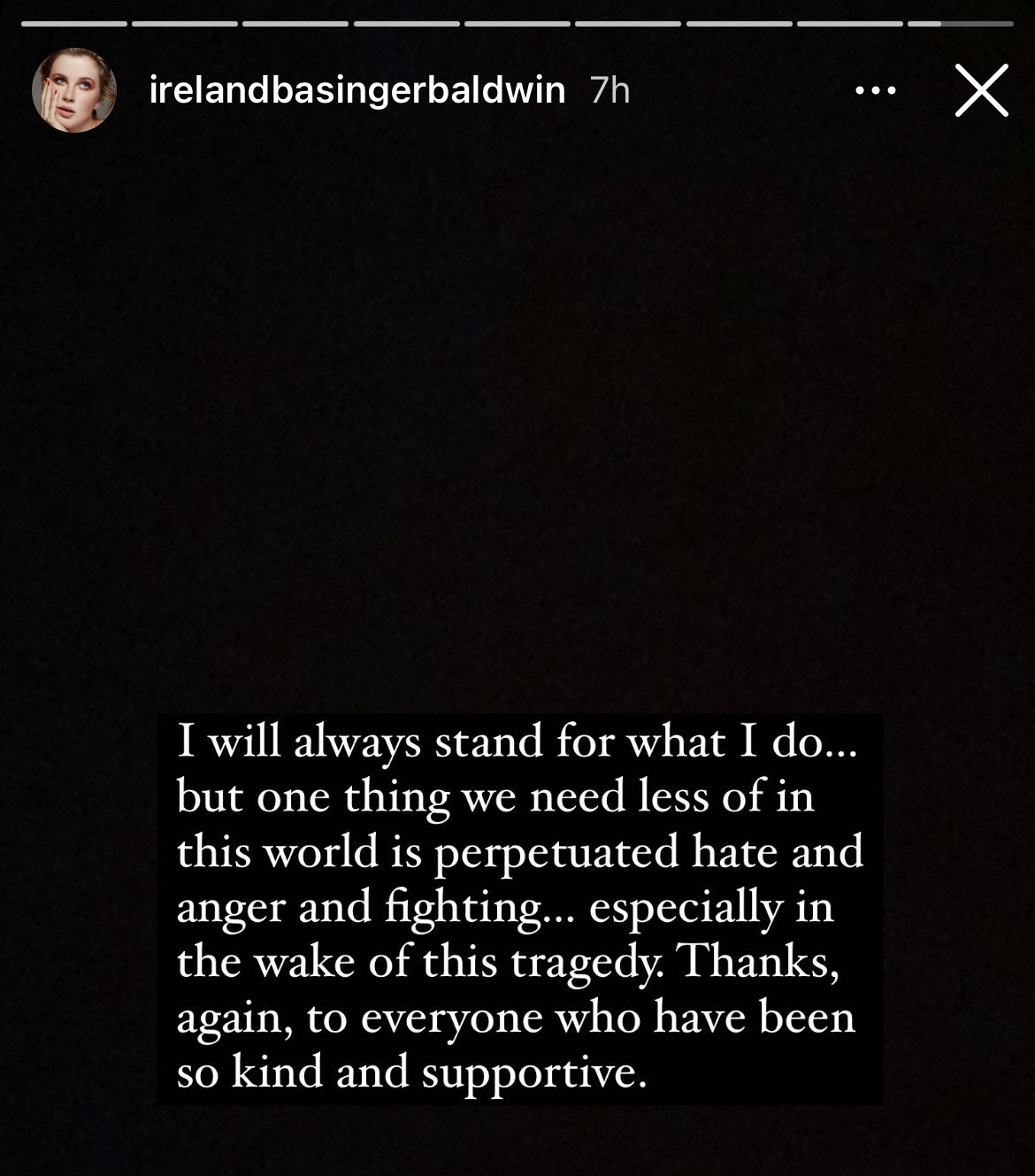