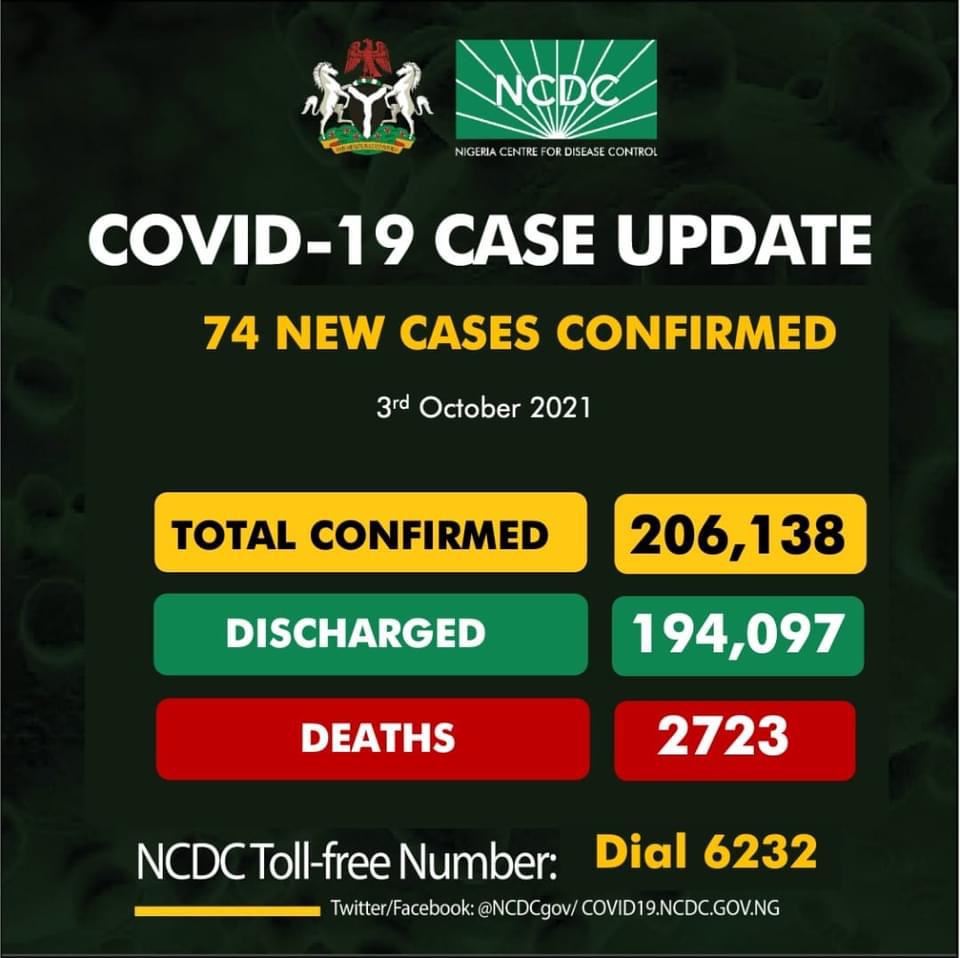 Nigeria may already be heaving a sigh of relief from the third wave of coronavirus pandemic associated with Delta variant of the virus as new infections have relatively been low in the past few days.

NCDC disclosed this in an update on its official website, adding that the fatality figure remains at 2,723.

With the latest update, the total number of infections in Nigeria now stands at 206,138.

NCDC stated that Nigeria has successfully treated and discharged 194,097 people.

According to NCDC, Lagos State, the country’s epicentre for the pandemic, came first on the log with 36 cases, and was followed by Edo State with 11 cases.

FCT also recorded nine cases from the disease, while Akwa-Ibom and Sokoto recorded six cases each.

Delta State in the South-south recorded three cases while the trio of Benue, Oyo and Rivers States recorded a single case each.

Meanwhile, Mikhail Murashko, Russian health minister, says all the barriers to registering the country’s Sputnik V COVID-19 vaccine with WHO has been cleared and only some paperwork remains to be completed.

Sputnik V shot is used in Russia and is also authorised for use in many countries. It is undergoing a review by WHO and European Medicines Agency (EMA).

“Russia’s position on promotion and registration of the Sputnik V vaccine was heard, we have removed all the questions for today,” Murashko was quoted as saying.

In other news, Donald Trump, former US president, during an interview on Saturday said he got vaccinated with the Pfizer COVID-19 vaccine and would consider taking the booster shot.

In March, an adviser of Trump had told NBC News that the former US president and Melania Trump, his wife, quietly received COVID-19 vaccine in January. However, the type of vaccine received by Trump and Melania was not known.

Resident Doctors Call Off Strike, To Resume On Wednesday