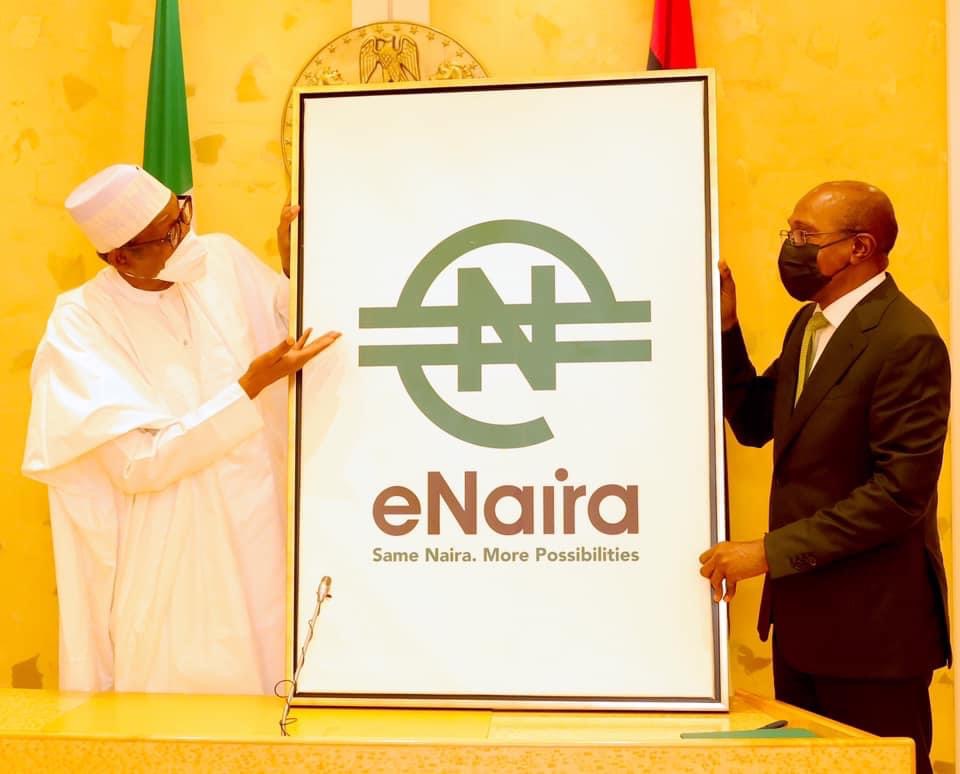 eNaira is a digital representative of the paper Naira currency issued by Central Bank of Nigeria. It will be a “complementary” legal tender in Nigeria, having the same exchange value as the Naira, and maintain a “equivalence of value” with the Naira.

It’s a culmination of several years of research work by CBN in advancing the boundaries of payments system in order to make financial transactions easier and seamless for every stratum of society.

The launch was described by CBN Governor, Godwin Emefiele, as the first in Africa and one of the earliest around the world. 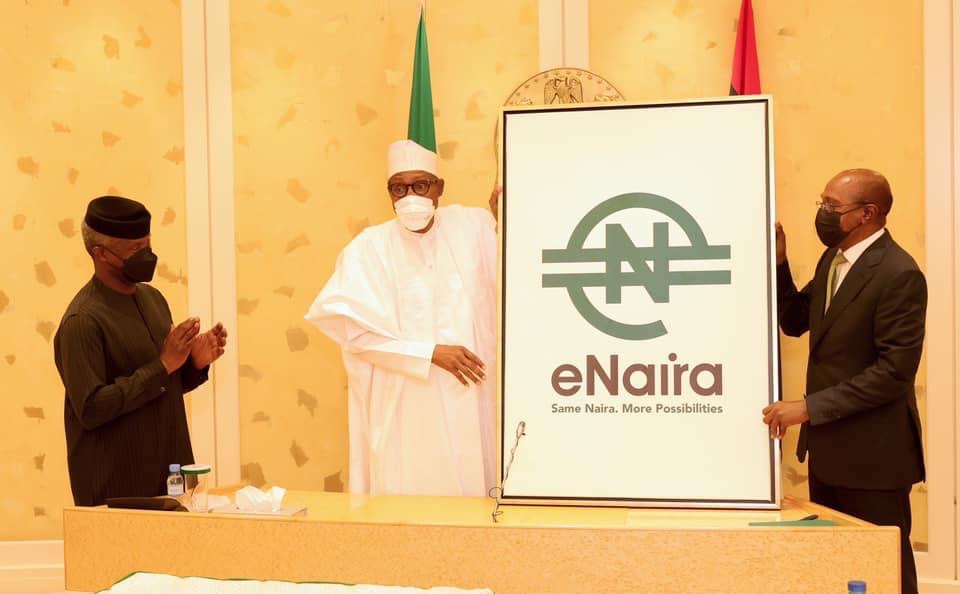 The event was held on Monday at the State House in Abuja, with the Vice President, Yemi Osinbajo; governor of Central Bank of Nigeria (CBN), Godwin Emefiele, and other dignitaries in attendance.

During the launch, President Buhari said the adoption of new CBN digital currency is estimated to increase Nigeria’s GDP by $29 billion over the next 10 years. 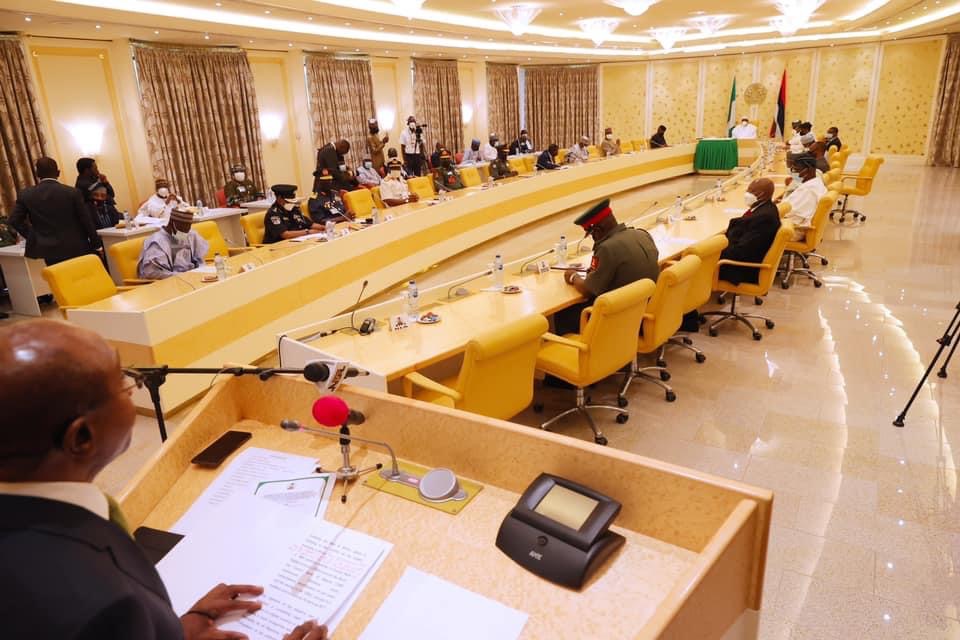 “We have become the first country in Africa and one of the first in the world to introduce a digital currency to our citizens,” Buhari said at the event.

He commended the Governor of Central Bank, Godwin Emefiele, his deputies and the entire team of staff who worked tirelessly to make the launch of Africa’s first digital currency a reality.The President, who assured Nigerians of the safety and scalability of Central Bank Digital Currency (CBDC) system, said the journey to create a digital currency for Nigeria began sometime in 2017.

On his part, Emefiele said;

Mr President, today you make history, yet again, with the launch of the eNaira – the first in Africa and one of the earliest around the world.

Mr. President, as you make groundbreaking reforms, there has been continuing debate on the true value of the Naira.

Rather than worry today on the direction of the exchange rate, let us take a step back and analyse how we got here in the first place.

Emefiele added that the CBN has given careful consideration to the entire payments and financial architecture and has designed the eNaira to complement and strengthen these ecosystems and has implemented secure safeguards and policies to maintain the integrity of the financial system.

He pledged that there would be strict adherence to the anti-money laundering and combating the financing of terrorism (AML/CFT) standards in order to preserve the integrity and stability of Nigeria’s payment system. 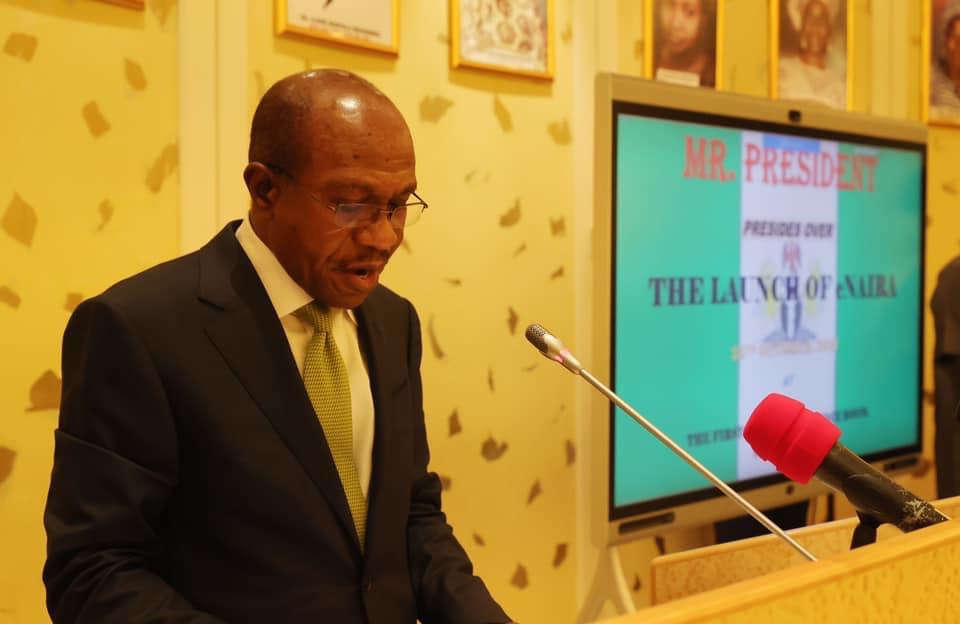 According to Emefiele, since the eNaira platform went live, there has been overwhelming interest and encouraging response from Nigerians and other parties across the world with over 2.5 million daily visits to the website.

He listed the following milestones:

The CBN governor also used the occasion to commend President Buhari for making history, yet again, with the launch of the eNaira – the first in Africa and one of the earliest around the world.

He also dispelled fears on the nation’s foreign reserves, saying the reserves are strong and getting stronger by the day.

Other countries like China, Bahamas, and Cambodia have also launched digital currencies.

The digital currency has two applications – eNaira speed wallet and eNaira merchant wallet, which were launched on the Google Playstore and Apple Store on Monday at the State House, Abuja.

A statement on the eNaira website explained the overall function of the currency and its value to Nigeria’s economy.

eNaira is a Central Bank of Nigeria-issued digital currency that provides a unique form of money denominated in Naira.

eNaira serves as both a medium of exchange and a store of value, offering better payment prospects in retail transactions when compared to cash payments.

Additionally, the new payment system which has taken four years to crystallise, will drive financial inclusion, serve as a backbone for electronic payment in Nigeria and also enable the movement of more people from the informal to the formal sector, hence scaling up the tax base of the country.