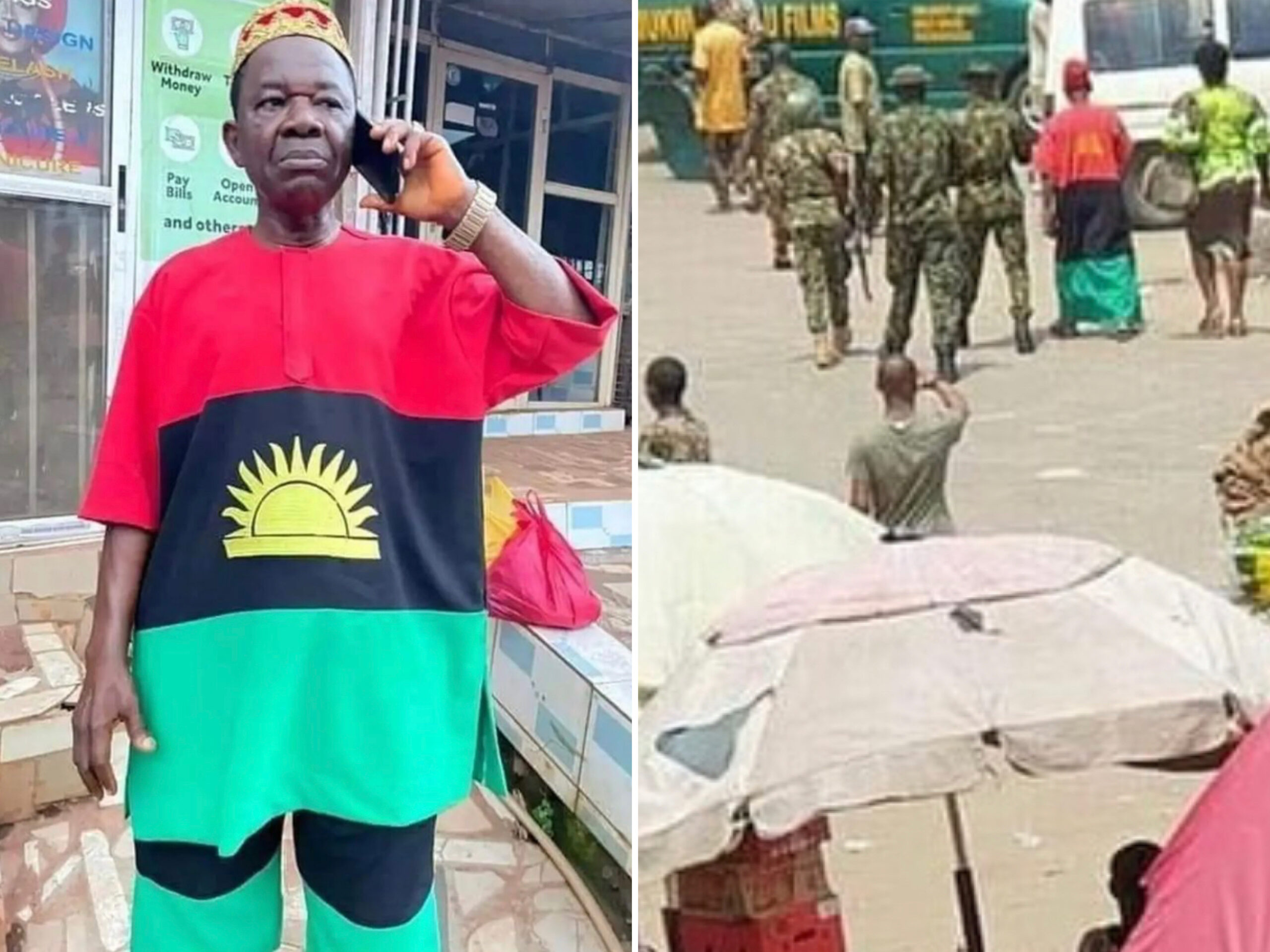 Recall that earlier today, videos of the veteran actor who was dressed in a Biafra flag outfit being harassed by soldiers surfaced online.

Many Nigerians condemned the act, saying calling on the state and federal government to intervene in the matter.

Troops of Nigerian Army(NA) have arrested one Chiwetalu Agu while inciting members of the public and soliciting for support for the proscribed Indegenous People of Biafra (IPOB). Dressed in a very well known attire of the proscribed group, Chiwetalu Agu was picked up for questioning while inciting members of the public to join the proscribed group. Though he attempted puting up some resistance when troops made effort to take him into custody, he was not assaulted or subjected to brutalisation.

While the NA recognizes the inalienable rights of the citizenry to freedom of movement and expression as enshrined in the Constitution of the Federal Republic of Nigeria, it is apparently a violation for any individual or group to incite the public to cause mayhem or break down of law and order. It is therefore pertinent to state that while exercising such freedoms, it must be done within the confines of the law, bearing in mind the imperative for peace, and national security.

For the avoidance of doubt and emphasis, the Indigenous People of Biafra(IPOB) remains proscribed . Therefore, any individual or group seen to be projecting and advancing the cause or activities of the group is viewed as brazenly challenging the constitutionality of Federal Republic of Nigeria. More worrisome, was the fact that considering the prevailing security situation of the region, coupled with the ongoing Exercise GOLDEN DAWN , his action could be a tacit endorsement and support for the proscribed group. We have all witnessed the activities of the group take a violent dimension in recent times.

Chinwetalu Agu has clearly demonstrated uncharitable disposition to negate peace and security in the region, hence, he is taken into custody for preliminary investigation. It is important to once again place on record that the allegation that he was brutalized is false and should be disregarded accordingly.

While the NA would not allow IPOB and its sponsors to hold the region captive and allow the security situation to degenerate, it is instructive to restate that national interest supercedes any parochial consideration. Individuals or groups who fan the embers of violence are warned to desist or face the consequences of their actions. The ongoing Exercises are on course and will rid the region of all forms of criminality.

The peace loving and law abiding people of the South East are enjoined to please go about their normal activities, as efforts are ongoing to bring perpetrators of violence to book. They are equally urged to continue to support the security agencies to restore normalcy to the region in furtherance of peace.