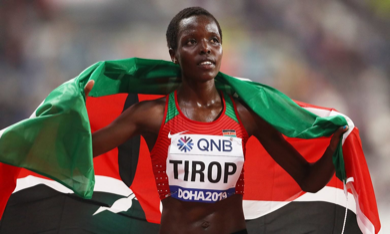 Kenyan Olympic star, Agnes Tirop, has been found dead in her home after she was allegedly stabbed by her husband.

Her death was confirmed by Barnaba Korir, the chairperson of Athletics Kenya in Nairobi Region.

In a statement, he wrote;

Athletics Kenya are distraught this afternoon to learn about the untimely death of World 10,000m bronze medalist Agnes Tirop.

Tirop was found dead at their home in Iten after she was allegedly stabbed by her husband. We are still working to unearth more details surrounding her demise.

He noted that Kenya has lost a jewel (Tirop) who was one of the fastest-rising athletics giants on the international stage.

Kenyan media reported she was found with stab wounds in her abdomen, although police did not immediately give out any details other than to say they were investigating.

“It is even more painful that Agnes, a Kenyan hero by all measures, painfully lost her young life through a criminal act perpetuated by selfish and cowardly people,” Kenya President, Uhuru Kenyatta said in a statement.

I urge our law enforcement agencies led by the National Police Service to track down and apprehend the criminals responsible for the killing of Agnes.

Last month, Tirop broke the world record in the women-only 10-kilometre road race in Germany, crossing the line in 30:01 to shave 28 seconds from the previous record held by Morocco’s Asmae Leghzaoui from 2002.

Her career took off when she won the world cross-country title in 2015 at the age of 19 to become the second youngest champion ever.

Tirop home in Iten, western Kenya, is a town renowned as a training base for distance runners.

UK Lawmaker, David Amess Stabbed To Death While Meeting With…