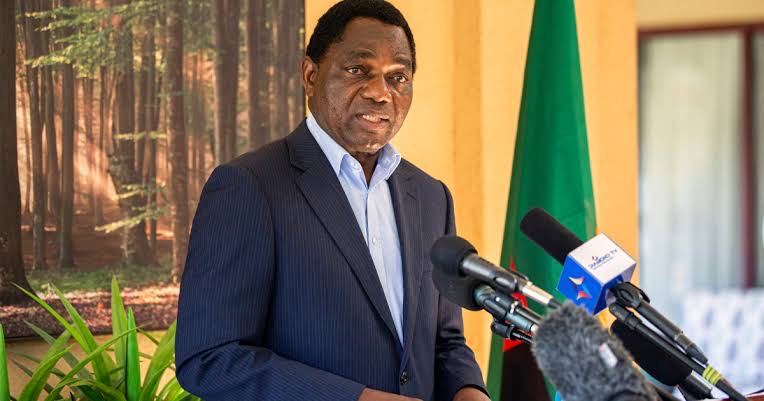 Hichilema was a detainee under Bwalya in 2017, when he was charged with treason for allegedly putting former President Edgar Lungu’s life in danger.

The opposition leader, as of the time, was slammed with the treason charge over the failure of his convoy to give way to Lungu’s motorcade.

He was freed about four months later after the state prosecutor dropped the treason charges against him.

While swearing in Bwalya and other officers on Wednesday, the president praised him for acting professionally during an oppressive regime — referring to Lungu’s administration.

He asked Bwalya and Fredrick Chilukutu, commissioner-general of the correctional service, to reform all the prisons in the country.

Let me be deliberate and talk around my two colleagues in the correctional services. I am a graduate of that institution and I am fully aware of what goes on in that institution. They are supposed to be correctional facilities, at the moment they are not. The conditions there had on us detainees, as former detainee myself, I send a message to you that your selection was careful, very careful in line with our dream to reunite this country and this will become a common story at almost every swearing-in ceremony so that we can depart from days of exclusion to days of inclusion but more for you work towards making those facilities a truly correctional facility.

I am saying let’s decongest those places. As a graduate there I know that a cell meant for 20 people there 170 of us. It’s nighttime you are supposed to go to sleep, there is no sleeping there. I never knew that I will end up in maximum prison and the deputy commissioner-general, Bwalya, is a young man, we met in those circumstances. He was my boss. Under difficult conditions and quite an oppressive regime, he tried very hard to act professionally.

He knows what I’m talking about, I know what I’m talking about. And I looked and said this young man, how is he managing to stay reasonable in an environment like this. He was my boss. I was a bit noticed sometimes because I did not accept certain instructions which I felt was against my human right. But we got along in a very strange way. He was my boss, today he is being sworn in by one of his detainees. Life goes round.

Hichilema was sworn in as president last month after he defeated ex-President Edgar Lungu in a landslide victory. He was elected president after a failed fifth attempt.

Watch a video of the President speaking below;