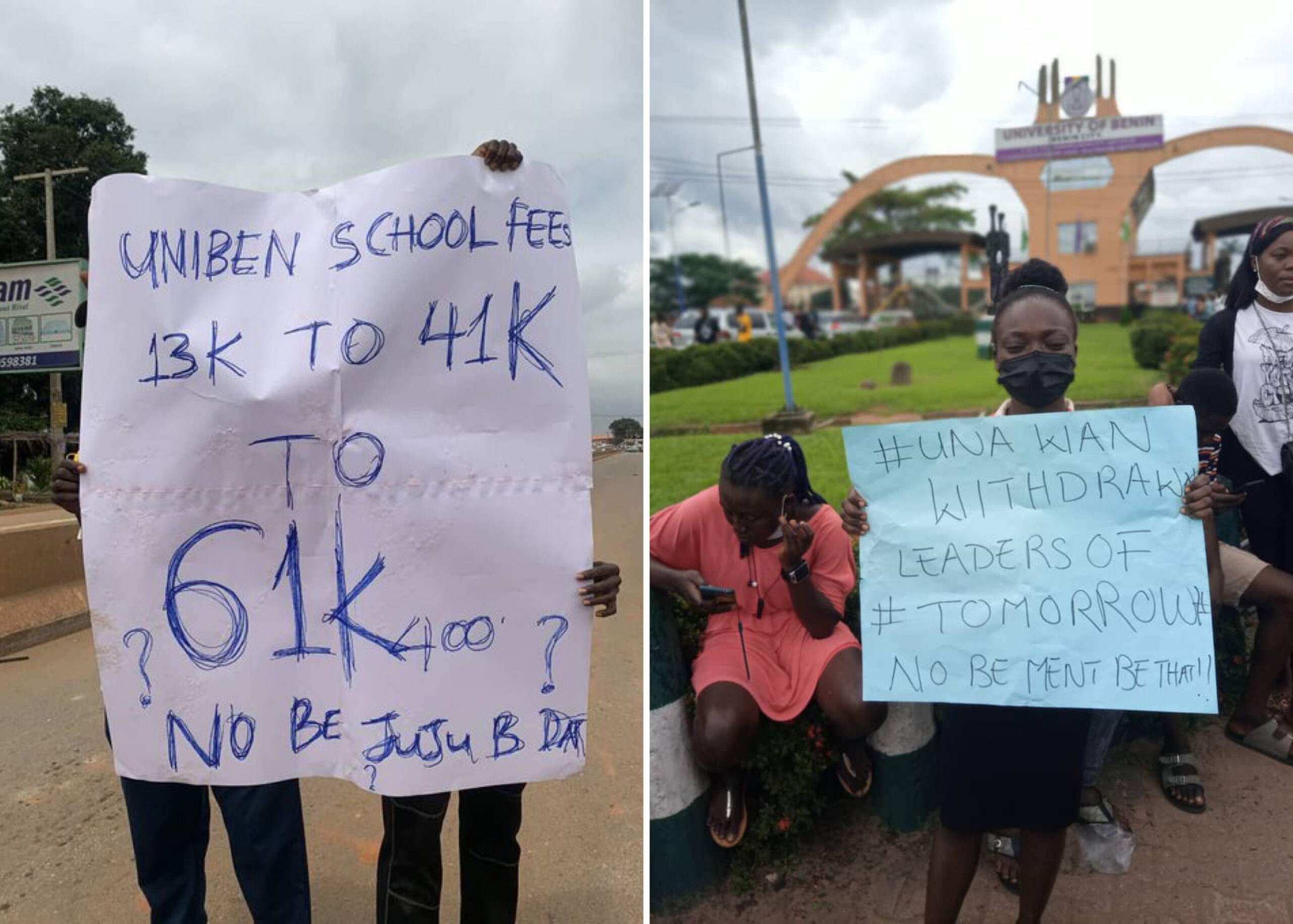 Vehicular movement was disrupted at Ugbowo section of Benin-Ore highway as students of University of Benin protested the imposition of N20,000 late registration charges by the institution.

The students cordoned off the entrance of university’s main campus in Ugbowo on Tuesday morning, which affected the free flow of traffic.

Lectures and other academic activities within the campus were also stalled as a deluge of students held up placards.

We trooped out in mass today !!! After 4 weeks of resumption VC added 20k to our school fees and if you don’t pay by this week you’ll be asked to withdraw. Ment?? #unibenprotest #unibenprotest21 pic.twitter.com/kWgWfvtyrM

Even Epa dey complain bitterly Epa get pikin for this school#unibenprotest pic.twitter.com/HmobaD8REt

VC of UNIBEN added 20k plus to late school fees barely a month of resumption. With everything happening in this country . You think people pay school fees late because they feel like? People are suffering ffs#protestatekehuan #unibenprotest pic.twitter.com/97K6bBvmhX

A student of the university, who preferred anonymity, described the decision of the university management to NAN as harsh, saying it did not take into consideration “the unfavourable economic situation in the country.” 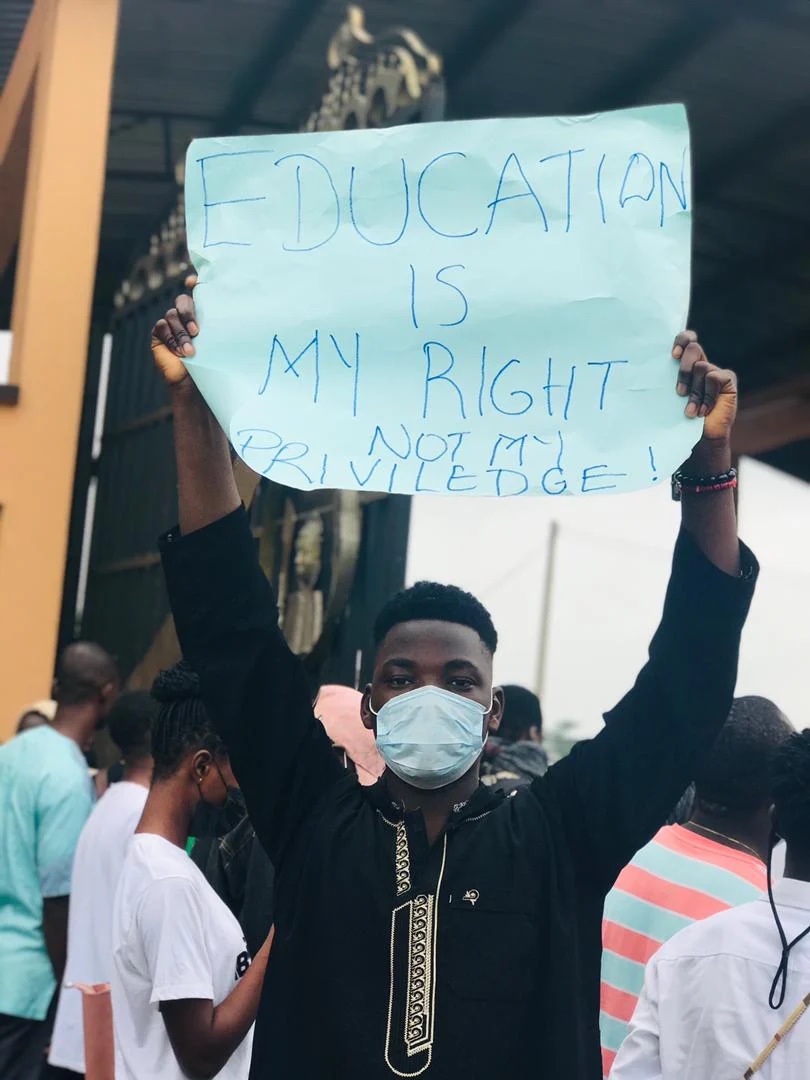 This is so sad and we will continue the protest unless the decision is rescinded.

On his part, President of the Student Union Government (SUG), Benjamin Egwu, also said that the decision was in bad faith. 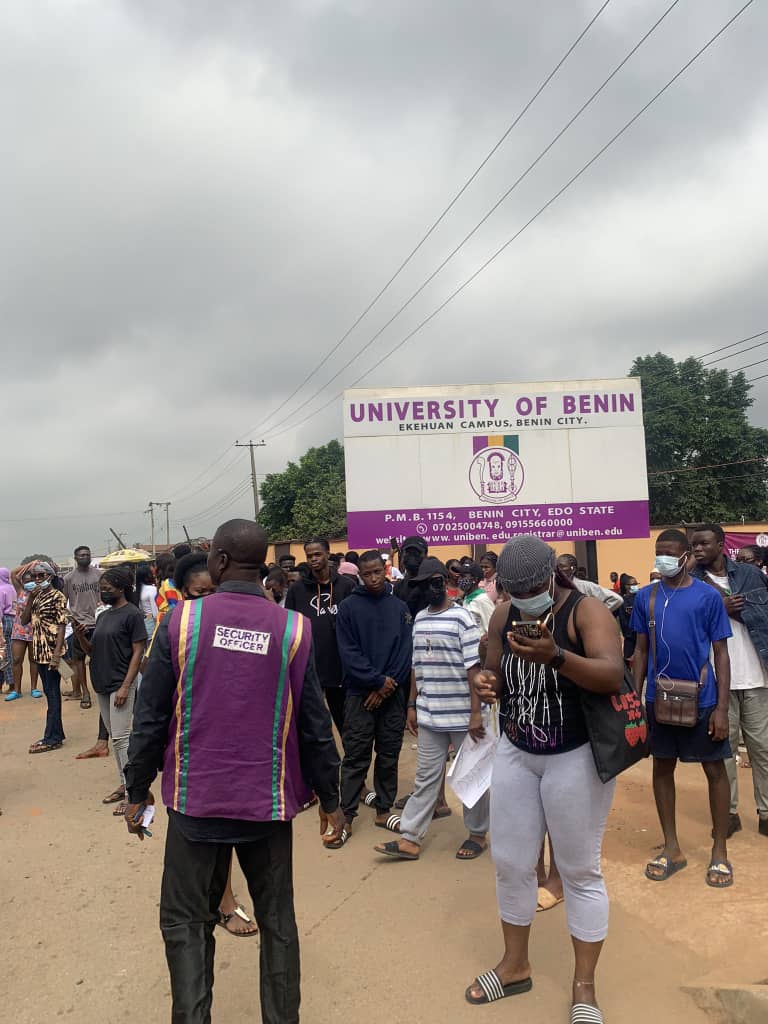 Earlier this semester, the management of the University of Benin announced that it would put extra charges if school fees were not paid on time and we are saying they should not charge for late payment because the time is not okay.

The school resumed on August 15, and one month after they began to charge N20,000. Our school fees as at the time I was admitted into the university in 2016 was N13,000 for Arts students and N15,000 for Science students. 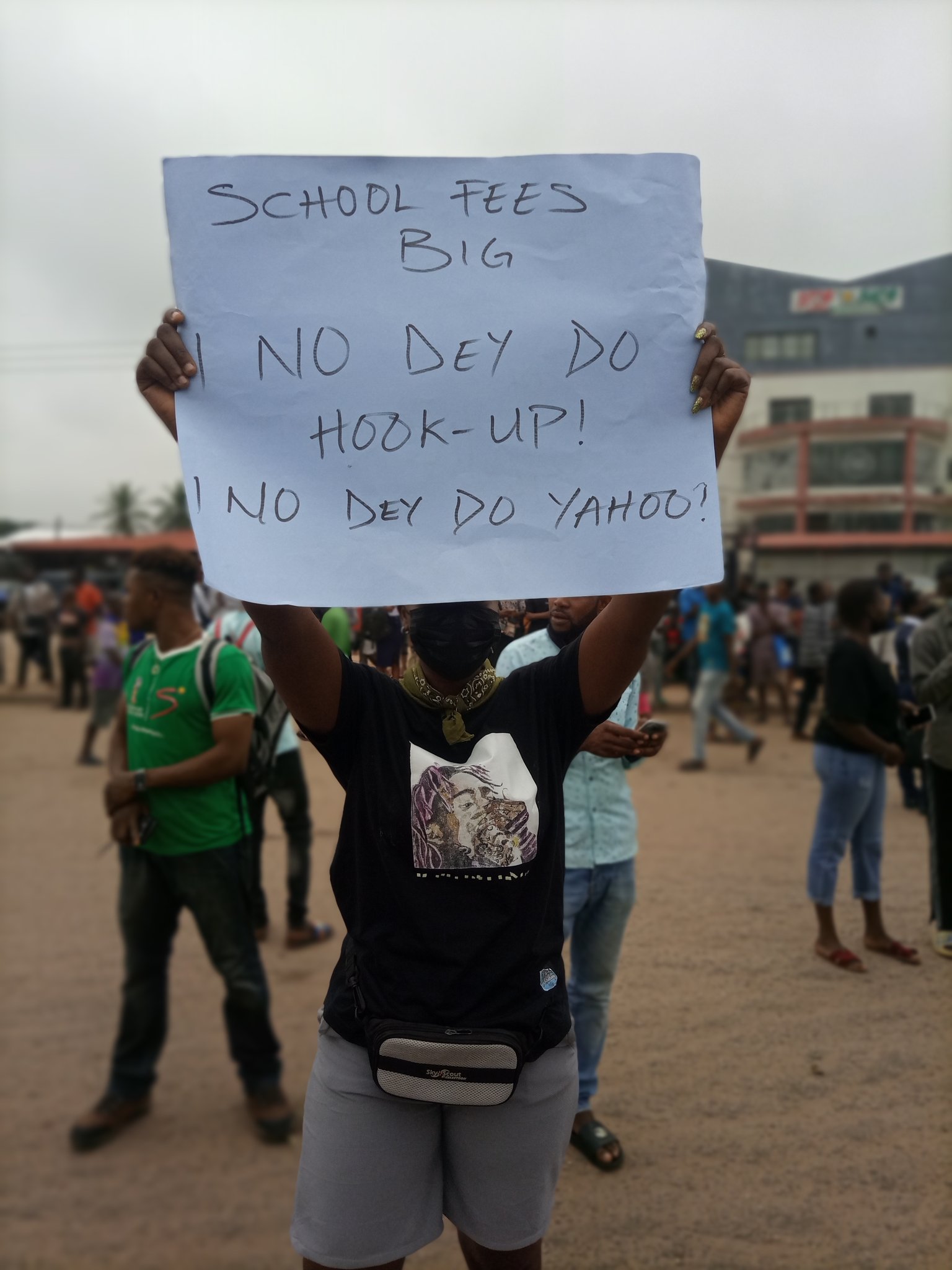 In 2018, it was increased to N41,000 for arts and N45,000 for science. The N20,000 additional charge is unbearable for the students. Although a lot of students have paid school fees, those ones that are unable to pay truly don’t have the money now.

The SUG President alleged that the management had threatened to withdraw any student who failed to pay. 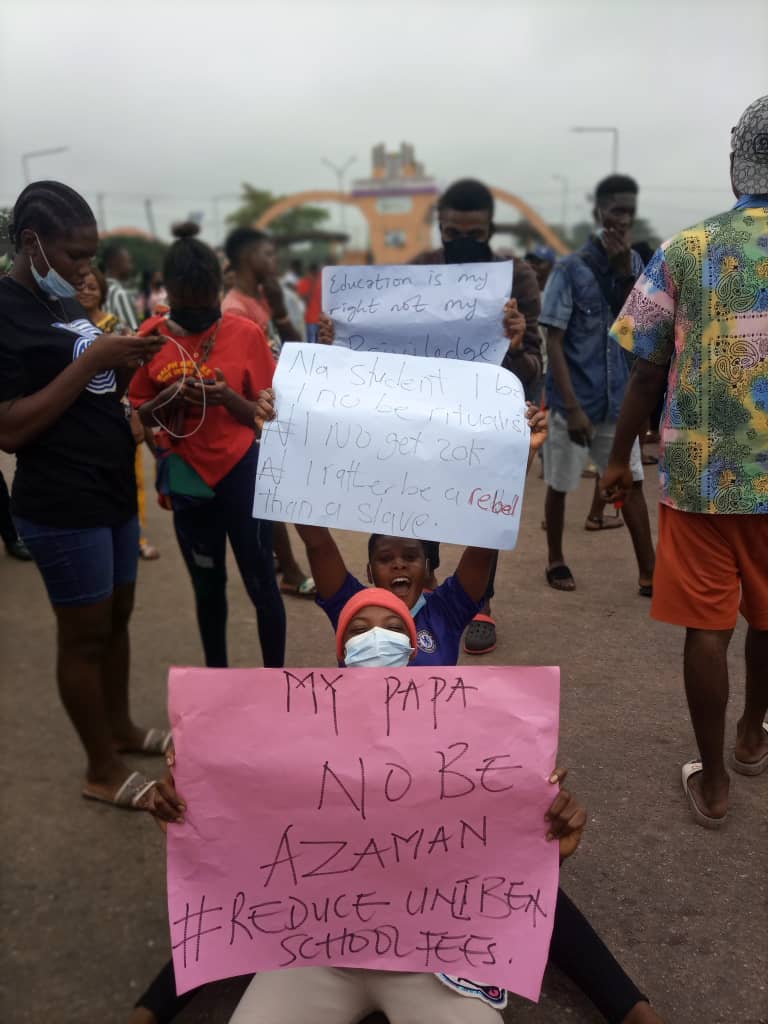 The excess of N20,000 is uncalled for. Before now, what we used to do is “no school fees, no examination;” there’s no problem with that. What the students are doing is right. Protest is not a bad thing. It is a way of appealing particularly when they feel cheated.

Mr Egwu said that the union had reached out to the institution’s management on the matter, even before the protest. 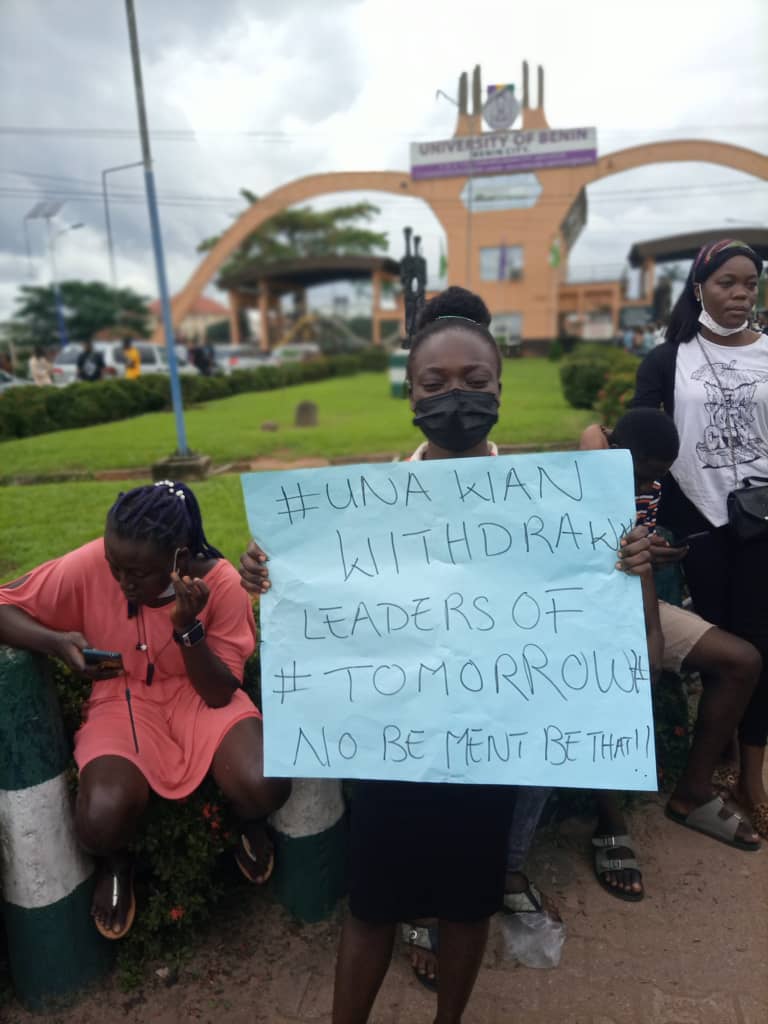 It is gathered that the students had attempted to dialogue with the school authorities including Lilian Salami, the incumbent vice-chancellor of the state-owned university, over the deadline to no avail. 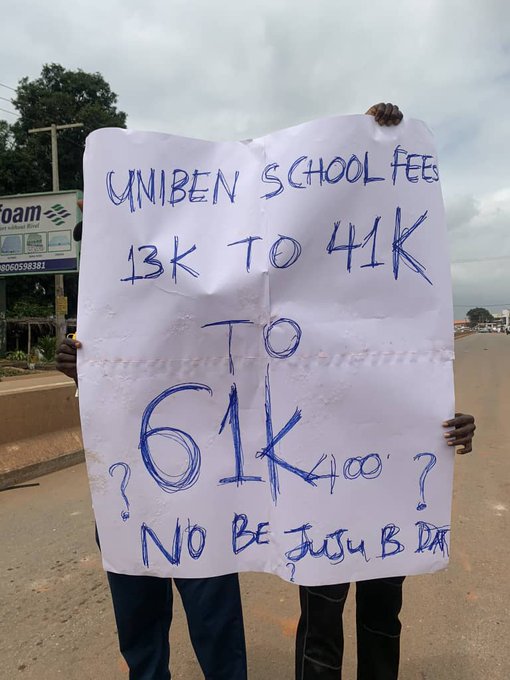 It is also said that the protest comes two days to the election of UNIBEN’s next student union government (SUG), which would have represented the protesting undergraduates before the university authorities in such situations.

UNIBEN Reacts To Rape, Killing Of Undergraduate In Church

Daddy Freeze Rejoices As University Of Benin Revokes The…