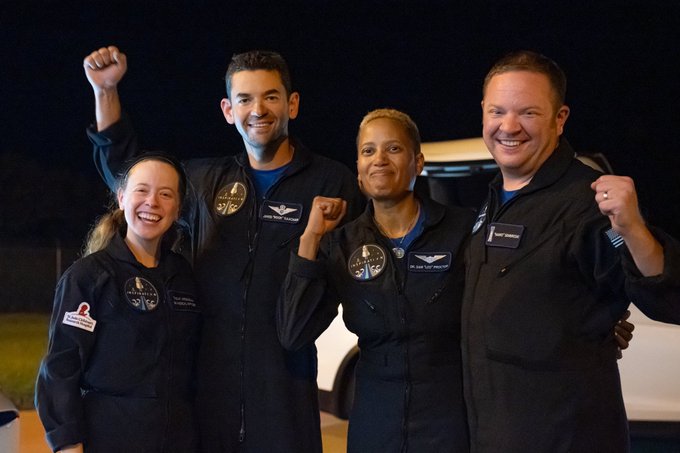 Four space tourists safely ended their trailblazing trip to orbit on Saturday with a splashdown in the Atlantic off Florida coast.

Their SpaceX capsule parachuted into the ocean just before sunset, not far from where their chartered flight began three days earlier, on Wednesday night.

The all-amateur crew was the first to circle the world without a professional astronaut.

This will be the third time that Elon Musk’s company has taken humans to space and back, after the return of two NASA missions, one August in 2020 and another in May this year. Both were bringing astronauts back from a stay at the ISS.

Unlike NASA astronauts, the members of the Inspiration4 mission did not go to International Space Station (ISS) but remained in orbit around the Earth.

Billionaire Jared Isaacman financed the trip, paying SpaceX tens of millions of dollars. Isaacman, who led the mission, offered the other three seats to strangers: Hayley Arceneaux, a 29-year-old nurse; Sian Proctor, a 51-year-old professor; and Chris Sembroski, 42, a US Air Force veteran. 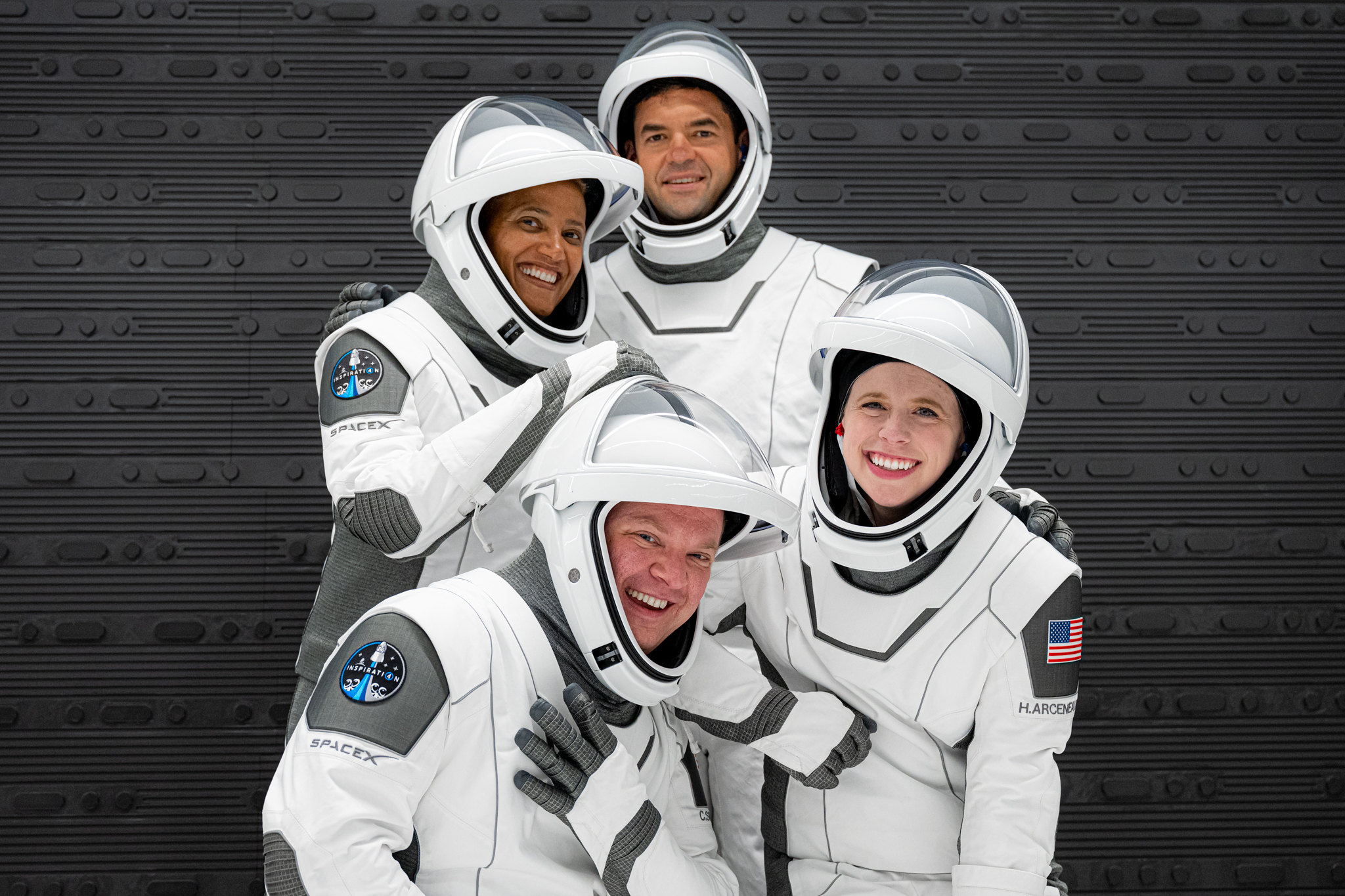 During the flight, the crew member’s vital signs were monitored to study the effects of the environment of space on complete novices.

The billionaire wanted to show that ordinary people could blast into orbit by themselves, and SpaceX founder Elon Musk took them on as the company’s first rocket-riding tourists.

“Your mission has shown the world that space is for all of us,” SpaceX Mission Control radioed.

“It was a heck of a ride for us … just getting started,” replied trip sponsor Jared Isaacman, referring to the growing number of private flights on the horizon.

SpaceX’s fully automated Dragon capsule reached an unusually high altitude of 363 miles (585 kilometers) after Wednesday night’s liftoff. Surpassing the International Space Station by 100 miles (160 kilometers), the passengers savored views of Earth through a big bubble-shaped window added to the top of the capsule.

The four streaked back through the atmosphere early Saturday evening, the first space travelers to end their flight in the Atlantic since Apollo 9 in 1969. SpaceX’s two previous crew splashdowns — carrying astronauts for NASA — were in the Gulf of Mexico. 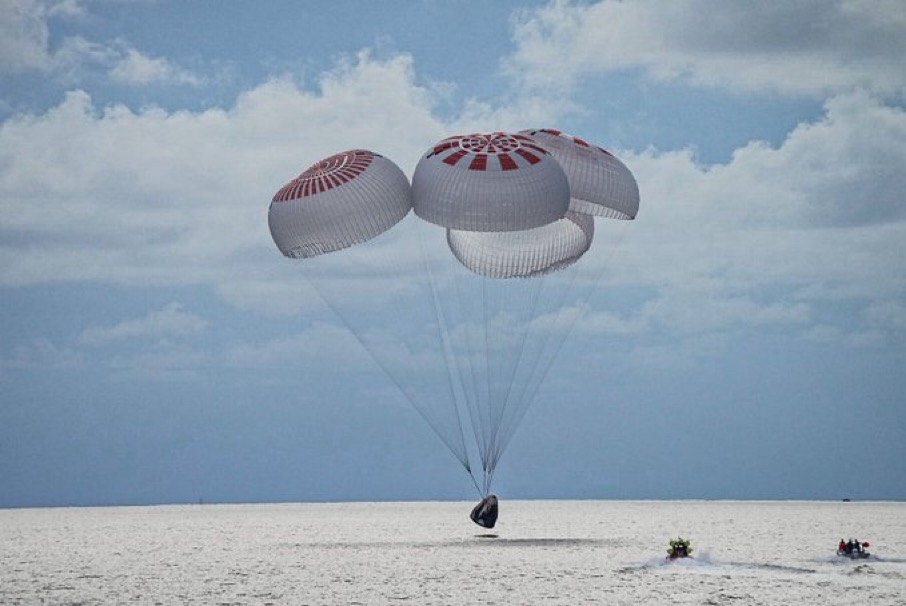 Within a few minutes, a pair of SpaceX boats pulled up alongside the bobbing capsule. When the capsule’s hatch was opened on the recovery ship, health care worker Hayley Arceneaux was the first one out, flashing a big smile and thumbs up. All appeared well and happy.

Their families were waiting near the scene of Wednesday night’s launch from NASA’s Kennedy Space Center.

This time, NASA was little more than an encouraging bystander, its only tie being the Kennedy launch pad once used for the Apollo moonshots and shuttle crews, but now leased by SpaceX.

Isaacman, 38, an entrepreneur and accomplished pilot, aimed to raise $200 million for St. Jude Children’s Research Hospital. Donating $100 million himself, he held a lottery for one of the four seats. Late Saturday, Musk tweeted he was donating $50 million, putting them over the top.

We loved space but it’s great to be home! 🌎 Incredible news on @elonmusk donation and surpassing the 200m goal for @StJude. Let’s keep it going! 🚀 On behalf of @inspiration4x – thank you all for the support and thanks to @SpaceX for bringing us home safe! Keep changing the 🌎

For the last seat, Isaacman held a competition for clients of his Allentown, Pennsylvania payment-processing business, Shift4 Payments.

“Best ride of my life!” Proctor tweeted a few hours after splashdown.

Best ride of my life! Thank you @SpaceX and @elonmusk! @inspiration4x https://t.co/kQFa9mo8GK

Strangers until March, the four spent six months training and preparing for potential emergencies during the flight — but there was no need to step in, officials said after their return.

During the trip dubbed Inspiration4, they had time to chat with St. Jude patients, conduct medical tests on themselves, ring the closing bell for New York Stock Exchange and do some drawing and ukulele playing.

Arceneaux, the youngest American in space and the first with a prosthesis, assured her patients, “I was a little girl going through cancer treatment just like a lot of you, and if I can do this, you can do this.”

They also took calls from Tom Cruise, interested in his own SpaceX flight to the space station for filming, and the rock band U2′s Bono.

Before beginning descent, Sembroski was so calm that he was seen in the capsule watching the 1987 Mel Brooks’ film “Spaceballs” on his tablet.

“What an amazing adventure!” he tweeted later.

What an amazing adventure! I’m so glad to be home on earth and to be back with my family. There is so much to share! What an amazing @inspiration4x team! Thanks @SpaceX!

Congratulations streamed in, including from the Association of Space Explorers to its four newest members.

Aside from trouble with a toilet fan and a bad temperature sensor in an engine, the flight went exceedingly well, officials said. Some of the four passengers experienced motion sickness when they reached orbit — just as some astronauts do.

“It was a very clean mission from start to finish,” said Benji Reed, a SpaceX senior director.

Reed anticipates as many as six private flights a year for SpaceX, sandwiched between astronaut launches for NASA.

The first is targeted for early next year with three businessmen paying $55 million apiece. Russia also plans to take up an actor and film director for filming next month and a Japanese tycoon in December.

Customers interested in quick space trips are turning to Richard Branson’s Virgin Galactic and Jeff Bezos’ Blue Origin. The two rode their own rockets to the fringes of space in July to spur ticket sales; their flights lasted 10 to 15 minutes.

The 60-year scorecard now stands at 591 people who have reached space or its edges — and is expected to skyrocket as space tourism heats up.