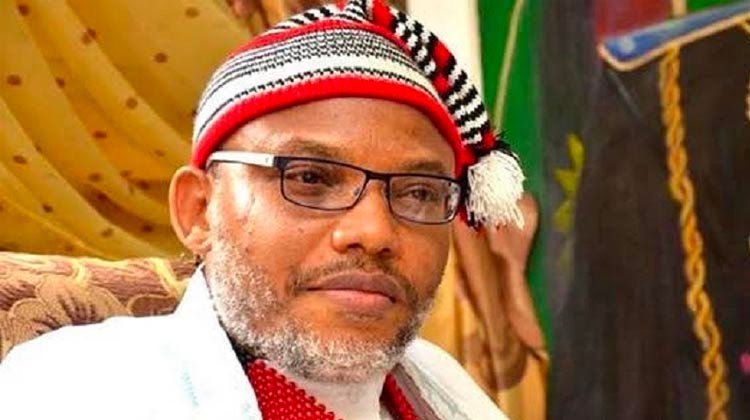 Maxwell Opara, a member of the legal team representing Nnamdi Kanu, leader of proscribed Indigenous People of Biafra (IPOB), has sued Department of State Services (DSS) over alleged violation of his rights.

According to suit marked FHC/ABJ/CS/1018/2021, which was filed on Monday, Opara alleged that his fundamental human rights were violated during a visit to Kanu in DSS custody on August 30.

Kanu has been in DSS custody since his arrest and extradition to Nigeria. He is on trial for treasonable felony.

Opara alleged that DSS operatives “forced him” to remove his outfit, including his “medicated eye-glasses, and his wedding ring”, while he was being searched.

He prayed the court for;

A declaration that the Respondents, whilst in the execution of their duties, must respect the fundamental rights of citizens and accordingly abide by the provisions of Chapter 4 of the 1999 Constitution of the Federal Republic of Nigeria as amended and the provisions of the Africa Charter on Human and Peoples Rights (Ratification and Enforcement) Act.

Opara is also seeking an order from the court declaring;

That the actions of the men, operatives and officers under the command commission of the Respondents on the 30th of August, 2021 during the Applicant’s visit to see his client in their detention facility, wherefore they commandeered the Applicant to a particular room within their facility; for purposes of alleged bodily search, wherein they forced him to remove his medicated eye-glasses, wedding ring, belt, jacket and shoes and accordingly left him shabbily dressed, harassed, intimidated and humiliated, amounts to a gross violation of the Applicant’s right to dignity of human person as guaranteed under Sections 34 of the Constitution of the Federal Republic of Nigeria 1999 (as amended) and Article 5 of the African Charter on Human and People Rights (Ratification and enforcement) Act Cap A9 Vol. 1 LFN.

Also joined in the suit is the Director-General of the DSS. No date has been assigned yet for the suit.

Just In: ‘The Wire’ And ‘When They See Us’ Actor, Michael K. Williams Found Dead At 54