Relying on intelligence, the anti-grant commission had filed an ex parte application before Federal High Court in Lagos to freeze the state’s account with Sterling Bank to stop further dissipation of the funds in the fixed account.

The agency accused the Kogi government of keeping the said amount in an interest-yielding account rather than the account opened to cater for workers’ salaries.

Granting the application, the judge, Tijjani Ringim, on Tuesday, ordered the state government’s account frozen and adjourned the matter till December 1 for the report of the EFCC investigation.

Reacting, Kogi state’s Commissioner of Information and Communication in the state, Kingsley Fanwo who addressed newsmen at Kogi Liaison Office in Abuja, described the claim as a deliberate attempt to malign the integrity of Governor Yahaya Bello.

Fanwo also said that EFCC’s claim of Governor Bello not disbursing the said bailout funds released by Federal Government in 2019 for payment of salary arrears owed civil servants in the state, are “false and malicious”.

According to the commissioner, the state government disbursed the said funds since October 2019.

To corroborate his claim, the commissioner showed journalists a copy of its bank statement. The bank statement was accompanied by a signed two-page letter where Sterling bank dissociated itself from the EFCC’s action. 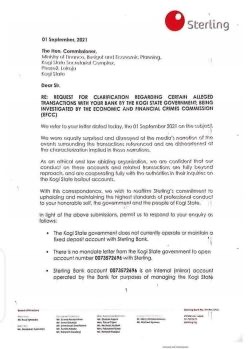 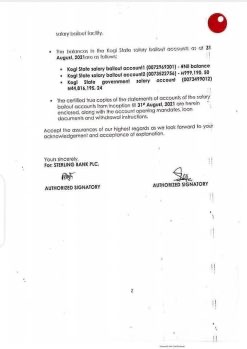