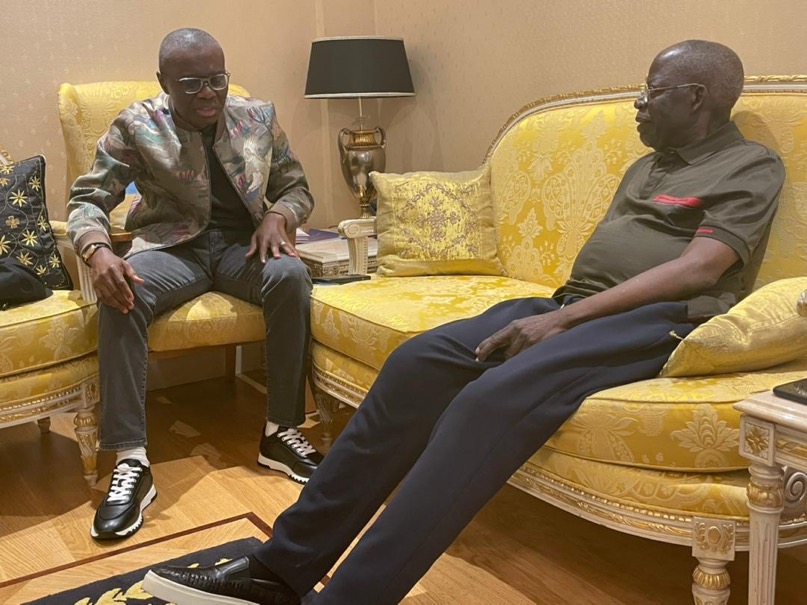 Sanwo-Olu disclosed this while briefing journalists at Lagos House Ikeja on his visit to the APC National Leader in London, the United Kingdom on Tuesday amid rumours that Tinubu was sick and hospitalised.

A few days ago, social media was awash that Tinubu was undergoing major surgery in Maryland, the United States over an undisclosed illness.

However, the governor debunked the rumours, adding that he and Tinubu both held talks on happenings in APC and across the country.

To buttress his point, the Lagos governor also shared pictures of him explaining something to the party’s national leader.

He is well, he is healthy and we conversed. We talked about what is happening in our party, what is happening in the nation and just to say to him that all is well. You saw him (Tinubu). Yes, indeed, I am the one you saw in the picture that I took when I visited our leader in London just to dispel all of the rumours that were flying around that he was sick and hospitalised.

I went to see things for myself. It is just to put the mind and heart of people to rest that there is nothing for us to worry about.

On when Tinubu would likely return to Nigeria, the governor didn’t give any specific date.

Rather, he said the APC leader will decide when he will return from his foreign trip, saying;

A man has discretion as to decide when to go out of the country and when to return. It is his call. Is he coming here to do Governor’s work? Can’t you see the picture we took together? The picture doesn’t lie.

The governor’s reaction comes four days after Tinubu’s spokesman, Tunde Rahman, said his principal does not have any medical problem requiring hospitalisation.

In a statement he issued on July 31, he warned those he described as mischief makers to desist from spreading fake news, noting that those who wish Tinubu dead should be careful.

Anytime he travels out of the country, the next thing some mischievous people would say is he is sick, hospitalized, or has died. It is shameful that perpetrators of this evil are not deterred by the fact that each time this fake news has been propagated, they have been proven wrong.

Who really is afraid of Asiwaju Tinubu? Those wishing Asiwaju Tinubu evil or dead should be careful. They should know the matter of life and death is in the hand of only God Almighty.