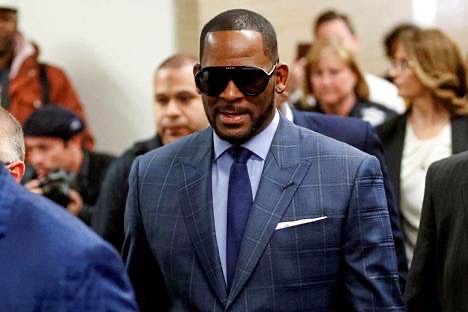 R. Kelly’s former tour manager on Friday said the disgraced R&B singer bribed a worker at a public aid office to get false identification saying the late singer, Aaliyah was of age, so she could marry the R&B star who is now on trial for sex crimes.

Testifying under a grant of immunity from later prosecution, Demetrius Smith — who worked for Kelly for more than a decade in the 1980s and 1990s — said he paid a worker $500 to secure the then-15-year-old Aaliyah Haughton a fake ID, used shortly thereafter to wed Kelly, who was then 27.

“I went to the welfare office, and I walked in, and I said, ‘Hey wanna make some money?’” Smith, now 65, said during the dramatic afternoon at the Brooklyn courthouse where Kelly is on trial for crimes including racketeering, bribery and sexual exploitation of a child.

Smith told the jury Kelly and his associates hatched the wedding plan because Aaliyah had said she was pregnant — and Kelly feared “jail.”

He believed marriage could stop her from testifying against him if criminal charges were ever filed over his relationship with the teenager.

It was “to protect himself; to protect Aaliyah,” Smith said.

He testified that he and Kelly left his tour and flew back to Chicago for the whirlwind 1994 marriage, which was later annulled.

Read Also: ‘I’m Fighting For My Life!”- R-Kelly Weep In First Interview As He Opens On Under Age Sex Allegations

Smith said he had urged the star not to marry Aaliyah, then Kelly’s protege with whom he forged a “playful” and “flirtatious” relationship, according to the witness.

“I said he couldn’t marry her and she was too young. He asked me whose side I was on”, Smith stated, adding that the singer’s associates were encouraging the union as a solution.

Smith noted that he feared “I was getting ready to be pushed out the loop” of Kelly’s career, so “I wanted to make it happen.”

The witness grew exasperated several times during the questioning, which will continue Monday, telling the court he wished to leave and saying “I feel like I’m on trial.”

The first week of the long-anticipated trial that included searing testimony from one of his accusers has offered a glimpse into the sprawling web of of physical, sexual and emotional abuse Kelly, now 54, is accused of steering for more than two decades.

The 54-year-old is charged with racketeering, sexual exploitation of a child, kidnapping, bribery and forced labor between 1994 and 2018.

He denies the charges, but faces between 10 years and life in prison if convicted on all counts.

The trial, expected to last a month, finally got underway after a delay of more than a year caused by the coronavirus pandemic.