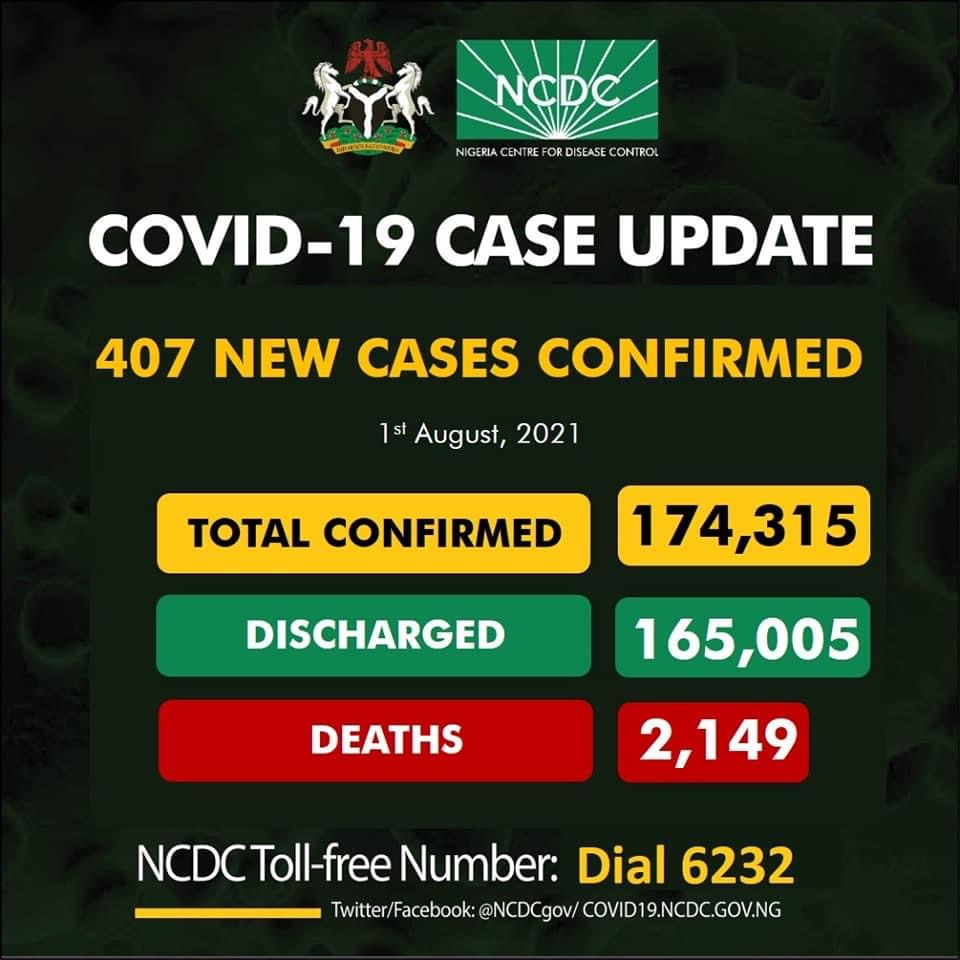 Nigeria on Sunday confirmed 407 new cases of coronavirus infections across 16 states of the federation and Federal Capital Territory (FCT).

Though the figure is less than the 497 recorded 24 hours earlier, it is still high compared to the consistent steep reduction in the number of cases that were recorded before the highly transmissible Delta variant found its way to the country.

The increased figures of daily infections are, however, being recorded at a time Nigerian doctors are set for nationwide industrial action beginning on Monday.

Nigerian Association of Resident Doctors (NARD) has called out its members to resume an “indefinite and total strike” on Monday to press home its demand for better welfare packages said to be contained in a memorandum of action signed with the government in April.

According to Nigeria Centre for Disease Control (NCDC) in an update on its Facebook page late Sunday night, the 407 new cases have raised Nigeria’s total infection to 174,315.

The disease centre, however, said no new death was recorded from disease in the last 24 hours, keeping the fatality toll at 2,149.

The last fatality recorded was on Friday when eight persons were confirmed dead from COVID-19-related complications.

A breakdown of NCDC data revealed that 16 states and the FCT contributed to the 407 new cases on Sunday.

Nigeria’s commercial centre and coronavirus epicentre once again took the lead with 160 cases out of the 407.

Kaduna State came 4th on the log with 18 cases and neighbouring Katsina followed with seven infections.

Delta and the FCT recorded four cases each while Ebonyi recorded three with Edo and Niger states recording two infections each.

Bayelsa, Nigeria’s oil-rich Southern state, and the North-central state of Nasarawa both recorded the lowest figure of one infection each on Sunday.

Meanwhile, according to NCDC’s data, of the over 174,000 new cases, 165,005 people have recovered and have been discharged from hospitals across the country.

However, with the recent increase in daily cases, active cases in Nigeria have jumped to 7,151.

Also, Nigeria has tested over 2.4 million samples out of its estimated 200 million population.

Meanwhile, Federal Government is scheduled to formally take delivery of a total of 4.08 million of Moderna vaccines donated by the government of the United States of America.

A notice issued by the executive director and chief executive officer of Nigeria’s National Primary Health Care Development Agency (NPHCDA), Faisal Shuaib, noted that the vaccines will be received at the country’s national strategic cold store near the Nnamdi Azikiwe International Airport in Abuja, the federal capital territory.

The vaccines have arrived Nigeria but will be formally handed over to the Federal Government on Monday.