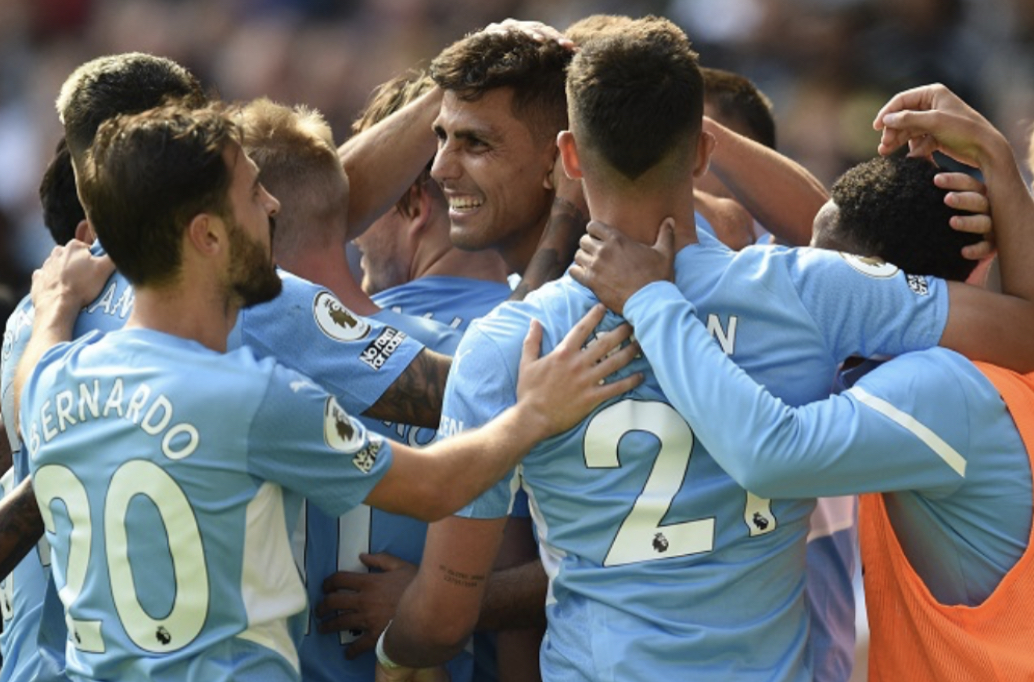 Manchester City has thrashed Arsenal 5-0 on Saturday at Etihad stadium, inflicting the Gunners’ worst start to a league season since 1954.

Mikel Arteta’s men have lost their first three league games and are yet to even score a goal with the pressure rising on the former City assistant manager’s job.

Arteta’s experimental selection and switch to a back three failed to halt a slick City attack that suggested they are more than capable of defending their Premier League title this season despite missing out on Harry Kane and Cristiano Ronaldo.

Arsenal’s task was made even harder when Granit Xhaka needlessly lunged at Joao Cancelo and was shown a straight red card.

Gabriel Jesus made it 3-0 before half-time before Rodrigo and Torres with his second of the afternoon rounded off the scoring.

City’s week had been dominated by transfer speculation as Kane confirmed he will be remaining at Tottenham this season with Spurs unwilling to sale the England captain.

Ronaldo was then rumoured to be making a sensational move to the Etihad but opted instead to return to Manchester United.

Yet, even without the injured Kevin De Bruyne and with Raheem Sterling and Riyad Mahrez on the bench, City showed the wealth of attacking options on offer to Pep Guardiola.

Arteta left the comfort of working alongside Guardiola for his first managerial job just under two years ago, but is increasingly in the firing line with Arsenal falling further behind the Premier League elite.

The Spaniard has reportedly been given until the October international break, in just over a month, to revive Arsenal’s fortunes after spending over £130 million in the transfer window.

Martin Odegaard was the only new signing named in Arteta’s starting line-up with Aaron Ramsdale, Nuno Tavares and Albert Sambi Lokonga on the bench and £50 million centre-back Ben White sidelined by coronavirus.

The selection of Sead Kolasinac, Rob Holding and Callum Chambers quickly backfired as the diminutive Gundogan outjumped Holding to head home the opener on seven minutes.

A massive mistake from Ederson nearly gave Arsenal a lifeline when his clearance was charged down by Emile Smith Rowe and rolled inches wide.

Xhaka’s ill-discipline then left his side with no hope 10 minutes before half-time.

The Swiss midfielder recently signed a new contract to end speculation over his future, but red cards have been a recurring feature of his six years in north London and his wild two-footed lung on Cancelo brought the 12th sending off in his club career.

Against the 10 men, Jack Grealish had the space to show why City spent £100 million on making him the most expensive player in Premier League history.

Grealish’s trickery left Chambers and Holding on the floor before squaring for Jesus to tap into an empty net.

City enjoyed a glorified training session after the break as Arsenal could barely get a touch.

Rodrigo’s inch-perfect curling finish from long range made it 4-0.

Guardiola introduced Sterling and Mahrez for the final half hour and it was from Mahrez’s perfect cross that Torres headed in off the post.

Taliban Take Over: ‘No Nigerian In Afghanistan’ – NIDCOM Says As Countries Evacuate Citizens