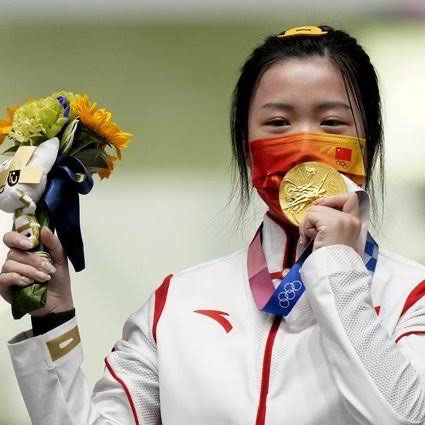 The 21-year-old Ningbo native, already an Asian Games champion, set an Olympic record score of 251.8, edging ahead of Galashina (251.1) in a tense final round, with Switzerland’s Nina Christen (230.6) claiming the bronze.

We have the first Olympic champion of #Tokyo2020!

Speaking after her victory, Yang said;

The last two shots I tried to control my emotions as much as possible and do well. Adjust, take a deep breath and stay as stable as possible. The last shot I was very nervous and held back for too long. I thought I lost and couldn’t catch up. I am quite satisfied with the finals. I was able to focus on my performance and not worry about the result.

It is better to be myself. My mental strength is better and I coped well. I am very happy to get the first gold and to give my best for the motherland.

The event took place the morning after the Olympics opened in a nearly empty stadium, following an unprecedented postponement and a build-up marred by scandal and controversy.

The first medal ceremony of the Games saw Yang presented with her gold by International Olympic Committee president, Thomas Bach.

Yang draped the medal around her neck after being handed the gold on a tray offered by Bach, in keeping with COVID-19 protocols in place at the Games.

Yang’s gold is China’s 23rd gold medal in Olympic shooting events and she follows in the footsteps of compatriots Du Li and Yi Siling in standing atop the podium in the women’s 10m air rifle.

Olympic Games is usually held in even-numbered years but the 2020 Tokyo Olympics were postponed to 2021 because of a one-year delay caused by the COVID-19 pandemic, which continues to cast a dark cloud over the world and even threatened to derail the postponed Games.

With fans barred from venues, only a handful of Chinese support staff were on hand to congratulate Yang after the win.